Creature From The Black Lagoon in 3D 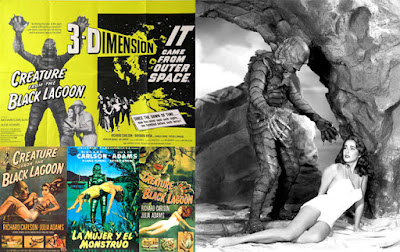 There’s a reason why I took my Universal Blu Ray box set around to a friend’s house and stayed the weekend just so I could watch one of my favourite Universal monster movies on her television. It was pretty much to relive, to a certain extent, a moment from my childhood. I’ve probably blogged this story before somewhere on NUTS4R2 but since this is one of the films in question, I think it’s worth repeating here...

When I was a youngster in the early to mid 1970s, when I was maybe 7 or 8 years old, my parents took me into London to see a very special screening. It was in, I believe, a cinema in Piccadilly which was better known for screening “adult movies” and it definitely wasn’t the kind of place you’d expect to see this happening. The screening was a double bill of two movies projected in their original 3D format... Creature From The Black Lagoon and It Came From Outer Space. Now, you have to remember that this was the 1970s... 3D was a phenomenon pretty much unseen in cinemas since, maybe, the late 1950s? It was a few years before Star Wars would come out and make a splash on the art of cinema and a rare screening of a 3D movie was definitely something which was an education for this mere slip of a boy.

And this wasn’t the polaroid glasses of colour 3D movies or even the red and blue glasses that came out in the 1980s for certain 3D novelties... these were original prints from the 1950s and we had cardboard glasses with red and green surfaces in them. Now I have to say the fact that these were old movies certainly showed somewhat... It Came From Outer Space was pretty crystal clear but the Creature From The Black Lagoon print was kinda faded, from what I can remember. That didn’t necessarily make the movie lose its 3D but it was more of a struggle to watch without giving yourself a massive headache. But it really didn’t matter... I must have been the only kid in school who saw a 3D movie at that age (let alone two) and I’d always loved these kinds of movies anyway. I think it was the first time I’d seen either of these two, perhaps.

And that’s why, when I found out the basic set of Universal monster movies released on Blu Ray had an option to watch this one in 3D... I immediately rang up my friend and invited myself around. Now, I have to say that it’s ten times better here than I ever remember seeing it. Presented in its original widescreen aspect ratio, which means you don’t get to see the telephone poles rearing up above the undergrowth in the uncharted Amazon in certain scenes, the 3D on this one pops out like it’s not done in a long time and gives me a closer experience, I would suspect, to the movie if I’d seen it on it’s original run, some twenty years earlier than the screening I attended in the 1970s (for the record, I wasn’t born until 1968, people!). Certainly, the whole movie on this newish release looked crisper and more vibrant than I’ve ever seen it looking before and the lady I was watching it with was totally blown away by it, judging from her comments. And not, I hasten to add, on the quality of the 3D (although she did specifically mention how good that was compared to recent movies she’d seen in the format) but also the movie itself... which is nice.

So about the movie... I’ve always had a lot of love for the classic Universal monster movies and this one goes in the same niche as all the others... one of my “comfort horror movies” which I like to watch, not to be scared of (they really aren’t that scary these days) but as something I can sit back to and lazily drift along with, without having to think too hard. Being as it’s the first of the Creature From The Black Lagoon trilogy we’re talking about... I guess you could call it my creature comfort.

The film is based on a tall tale/urban myth that producer William Alland heard at a party one night about a ‘real’ half man/half fish creature and thought the concept would make a great horror movie. Alland went on to produce a lot of sci-fi tinted 1950s creature features but, if readers want to put a voice (at least) to the name, then he played the faceless voice of the interviewer who links all the pieces of Orson Welles classic movie Citizen Kane together... the newspaper reporter, hot on the trail to find out what Kane’s dying word meant.

Anyway, the film was scripted out, cast and produced in 3D and it was a fairly modest hit...  at least enough of a hit to spawn two sequels, Revenge Of The Creature (also originally released in 3D and a great follow up to the original) and The Creature Walks Among Us (which I think is the worst of the three, especially in terms of the monster make-up devised for this third outing).

The film starts off with the birth of the planet and explosions... well, it’s a 3D movie after all. They are constantly having to find things to chuck out of the screen at the audience. This is followed up with the discovery of a 3D ‘popping’ fossilised hand, a clawing living creature hand, the death of some explorers at the hands of the unseen creature and a new expedition to find the rest of the fossilised creature. This takes our fish scientist leading man, played by Richard Carlson, his boss played by Richard Denning and the object of both their affections, Carlson’s fiance played by Julie Adams, on a journey that takes them into close contact and unparallelled peril as they first try to catch the creature, who is fixated on Julie Adams’ character in much the same way that the titular giant ape was fixated on Fay Wray in King Kong. And after the reality of their situation becomes somewhat clearer, then they are just trying to escape it as the creature blocks off their exit from the lagoon which he calls his home.

While the film does trade in the whole beauty and the beast angle which set the cinema screens alight over twenty years earlier in King Kong, it doesn’t follow the same template where the creature is brought back to civilisation, escapes and goes on the rampage... they saved that one for the first sequel. That being said, the creature, beautifully designed by Millicent Patrick (mostly), certainly elicits the same kind of sympathy from the human audience that Kong did back in 1933. That’s one of the strengths of Creature From The Black Lagoon.

Another great strength of the movie would be the underwater sequences which are truly amazing and were the first of their kind in 3D. It was groundbreaking stuff and you can’t help but admire the amount of effort that went into these underwater shots... especially for the various actors in the creature suit. It was very much a case of shoot, air hose, shoot, air hose etc. A truly gruelling time from what I understand. However, when you see sequences like the “underwater ballet” as the creature swims below Julia Adams and her stunt double, mimicking the movements of the character just under her... and then gets bolder and touches her ankle... well, it’s totally worth all the effort and its a truly startling film, for its time.

The music in that particular scene is a little reminiscent of the two note motif John Williams used in Steven Spielberg’s Jaws and one wonders if he was aware of that at the time. Certainly the music of this movie is excellent, produced as a patchwork by various composers (as was the norm for these kinds of productions) by the likes of Hans J. Salter, Frank Skinner and even a young Henry Mancini. I was particularly please when I watched it again this time around that my friend actually agreed that the music was pretty good and, seriously, the three note stinger theme for the creature, played over and over throughout the course of the picture, is definitely not going to be something you’re going to forget in a hurry. If you want to get a really faithful rerecording, miked in the right way, then you can grab a beautiful CD of some selected highlights from the score by clicking this link to the record label Monstrous Movie Music here.

The film is an absolute pleasure to watch every time and with character actors like Whit Bissell popping up, it’s one I’m never going to get tired of, especially when the design of the creature itself is so provocative and beautiful. And having this new 3D transfer finally makes it worth having the scene near the end when the terrible, terrible bat special effect pops out of the screen to startle our creature hunting crew... it doesn’t make the effect look any less cheap but, hey, at least now it’s serving its practical function once more.

Honestly, I can’t heap enough praise on this movie and, frankly, nor do I have to. If you like the movie or have enjoyed this review, there’s a big behemoth of a book currently available at the time of writing this review called The Creature Chronicles: Exploring The Black Lagoon Trilogy by Tom Weaver, David Schecter and Steve Kronenberg which can tell you all you’d ever want to know about this particular series of films. The book is available from amazon here (UK) and here (US) and my review of it is here. I’m pleased to say that I had some feedback on that particular review in an email from one of the writers and they seemed pretty pleased with what I had to say about it so, seriously, if you trust me and you like these kinds of movies, go check the book out for yourself.

And that’s all I’ve got to say about Creature From The Black Lagoon. A truly beautiful, black and white movie with a team of rugged scientists, a beautiful woman and a wonderful gill man at the heart of the story... all hanging together pretty well, very entertainingly performed and with a score as ear catching as Julie Adams is eye catching. Definitely a fine moment in horror history and one to watch if you’re into cinema in any way, shape or form. A genuine classic and always a pleasure to watch... in its 3D or 2D version.
Posted by NUTS4R2 at 19:30