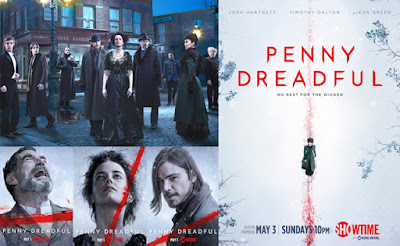 Warning: Yeah, okay. So this review of
Season 2 will go the ‘spoiler route’.

The second series of Penny Dreadful is something I was especially interested in seeing because, although the little sub-plots involving the Frankenstein monster (played by Rory Kinnear), Dorian Gray (played by Reeve Carny) and Ethan Chandler (as played by Josh Hartnett) all obviously have a much longer course to run, the main story which brings together Chandler, Vanessa Ives (Eva Green), Sir Malcolm Murray (Timothy Dalton), Sembene (Danny Sapani) and Dr. Frankenstein (Harry Treadaway) was pretty much finished with in the first series.

Now I was told that this second season is much stronger than the first but, although there is much to recommend in this one, I found it to be a little less compelling in places. Certainly the pacing, especially in the last few episodes, seems more than a little sluggish when compared to the previous series and although there is the sex, gore and action which helped make the first run so watchable, there seems to be less of this happening in this one and much more plotting and talking. Not that I mind this at all but I did find it a little duller than the first year, if truth be told.

One of the problems I had was the way in which the writers forged a new plot/danger to ensure our heroes stay together, for the most part, to defeat the latest menace together. After a strong opening which sees Miss Ives and Mr. Chandler attacked in a coach by naked witch creatures, we are eventually treated to a whole load of extra back story about Miss Ives which establishes that she is a practitioner of ‘witchery’ and which gives her a new enemy acting as a representative of ‘the devil’ who is already trying to claim her soul. It seems somehow clumsy to me that this is all brought into play only now, when so little of this has been mentioned after the lengthy examination of her back story in the first series. However, it does at least make use of Helen McCrory as Evelyn Poole, reprising her role from the first series and being given a more personal history with Miss Ives.

A couple of things which were pretty predictable in the first season do come to pass in this...

First and foremost of those being Billie Piper reincarnated from her previous dead character to become Lily... the latest iteration for the Bride Of Frankenstein (or at least the Bride Of Frankenstein’s monster... although not quite). With this performance, her character appears to be one thing but, as we learn later in the season, looks can be deceptive and Lily has a far less passive role in the impact of her life on others than you might at first suspect. The real problem with this character though is that although Billie Piper does an amazing job with her (I wouldn’t expect anything less from the lady in question), she does seem to be suffering from Clark Kent/Superman syndrome throughout the whole production. That is to say, in the DC comics involving Superman we are asked, for some strange reason, to assume that when he is wearing glasses, he is somehow disguised from being mistaken for Superman. This makes no sense, of course...

Similarly, in this incarnation as Lily, the previous version of the character, Brona Croft, is not in any way recognised by anyone other than, perhaps, that there is a strong probability that Dorian Gray does and can see something has happened to her. But only Dorian. Why? Because she’s had her hair dyed blonde... um. What? So, for instance, after having picked out dresses for her, when Miss Ives is asked by Frankenstein to meet his ‘cousin’, she doesn’t immediately say... “Oh, I remember you. You were my current love interest’s girlfriend I met outside the theatre in the first season... how come you’re not still dead?” Instead, she has no idea and goes about her business, Lilly’s golden tresses fooling even this cunning character. Um... yeah, okay.... moving on.

I said in the last interview that Ethan Chandler looked like he was well on the way to becoming another staple of Universal Horror after his werewolvery was finally revealed (or rather confirmed) at the end of the last series. I was, in fact, referring to the character that Lon Chaney Jr made famous as The Wolfman... Lawrence Talbot. Well, in this one the connection is tracked down by an interesting, one armed detective character, who himself seems to be a quick, half hearted nod to Lionel Atwill’s character in the 1939 film Son Of Frankenstein. Turns out Ethan’s Chandler’s real name is 'Ethan Lawrence Talbot'... so, yeah, as far as I know, Hartnett’s only the third person to play this role which, for most of film history, was played almost exclusively by Chaney Jr. Josh Hartnett’s role is more developed as a character in this one, where he’s shifted over from being the ‘hired hand’ to being a friend and protector to Miss Ives. He also makes friends with Sembene... a friendship which has tragic results in a much more traditional kind of problematic manifestation for the Lawrence Talbot character.

So yeah, we have intrigue and mayhem and we finally get to see ‘the portrait’ of Dorian Gray. Only a fleeting glimpse but it’s not done too badly although the character is almost something you feel the writers don’t quite know what to do with yet. He’s been pretty much at the periphery of the other character’s lives for two series now but you at least, at the end of this one, get the impression that he’s going to be thrown into the mix more when the next series hits, due to his unholy alliance with Billie Piper’s Bride of Frankenstein character.

All in all, there was enough to keep me interested in continuing to watch this second series and, once again, I really don’t know where they are going to go from here, being that each set of characters seems to have split up and gone to different parts of the world. The first trailer to the third season looks like none of them are together and I just hope that the series manages to find a credible way to reunite them all again at some point and, hopefully, fairly early on in the season... it’s the chemistry of having all these strong actors and actresses integrating with each other and also having to deal with their own subplots, in my opinion, that is one of the main strengths of the show.

Since I don’t have the fancy channels where programmes like this are broadcast, and I certainly don’t want to be left a the mercy of commercial breaks anyway, it looks like I’ll have to wait until near the end of the year before I’ll be able to catch up with Series 3 of Penny Dreadful but, certainly, this previous season was, at the very least, good enough so that I still want to. Although I think they could have done a little more with the creepy little dolls than they managed here.