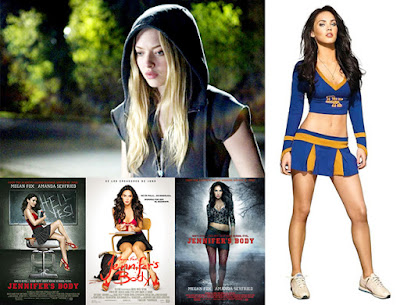 Body Of Every Dense

Yeah, okay. This is a much unsung gem of a movie as far as I’m concerned. I literally put this on because I didn’t need to watch anything further for a while where I’d have to write another review of it... the list is long enough at the moment. I just wanted to put on something to relax with and I remembered unexpectedly liking this a lot when I saw it on its initial cinema run. However... this is what happens when you get old and cranky, folks. After I finished the movie I went to have a look at what I had to say about it at the time and... it turns out it’s actually older than my blog and I hadn’t actually reviewed it before, after all. Since this is such a great little movie though, and something you don’t hear much of from people at present, I figured I should at least try and do it some justice on this column so... here we all are.

Jennifer's Body is writer Diabolo Cody’s next script to be filmed and released after her breakthrough script for Juno and... I have to wonder why it’s not more well shouted out by enthusiasts of the horror genre. It stars Megan Fox as the titular character, coming out soon after her second and final Transformers movie and, although she plays exactly the kind of ‘high school prom queen’ stereotype you almost expect her to be playing, she’s actually not the main protagonist of the film... that part is played by the amazing Amanda Seyfried as Jennifer’s ‘best friend forever’, Needy. The story starts with a framing device of Needy telling us her sad story as to why she is locked in a mental hospital with a reputation of being a violent ‘patient/prisoner’. Megan Fox is actually the main ‘antagonist’ of the movie and, frankly, she also does a great job of hitting all the beats you’d possibly expect her to as a credible movie villain and, although she is kinda overshadowed by Seyfried’s absolutely blistering performance as the cute nerd turned psycho avenger... Fox deserves a lot of credit for her turn here too and the chemistry between the two of them here is a testament to both them, I think.

The story tells of a small time rock band who play a concert at Jennifer and Needy’s hometown of Devil’s Kettle, with the real agenda of making off with one of the local virgins and sacrificing her in a bloody ritual to Satan as an exchange for rock n’ roll fame and fortune. However, when they burn the place down and make off with Jennifer, thinking she’s a virgin, they make a big mistake because, it turns out, if you sacrifice a non-virgin to the Devil, then the corpse later returns to life hosting the powers of a succubus but retaining the basic personality of the original host. That means she becomes a superpowered demon who has to seduce and kill men in order to keep her vitality. That being said, this version is a little toned down from the traditional succubus of legends in that, instead of killing men by taking their sexual energy (constantly draining them of semen etc), it’s more of a Hollywood demon style of deal, with lots of vampiric goriness, gut ripping and innards munching, on the part of Jennifer.

So of course, when Needy finally figures out what’s going on, thanks to a mostly unexplained, semi-psychic link she seems to have with Jennifer (as a lot of best friends seem to have, methinks),  she then has to read up on the occult and become a kick ass femme fatale in order to stop the evil that Jennifer has become. However, will she have worked it out in time to save her own boyfriend from becoming the next in Jennifer’s long list of tasty morsels?

The film is a great character piece with some wonderfully self aware dialogue and a strong shot of black humour running through it. If you want to see deadpan comedy masquerading as one of the many community victims of tragedy, then you have to see J. K Simmon’s performance as Mr. Wroblewski, which becomes even funnier when you realise that he has a hook for a hand at the end of his first scene. I don’t know why this detail amuses but the timing is impeccable and the irony of the reactions to the situations some of the teacher and parental figures in this movie find themselves in are bound to bring a smile to the face of even the most humourless audience members. I’ve said it about just a few films over the last 5 years on this blog but this movie is very much a Heathers or even Harold And Maude for the generation of moviegoers it’s aimed at. A smart and ironic black comedy which doesn’t back down from being just a little edgy in the majority of the places where that would matter. I think Diablo Cody’s screenplay is hitting the cross genre high school/horror/comedy nail right on the head with this one and, thankfully, the performances and direction on it really live up to the quality of the script.

And I don’t really have much else to say about Jennifer’s Body, I’m afraid. Can’t think of any real problems to highlight here and, although the shot design isn’t all that flashy, it’s very clean and leads the eye in nicely to where the director wants you to focus in the film. Definitely one for fans of horror and/or the teen comedy genre (which is a genre I usually like to stay away from, truth be told). Despite it’s sharp dialogue, it’s a bit of a switch your brain off and relax movie, really... but that does nothing to diminish the fact that it’s a tremendous amount of fun and well worth your time if your fun quotient isn’t already in overload. This is not the film it looks like it's going to be if you're one to judge a book by its cover (or a film by its advertising promotion) but you won’t go too far wrong with this one, it has to be said, and most people will find themselves ‘in’ on the joke for the running time of this movie, I would suspect. Definitely worth some time.
Posted by NUTS4R2 at 19:00