Bazooka Joe and his Gang 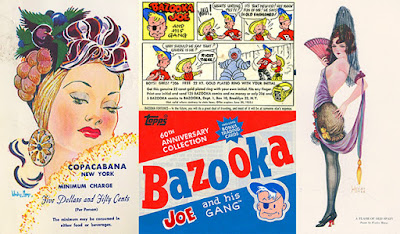 Gum Play With Me

This was one of those rare purchases where I was recommended something from Amazon and they actually got it right... piquing my interest enough that I ordered this from their online store. Bazooka Joe and his Gang - 60th Anniversary Collection, published in 2013, is not just a set of reprints of the original first run of the teeny tiny Bazooka Joe Bubble Gum comics, at a larger size. It’s an interesting look, from several people in some way related to the phenomena, at the history of Topps Bazooka bubble gum and the various, associated paraphernalia of the same historical period.

The book starts off, after a few reprints of the character introduction comics of the original Bazooka Joe 'gang', with an essay by Tally Morse about his father, Wesley Morse. Wesley was the original artist for the Bazooka Joe comics of the fifties and, although he died in the early sixties, he worked on enough material that fresh Wesley Morse Bazooka comics were still being published into the 1980s. It's absolutely fascinating to read about this artist, who based his initial, try out sketch for the character on his son before his boss got him to change the beany cap to a baseball cap and add an eye patch. We get a fascinating peek at his early life and how he lost his wife prematurely, a showgirl from the famous Ziegfeld Follies where he worked producing their iconic poster art, and how he used to ask his then eight year old son for advice on occasion. A son who fondly remembers his father's cigarette stained drawing board.

Unbeknown to his young son at the time and something he found out later, Wesley was also one of many artists (only two have been properly identified), who used to work on the Tijuana Bibles of the time. Tijuana Bibles were popular, small, 8ish pages, underground pornographic comics produced between the 1920s to 1960s, which were very popular in the US during the depression. They would often depict famous celebrities or comic book characters of the time and, if you think of it, the style and format of these things were not a million miles away from the Bazooka Joe comics which the elder Morse was, sorta anonymously, most famous for (that and his iconic work for Ziegfeld).

This is all great stuff but, as I said earlier, the book has a number of varied sized essays dealing with, not just Wesley, but a whole host of fascinating aspects of the company and also looks at some of the other writers and artists who have worked for the company in a similar capacity. You will discover how the characters were updated successfully and not so successfully over the years. You will also learn about the throw away nature of the cornball writing and the lack of long term continuity between the strips due to the policy that each comic would be written as though it could be the very first one that a person had opened... which is a very interesting writing limitation when you think about it and, obviously, helped shape the stylistic content of the writing throughout the history of the company. It also made me wonder how, without any character progression, Joe could suddenly find himself transformed one decade into a contemporary teenager, flipping burgers and playing video games. A comparable shock to the system came to me one year when I found that the clean cut Captain Birdseye had suddenly transformed himself into a stubble chinned man thirty years younger than how he had previously looked... his white hair replaced by black.

The book also includes the way the gum was manufactured, how it caught on and, of course, the origins of its name. Many people might think of a military connection when they first hear or read the name Bazooka. However, the name derives from an invention of the then popular US musical comedian Bob Burns. When a stringed instrument broke, he had to improvise and got a bit of drainpipe, shoved it full of sheets of music and blew down it to make a bass note. It sounded so good he made a proper version with a funnel. A slang term for someone who was just 'blowing a lot of hot air' at the time was bazoo. Burns then made it sound more like a musical instrument by giving it a similar sounding suffix to certain instruments such as the balalaika or harmonica. Thus, the Bazooka was born and, when the military finally got around to testing their new weapon, which looked a little like Burns' instrument, one of the people at the test referred to it as a 'bazooka' and the name, apparently, kind of stuck. And, of course, Topps used it as the brand name for their 'atomic bubble gum'.

The book is handsomely illustrated with colour reprints, illustrations and photos throughout... including photographs of what some of those items you saved the comics and sent in cash for really looked like when the customer received them in the mail. It also gives you the chance to see some of the comics in original sketch form, then as a colour mark up and then as the final, printed version. It’s interesting to compare these to see how the artist gave these original panel sketches definition... and to see any changes made between the sketch stage and the end product. It's also fun to sometimes see the same jokes updated or recycled over the years, sometimes using different characters and sometimes using the same basic gag idea but coming at it from a slightly different angle.

Other things on show here are various foreign language versions of the comics. Ofttimes these will just mean translating and then distilling the essence of the American English dialogue, which often would take up less room than a foreign translation. Other times this would mean changing the artwork entirely, by the looks of it, depending on which country was being targeted. There's also an insight into writing the 'fortunes' on those things, by the same guy who wrote the infamous "I am held prisoner in a bubblegum factory" fortune.

This beautifully designed book even highlights various satirical 'pokes' at Bazooka Joe over the years and finishes up with a visual timeline of the majority of the Bazooka products through the decades which shows the various wrappers in context with each other so you can see how the product changed and progressed. All in all, Bazooka Joe and his Gang - 60th Anniversary Collection is an amazing find, as far as I'm concerned and something I even found informative about areas of American pop culture I am a little shady on. A wholehearted recommendation from me, for anyone old enough to remember the kid with the eye patch and the guy with his sweater pulled up over his mouth. An absolutely amazing little archive of US pop culture history, as far as I'm concerned.
Posted by NUTS4R2 at 12:27