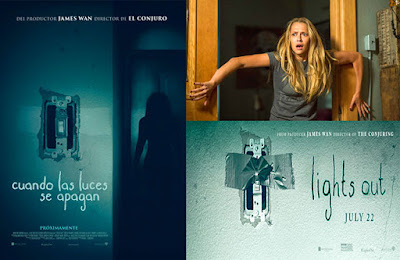 ‘Fraiders Of The Ghost Dark

And so on to Lights Out. I’ve not seen the original three minute short film by the same director, which he has chosen to expand into his first feature film, but this is certainly a horror movie which had an effective trailer and kinda lives up to ones expectations of it, to a certain extent. It’s the old horror cliché of 'things' which can’t be seen doing what they’re doing until it’s too late, which is on display here.. as seen in a gazillion horror movies when the monster lives in the shadows and intrudes on the fractured reality of the protagonists when they, but not the audience (who are already in a heightened state of tension), least expect it.

The ghostly and very real, in terms of the harm it can do, monster in Lights Out is an entity which can only function in the dark. Perhaps the most recent cousin to this creature is the invention, by writer Steven Moffat, of the Weeping Angels in the British science fiction series Doctor Who. In that show, those specific creatures appear as statues and are quantum locked so that they are not able to move if they are being observed. Once a person's attention or line of vision isn’t focussed on them, however, such as when a person blinks or is in a dark room, they move very fast and "come to get you." The creature in Lights Out is pretty much another variant of these creatures in that she, her name is Diana, can only function in places where light, or at least most forms of light (as it happens, without spoiling an obvious moment which a few of you might not see coming), reduces the creature's functionality and, as importantly, visibility, to zero. So... you know... watch out for those shadowy areas of a room... which reminds me of another Doctor Who creation called the Vashta Nerada but I don’t think this is a direct homage or steal... just two different writers finding common ground in the way they approach their, genuinely suspenseful, horror tales.

One of the more impressive ingredients of Lights Out is that the main characters in the movie don’t fall into the old cliché of disbelief until proven otherwise, for the most part. Indeed, it’s shown quite demonstrably that disbelief leaves you ill prepared and ready for a body bag in one sequence where a couple of characters enter the haunted lair of the Diana-monster and don’t return in one piece. So it’s nice that the main characters consisting of Martin, played by Gabriel Bateman, his ‘mentally challenged’ mother Sophie, played by Maria Bello, his step sister Rebecca, played by Teresa Palmer and her boyfriend Bret, played by Alexander DiPersia... are all on each other’s wavelengths from pretty early on in the movie. Asides from a pre-credits sequence which features prominently in the trailer for the movie, people fall into their roles in finding out how to best defeat Diana fairly rapidly in this and, it has to be said, I found this a much more refreshing approach to the ghostly shenanigans on show in this movie.

Of course, one of the biggest clichés going in horror films since they first began, the wandering around a place in the dark, is neatly circumnavigated by the writer and director by turning it into one of the main ‘rules’ of this creation. Indeed, the various protagonists in the movie spend almost their entire time trying to keep the lights on in whatever environment they find themselves in and this, of course, means that the audience doesn’t question the movie so much when they find out that, once again, Diana has found some way of disabling all the lights. So, naturally, the writer and director take full advantage of the way the spooky shadows and shapes, as our heroes and heroines wander around with candles, flash lights and whatever else they can find, are cast against the audience’s collective peripheral vision in an attempt, quite often successful, of wringing the full amount of suspense and fear they can out of them.

If it fails, sometimes, to provoke the necessary reaction, I thinks it’s down to how seasoned some horror film watchers are and their relationship with other recent films of this ilk which are, perhaps, done a little more expertly in some places... although this movie certainly makes up for it with its enthusiasm. Where it falls down a little, though, is with the origins of the character which, while seeming to be all out in the open for the dissection of the main characters and those of us watching them, are actually a little more hazy and shrouded in mystery than you might at first realise. For instance, the science fiction concept which has created Diana is something not entirely unlike what happens to the Dr. Manhattan character in the comic book Watchmen and, of course, the movie counterpart. However, while the movie doesn’t go into specifics about the ‘incident’ which caused the creation of this malevolent apparition, allowing one to infer the rest as something which is best left to the imagination, it does tend to gloss over some pretty essential information surrounding the relationship between Diane and Martin’s mother, Sophie. Since the ending of the movie absolutely hinges on this specific relationship, it has to be said that I quite often found myself questioning the ‘up and down’ status of this ‘ resurrected friendship’ in terms of the credibility of the main premise. Without this central relationship, you can’t have the ending which this film seems to tell us is the solution to everyone’s problems... but it did feel bereft of common sense in terms of the mother, for a lot of the time, so it didn’t quite ring true to me in that regard.

However, this is a really minor grumble and, although it’s not exactly the scariest of this year’s horror movies, it’s certainly a nicely executed one in general and, even though the genre rules are mostly adhered to, it does so in a way that doesn’t necessarily make you feel like you’re covering the same old ground again in terms of movies designed to make you jump out of your seat. I mean, yeah, alright, we absolutely are covering the same old ground again... but it does it in a way that makes it seem less important in terms of the variations of the characters you usually get in this kind of movie. There’s also a nice moment involving an electronic car key and its use as a means of survival at one point that was certainly worth the price of admission, as far as I’m concerned. That and the wholly appropriate and unsettling, at times, score by composer Benjamin Wallfisch, which I thought was pretty good.

So is Lights Out the most terrifying movie you’re going to see this year? Not even close. It will, however, certainly give you an entertaining night out at the cinema and, although I personally don’t need to see it again, I don’t have any qualms about happily recommending it to anyone who is contemplating going to see this one... even if they are already fans of the genre.
Posted by NUTS4R2 at 18:38