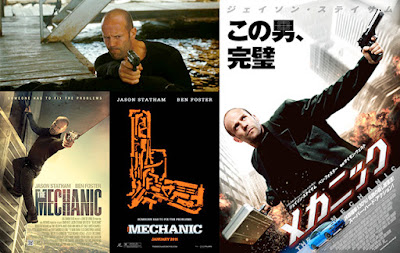 Gunning Up That Kill

I have to throw my hands up in the air with this one and say that I haven’t seen the original 1972 Charles Bronson movie on which this one is based. I will try to take care of that at some point, though. Now, the reason why I find myself watching this version of The Mechanic at this particular time, especially since it’s a movie that I deliberately ignored at the cinema due to its being a remake, is because I saw a bus side advert the other day for a sequel, Mechanic Resurrection, and... well, I like a good Jason Statham action move as much as the next person.

This one actually isn’t bad. Director Simon West is not a director I have had any problems with in the past, unlike some high profile critics who seem to be allergic to him. I’ve only seen a few of his movies but I’ve quite enjoyed them. This one is no different and although I’ve seen at least one movie where Jason Statham wasn’t able to save the picture (that would be War), it’s hard to actually waste an actor of this talent and neither Statham or the director drop the ball here.

The movie tells the story of a professional, elite assassin called Arthur Bishop, played by Statham. He is depicted as a sophisticated killer who tends to take out especially nasty people when called for by his ‘supplier’, Harry, played by Donald Sutherland. We know he’s a cultured man because he listens to vinyl records of classical music and works on his vintage Jaguar in his spare time.

As Statham’s voice-over narrative tells us, among other things, there are various ways to kill people and different kinds of hits required, depending on the kind of message you want to send. This is demonstrated in a somewhat clichéd opening sequence which follows Statham killing a man who the writers have already implied, via visual short hand, is not a nice person. The man drowns in a cleverly baited kill by Arthur and there’s a nice sequence where he swims under the corpse of the man he just killed, using the arms to swim so that it looks to the target’s body guards that he is still alive.

We then have the similarly clichéd moments where Sutherland’s character pays Arthur and we see that the two have cultivated a genuine friendship over the years. All this is just another set up by the writers, of course, because Sutherland becomes the subject of the next hit, which Sutherland’s partner asks Arthur to carry out, showing him how Sutherland sold out his colleagues and had them killed. Arthur doesn’t want to do it but he takes the job before somebody else does and gets Sutherland to ‘escape’ from his own building's security system, thus luring him into the open as a target for Arthur. Sutherland doesn’t try to stop what’s going to happen and says he’d rather it was Arthur than someone else.

Yes, I know it’s all very obvious and you know exactly what’s going to happen next, pretty much all the way through the movie, but Statham is such a charming actor and the movie is packed with enough set pieces, both action led and character led, that you kind of forgive it its faults and let it run through without really questioning it, I think. At least that's the spirit that I watched it in.

However, Sutherland’s death leaves a loose end... his thuggish son Steve, played by Ben Foster. Arthur Bishop grudgingly takes him under his wing and teaches him how to be a professional hitman, although Steve tends to mess things up a lot and almost paints a target on their backs in terms of the way they are being perceived by the rest of the profession. Arthur has a good piece of advice which I’ll share here because, although it seems to not mean much at first, it does push an interesting point in terms of why someone should actually listen to what their mentor tells them... “Good judgement comes from experience... and a lot of that comes from bad judgement.”

The story goes on to then expose the sell out by Donald Sutherland as a faked plot to gain power by the partner who sent Arthur in to kill his boss. So Arthur and Steve have to find a way to take out the man who set Sutherland up but... will Steve find out that it was Arthur who killed his dad? And, if he does, how do you think he’s going to react.

Well... somewhat predictably, it has to be said, although as I mentioned before, this doesn’t matter much when you have an action filled script with the likes of Jason Statham, Donald Sutherland and Ben Foster making it all come to life as skillfully as they can. The director utilises some nice colour schemes in different sections of the movie and he uses the juxtaposition of them to good effect throughout the running time. For instance, a bar that Statham hangs around in is bathed with a yellow light while a parking bay in a multi-story tower block is painted and lit in neutral blues and whites. There’s some really nice lighting in this movie and the director keeps these different colour schemes coming which, in turn, keeps everything relatively fresh and watchable.

At the end of the day, the film is about betrayal and the way it leads to similar betrayals, of a kind. It’s about friendship and the complicated stuff that gets in the way and, although it seems like it should be quite weighty... it really isn’t. It’s a light piece of fluff but, even so, it’s the right kind of light fluff, to be fair and it also has a nicely put together score (released on CD in two different, complimentary versions, apparently) by Mark Isham that is quite listenable away from the film, too, I suspect. It has almost an old, silver age sound to it, which is quite refreshing, while still retaining a modern edge that keeps it relevant and, more importantly, appropriate to the on screen shenanigans of these two, scallywag assassins.

Ultimately, The Mechanic is not as wild or addictive as other Statham action movies like The Transporter and Crank films but it’s not too far off in tone and if you like those, then you will probably have an okay time with this one. As for me, 'mission accomplished' and I’m all geared up to see the sequel, which opens this Friday in the UK. I’ll let you know how that one goes.
Posted by NUTS4R2 at 19:30