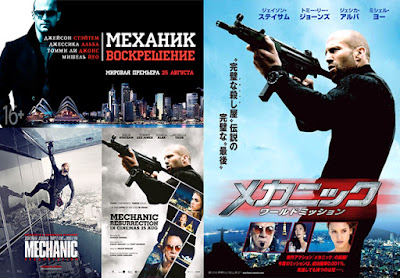 Mechanic Resurrection has less of a useful title than if it had been a sequel to the original Charlie Bronson film The Mechanic, rather than Simon West’s sequel starring Jason Statham. That being said, the title does at least hold some relevance in that an assassin who wishes to retire from the game wants people to think he is dead, I would guess. So there's that.

The footage from the last movie of Statham rolling from his car just as it’s about to explode at the gas station is used as leverage in the early stages of this movie... but not to as good effect as the second bait to lure him in to do a ‘three hit job’ for an 'old acquaintance'. And that’s basically the plot, pretty much all of it, with Jessica Alba as the lure and Michelle Yeoh as the person who falls for that lure, more so, than Statham’s Arthur Bishop character does... thus yanking her friend Bishop into the trap set for him.

This film is a completely different kettle of fish to the first movie, The Mechanic (reviewed here) and the fact that it’s not bound to being a remake from a specific source material, like that first one, is both this movie's strength and weakness. Weakness because the various characters seem a little less detailed and less intricately drawn in this one and, although the script does pay lip service to the Arthur Bishop character by having the lead still be a vinyl junkie, in a brief scene at the start (although the classical music is gone for this second outing), everything seems less ‘set up’ and less credible in terms of back story and that does kind of hurt it a little, I felt.

However, it is also this movie’s strength because, free from the constraints of any source, the film becomes much more explosive and fun in terms of the action and, although many people will possibly see this as a bad thing, it was kind of what I was expecting and what I was hoping for, to be honest. I like Jason Statham as an actor and, also, I believe he’s one of the few modern era performers who can safely be called a genuine movie star in the same way that greats like John Wayne, James Stewart or Cary Grant might be seen as that. True, the actors in question will bring their own fictional baggage with them to the films and Jason Statham is certainly no different in that respect... but it didn't hurt their careers much and neither, I suspect, does it do Statham any harm. So, for me, he joins modern, larger than life movie stars like Stallone, Schwarzenneger and Harrison Ford and, like them, he’s also a pretty darned good actor. So what I’m trying to say here is... without being a remake of something else, the film is free to be a typical Jason Statham action movie and, frankly, that’s just what I wanted to see.

The film starts off strong with a shorthand series of scenes showing us Arthur Bishop’s life direction after the end of the last movie before going into a wonderful and quite intense action sequence with nice little pieces of Mickey Spillane style brutalism, such as  pinning one antagonists hand with a dagger onto the back of another antagonist during a fight. Because of Statham’s experience in these kinds of roles, you believe he can do it and even his ludicrous, unplanned escape route takes on a layer of credibility as the writers and director pull off a stunt sequence that wouldn’t look out of place in a James Bond movie. It’s all good stuff.

Now, the plot is extremely simplistic, just like the first one, perhaps even more so. Statham is honey trapped into doing three impossible kills and to make them look like accidents, for someone in his past with a grudge against him. The second of these kills is extremely obvious but, like all in this movie, incredibly fun to watch and so I really don’t mind that the film is, in almost every way possible, predictable as hell. There are no surprises from the fate of Tommy Lee Jones character, the third on Bishop’s hit list, for example. In fact, the only surprising things about this movie is that a) Jessica Alba’s character didn’t turn out to be a little more complicated than she at first appears and b) the wonderful Michelle Yeoh doesn’t get in on the action stuff herself... which is a shame because I really like her when she does the action stuff. However, Yeoh brings the plausibility of someone a character like Bishop would trust with her to the proceedings because, heck, who’s not going to believe in someone like Michelle Yeoh. She’s a great actress and although she’s criminally underused here, she does bring a lot to the table in terms of getting certain messages across quickly, so a lot of character building stuff can be waived credibly. Jessica Alba is also great but, again, quite underused since she’s a pretty good actress too.

Now, the movie is directed by Dennis Gansel who, as far as I’m concerned, directed one of the few truly great vampire movies of the last ten years, We Are The Night, which I reviewed here. The film doesn’t look nearly as slick or decorative as that earlier film and he seems to have made a conscious decision to frame the shots and have them edited in a more ‘raw and edgy’ way. In fact, the film completely eschews those nice colour palettes and contrasts from scene to scene that were a deft touch on Simon West’s The Mechanic. So it would be true to say, therefore, that Mechanic Resurrection feels a little more Hollywood in its approach to the product but, honestly, for this kind of movie, that doesn’t hurt it either.

Mark Isham returns to score this sequel , which is less jazzy but equally cool with its emphasis on action music to match the on screen shenanigans of the lead character. I only hope the score gets a proper CD release from Lakeshore Records and doesn’t languish in electronic download hell for people who have the necessary virtual space and matching tin ears to be able to enjoy it compressed into such a package. After all, we got two different CD scores for the first movie so... I just hope this comes out in a proper physical medium sometime and, if it does, hopefully not just the kind of vinyl recording that the film's main protagonist would obsess over. As it is in the movie, though... great bit of scoring. I’ve always had a soft spot for Isham and he certainly provides a nice, action oriented soundtrack which is a succinct and appropriate match to the visual style of the film. Some nice work here.

So there you have it. A nice sequel to what was an okay remake. It’s certainly a film I’d watch more than the first and Statham and his costars certainly don’t let him down... including a slightly different kind of characterisation from Tommy Lee Jones than you may have seen him do before. I can see exactly why he took this part. Without giving too much away, I’m hoping that there will be a third ‘Mechanic’ movie before too long and, if they do go ahead with that, that it’ll have room for some of the characters invented for this second installment to return. If you like Jason Statham action movies then there’s no question you should go check this one out. Also, although it’s a sequel, there’s not too much reference made to the previous movie, so you can probably watch this as a stand alone without needing any info from the first one. Any blanks are quite easy to fill in and are all set up for this movie anyway... meaning that the back stories of every other character in this movie and their relationship to Arthur are not referencing the first one. So seriously give Mechanic: Resurrection a try if you like your stunts and action with a veneer of Stathamesque credibility. This one’s a good ‘un.
Posted by NUTS4R2 at 19:04