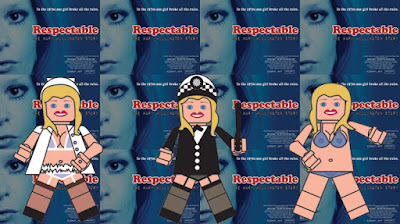 When I read on Twitter that Simon Sheridan, the writer responsible for the excellent book about Mary Maxted (aka Mary Millington), Come Play With Me - The Life And Films Of Mary Millington (reviewed by me here) had written, produced and directed a new documentary film about her, I was expecting something like a more seductive, pop culture approach to the lady’s life which would be a kind of abridged version of the book... but in no way a substitute for it. As it turns out, Respectable - The Mary Millington Story is both less and more informative than the tome in question. Which is a bit of a bonus, as far as I’m concerned.

The film starts off with the sound of film... proper film, none of that digital rubbish... running through a projector and, as you can hear the stock threading through on the soundtrack, the screen is dark and we hear the first of many recorded sound bites from Mary herself. We then get a quick rundown of the trajectory of her tragic life as a kind of précis of the film to come, in quick inserts from the various ‘talking head’ interviews which, as always in a film of this nature, fill up the majority of the running time. Which is what you would expect when the writer has obviously gone to the trouble of getting so many interviews with people who either knew her, encountered her or could bear expert witness due to their being in a similar profession (and it was really great seeing Linzi Drew again, to be honest). Anything else and the audience would feel somewhat short changed, to be sure.

Now, if you have read the aforementioned book on Mary’s shenanigans then you might feel that her early life story is somewhat glossed over here, perhaps. What you have to remember though is that you can’t throw all that detail in about a person from a book and expect the documentary, which is not that much shy of two hours anyway, to be either interesting or pacey. I think certain things are said which hit the key points and, if not all the facts and issues which may have gone into the lady’s psychological make up are highlighted here, they are emphasised enough that one can glean the main issues which led to certain behaviour later on in her life, perhaps. Either way, it doesn’t matter because anyone interested in reading more about the subject matter can purchase the aforementioned book and find out for themselves.

Another story new to me involved her, sometimes official, prostitution antics (for want of a better word), where it is alleged that Coleman’s Mustard once hired Mary to sleep with the head of Tesco so they could get their brand of product into the supermarket chain. Which is a bit of an eye opener, if this is true.

Other stories, like a more softened down version of her encounter with prime minister Harold Wilson are also present (if you want more details, buy the book) and her meteoric downfall involving the tax men, a corrupt police force (it would seem... who Mary paid protection money to but still managed to have them constantly raiding her sex shops), her increasing but completely unnecessary kleptomania and various other factors which culminated in her early suicide are all thrown into the mix. There’s also some things that don’t, necessarily, add up when it comes to taking a closer look at that suicide. It’s often noted that, in light of another brush with the law where they threatened her with a prison sentence, she retired to her room without her husband (who slept elsewhere in the house that night and who she was in the process of divorcing), wrote some goodbye notes and then ended her life by taking a large amount of pills washed down with vodka. And that’s indeed the story that the autopsy confirms. However, there is a big question mark in the involvement of certain other people, or a specific person, which is quite pointed in terms of the remembrances of some of the guests on this documentary and it’s interesting that several of them mention that Mary would never drink alcohol. Just being around the smell of beer made her feel sick. So... yeah... interesting stuff, I would say.

The way the film itself is shot and presented is very pacey and the whole thing never flags as the director balances the various interview footage of people such as members of Mary’s friend and family (which are heartbreaking in some cases), various lovers and major celebrities such as François Pascal and actor Dudley Sutton (who worked with her in the film The Playbirds - reviewed here) with excerpts from Mary’s films, recordings of Mary herself and the occasional bit of documentary footage of London in the 1970s... which I personally found most nostalgic since I was a child model at the time, working in my school holidays in various locations around London. Sheridan also adds the nice touch of coming back to new footage of the source of some of the on screen audio and visual excerpts... so he might precede an excerpt of a film with a shot of a projector showing it or go into a sound bite of Mary while showing a tape recorder playing the sample. He doesn’t do this a lot but he does it enough to make an impression and I kinda liked this way of handling it, all of which adds to an interesting watch.

Above all, from the various testimonials caught here, I got the impression that Mary Millington was much more about living a life of moral justice, far above the issues of the legality or illegality of what she was doing at any given time. So, for instance, she would stock illegal, ‘under the counter’ items in her sex shops because she believed it was the right thing to do and shouldn’t be against the law at all. There’s a lovely line from one of the interviewees in the film which, for me, summed up Mary’s brand of enlightened naivety very smartly. It's mentioned that she was a lady who carried "the spirit of the 1960s Summer of Love well into the seventies with her." I kinda like that idea and it’s maybe something we should all think about doing more of, methinks.

So there you have it. Respectable - The Mary Millington Story is a truly great little documentary that’s written, produced and directed by someone who has had an interest in Mary’s life for a very long time and can be considered something of an expert in this field, I suspect. In other words, a truly informative, sometimes thought provoking but always entertaining look at a tragic but very influential, in some ways, lady who also happened to be Great Britain’s first, bona fide porn star. The disc comes with the usual amount of interesting extras that are the normal expectation of an Odeon DVD release of one of Mary Millington’s films and this one gets a big recommendation from me. And if you do take a look at this movie and like it... then you can always go buy the book, too.
Posted by NUTS4R2 at 19:31