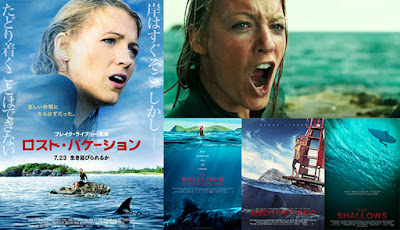 Fin And Bare It

The Shallows is a new movie about a great white shark and the carnage it wreaks in the shallow waters by a secret beach. As such, it’s bound to invite comparisons to Steven Spielberg’s great white shark opus, Jaws, and frankly, it’s a bit of a big movie to find yourself compared to. Not many movies are going to come out anywhere near as good as Jaws when you play the shark comparison game, including the Jaws’ sequels, and so The Shallows, as predicted, comes nowhere close to the level of that movie.

That being said, it has its own unique spin in that, apart from a few deaths, it is pretty much just a single woman, and a companionable seagull, fighting for life against the shark which has them trapped on a small island, just beyond a beach that hardly anybody knows about. There’s a lot which is good about the film and, it has to be said, a lot of that is to do with the central protagonist Nancy, and the strength of Blake Lively’s performance in this key role. However, I have to point out that it’s not a movie without a fair few problems, at least as I see them, and so I 'll quickly address those here.

The director uses a lot of 'in your face' close ups in this movie and it certainly does help to ratchet up the tension when Nancy finds herself in trouble. However, I don’t think the editing or coverage is all it should be here. Let me try and explain what I mean. There’s a shot early on when the camera is following Nancy fairly tightly... it’s not an extreme close up by any means but it’s certainly setting up the next to be an establishing shot of the beach that she has been driven to for the first five or ten minutes of the movie. Alas, although the next shot is, indeed, an establishing shot of the beach, it’s quite contrary to anything the audience is set up to be expecting... namely a POV shot from roughly where Nancy is standing. Instead, we get a sudden cut from a fairly slow, maybe even static shot of Nancy to a long, hurtling helicopter shot taking in the whole bay from a different direction. It kinda takes you by surprise and maybe that’s the point but, to be honest, I really don’t think it did the tone of the piece any favours in these early stages where you’re trying to con the audience into feeling comfortable within the space and try to get them to relate to the characters. So yeah, little artistic quirks like that can work quite well but here, I feel, it really didn’t.

Another thing in which I think Collet-Sera is maybe trying to push the boundaries of the regular syntax of the visual aspect of cinema too far is with constant shots inserted over the main canvass in order to convey personal information about the characters. For instance, as the movie starts, Nancy is being driven to the beach where she will eventually fight for survival and she’s flicking through her library of photos on her phone, pointing out certain things to the driver which, of course, are laying the foundations of certain sequences later in the film. Every time she flicks through a photo on screen, a third or so of the shot has an inset of what she is seeing on her phone, rotating through as she does this. Similarly, when she’s later skyping on the beach, the inserts of the ‘skype experience’ are inset, at some odd angles, into the picture. It’s very distracting. Especially when the shot cuts to a reverse and the inset is then just continued on a different part of the screen. I found it jarring and contrary to a naturally flowing movie experience, to be honest. As the film progresses, similar shots of Nancy’s watch are shown as inserts in to various parts of the screen. Now the director here is no Godard. He might well have been making a comment designed to pop you out of the movie so you can think about what you are seeing but, to be honest, it didn’t feel like that. It felt more like the director was trying to deliver information and, perhaps, the visual execution of this maybe didn’t work out so well. That’s how I felt about it anyway and, like I said, it's pretty distracting.

Another big problem is the amount of unbelievable, coincidental clichés found in this movie. Okay so... I guess if you’re going to be trapped on a very small piece of rock which is going to disappear under the tide at some point, you’d best make sure that your main protagonist is a trainee doctor so she can look after herself when she gets in trouble. And what are those unbelievably long earings she’s wearing? Who wears those? Could they, in fact, serve a dual survival purpose later on in the film by being that size and shape? Oh yeah... turns out it does come in mighty handily at some point in there so... yeah, all a bit too much of this kind of stuff, I thought.

There is, however, a great central performance in this film, as I said before, by Blake Lively. It’s a pretty intense performance and the actress manages to deliver something quite special here for what is, for most of the film, a one woman performance. Without giving too many spoilers away.... there’s a great scene where a guy on the beach can see that Nancy is trapped but he’s taking advantage of the situation rather than helping. However, when he goes to retrieve Nancy’s surf board from the ocean, he comes a cropper when the shark goes for him. Nancy does shout a warning to the guy as he swims out to her board but... and this is quite an obvious thing to happen at this fairly early stage of the movie... the guy is pretty much pulverised getting back to the beach. However, the camera does not actually show, at this point, what the shark is doing to the gentleman in question. Instead, it resorts to an old cinematic trick which is in no way necessary these days but which is, usually, much more effective. The camera instead decides to concentrate on all of Nancy’s reaction shots as she witnesses whatever our imaginations are believing to be happening and, I’m delighted to say, Lively plays this set of events with absolute believability, shock and nausea... for quite a while, it seems, until the camera deigns to show the gory punchline to the scene with the aftermath of the man in question. So, really, well done for her for being able to carry the weight of this film on her shoulders, despite the possibly deliberate but in no way less unsettling visual flourishes in which the director indulges.

The other star of this movie is the score by composer Marco Beltrami. Now I quite like a lot of Beltrami’s work anyway and although this eschews the classic, John Williams channels Korngold approach that the inevitable Jaws comparison may bring to mind, it’s not quite the modern, sound design meets atonality style of scoring you might expect the producers to plump for here. That being said, there is an ostinato used as a bass line in certain sequences near the end where Nancy and the shark are going head to head, so to speak, which is perhaps reminiscent of William’s famous two note motif for his great white shark score but, I honestly don’t know if that was a deliberate homage to the maestro or just my expectations of such making a connection with anything resembling a two note rhythm that was going to crop up here. Either way, it’s buried within the composition rather than being given its own voice as a dominating tone so, yeah, the music does its own thing and it’s pretty good and very supportive here. So top marks to Beltrami for doing something interesting, once again. Such a shame, then, that there seems to be no CD release for the score to this movie (nor any kind of release, it seems) as I would have liked to have heard this one away from the film it supports.

All in all, The Shallows is not a great film but it is fairly suspenseful and entertaining. Although a lot of the edge your seat thrills do involve the central protagonist pushing herself and doing things which the average human being night not be so stupid to even attempt (aka getting back in the water, while bleeding out and with a shark nearby), the ultimate result is that you may well be leaning forward in your seat at certain points (if you see it on a big enough screen) and holding your breath. Sure, it has its problems and I really wish the director had been less into the visual shenanigans with the various pieces of technology throughout the movie but it’s not a bad little piece if you want a ‘safe thrill’ from your cinema going experience. I wouldn’t go out of my way to either recommend it or warn against it... but if you find yourself circling the idea of the movie for long enough, maybe you might want to go in for a swim and take a bite.