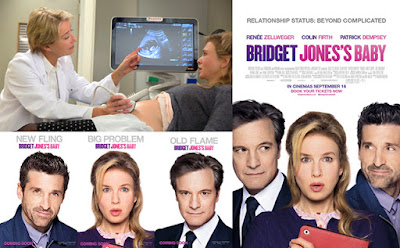 You know, I think it’s really irresponsible for a movie studio, after they were hopefully hauled over the coals for it when the first Bridget Jones movie came out, to continue to perpetrate the unbelievable crime against grammar/spelling/punctuation of the title of this movie that is seen on all the movie posters and tie-ins. It’s not a title I would reproduce here and I have removed the superfluous ‘S’ from the way it’s spelled so at least it doesn’t perpetuate the ignorance like a virus from this site... although I guess I’m forced to leave it on the pictures of the posters above (was tempted to just blur it out). I’ll stop going on now about this extremely important issue of mangling the English language and encouraging generations of students (and grown lecturers, believe it or not) to continue to spread this disease of no small concern but I won’t have it on my blog. Period (or full stop as it’s called over here).

I loved the first movie in this series, Bridget Jones’ Diary (see how easy it is to just ignore the bad punctuation?) but was fairly disappointed with the second. Also a little confused because my dim memory of that second one, Bridget Jones: The Edge Of Reason, is such that I thought she’d gotten together with Mark Darcy at the end and he’d proposed to her... or something similar. However, the story has obviously moved on quite a lot because, at the start of this one, Darcy is married and her other former lover, Daniel Cleaver, is lost and presumed dead (although I’m sure you can all guess how that one turns out).

Hugh Grant’s presence in this movie is confined to a few photos only but the incomparable Renée Zellweger and the always amazing Colin Firth are back to reprise their roles as Bridget and Darcy, for a third time. As are a lot of the wonderful supporting actors and actresses from the other two movies such as Gemma Jones, Jim Broadbent, Sally Philips, Shirley Henderson (somewhat wasted here as she’s a blindingly great talent) and James Callis (who was absolutely awesome as Baltar in the modern iteration of Battlestar Galactica and who is reprising his role here as Mr. One Hit Wonder of the pop scene). We also have a few new comers with Mark Darcy’s new rival Jack, played brilliantly by Patrick Dempsey (who I’m assured has a nice puppet) and Bridget’s news 'anchor woman' mate Miranda, played so entertainingly by Sarah Solemani, who I guess is at least partially responsible for getting Bridget into the dilemma she finds herself in for the remainder of the film.

Said dilemma lands in two parts when Bridget has six hours of passion with millionaire Jack by stumbling into the wrong tent at a music festival and then also, within the space of a few weeks, temporarily rekindles her passion with Mark Darcy. However, the condoms she is using are well past their use-by date and so, she finds herself pregnant and without any real clue as to who the father is. To make matters worse (aka funnier), she is half in love with both of them and, for a while, neither knows about the other... causing some awkward moments not just for her but for her doctor, played by the always watchable Emma Thompson, who also did double duty as a script doctor on this one too, I’m told.

So the big question in the movie on everybody’s lips is... who is the father of Bridget Jones’ Baby and... well you’ll be hanging on until the very last minute to find out. And if you want it clarified even a little further, you might want to stay for an easter egg in the form of a photograph which flashes up for a few seconds after the final end credits have played out.

Okay... so the film has its moments but, even with the same director as the first installment in the sequence on board, I have to say it’s no masterpiece. The first one was absolutely phenomenal but this one shares with the first sequel the feeling of a slightly missed opportunity and people just... well not milking the memory of the first one exactly but, maybe losing a few of the ingredients which made the original so special along the way. That being said, the adult edge to a lot of the humour is back in place and you can’t say the film isn’t gutsy in places. I personally didn’t find the movie all that funny this time around, it has to be said... but please don’t take me at my word on that one because I did observe that the audience were absolutely falling off their chairs with laughter during certain scenes so I think that, if anything, it’s definitely a crowd pleaser with, certainly, some of the most enthusiastic audience reaction I’ve seen all year.

Mind you, saying that, there were obviously some celebrity cameos in this movie made by people who I was obviously supposed to know and, I’m sorry but... I’d never heard of them. So I’m guessing a lot of the jokes just went over my head on this one. And, of course, even if you don’t find this one all that funny...  Renée Zellweger is such a perfect actress with impeccable comic timing that you can’t help but relate to the characters... especially when she’s supported by such a fantastic cast. I’ve always had a soft spot for Zellweger and, although this isn’t a film I was overly keen on, I did enjoy the presence and continuity she brought to the role here.

And that really is pretty much all I’ve got to say about Bridget Jones' Baby, I’m afraid. This is probably one of the shortest reviews I’ve written in a few years but there’s not much more I can add. Would I recommend the movie? Sure, Bridget Jones fans are bound to at least like it a little and, judging by the audience response, most of them will love it. I think it’s a tad of a stretch to hear people saying that this is the best of the three but, heck, I’m not entirely sure I'm a good judge of the subject matter in this case, to be honest. So I think I would just say that, if you didn't like either of the first two movies then I would err on the side of caution and not go. For everybody else I would say... it’s maybe worth a watch but don’t go in expecting the first movie or you will be disappointed.
Posted by NUTS4R2 at 18:42