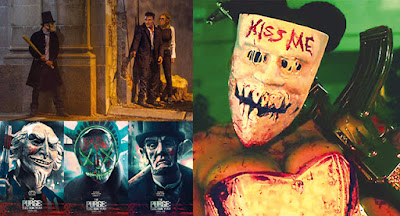 Purging On The Rocks

And so we reach James DeMonaco’s concluding (possibly) part of what is, at the moment, his Purge Trilogy. If you’ve been reading my reviews for a while you’ll know that, although I wasn’t completely taken with the first installment, The Purge (which I reviewed here), I liked it enough to try and defend it from some pretty stupid and critical comments at the time. I much preferred the sequel, The Purge: Anarchy (which I reviewed here) and likened it to being much more in the mould of the kinds of sci-fi films that Yul Brinner and Charlton Heston were making back in the late 1960s and early 1970s... a comment I’d already made about the original movie but which fit the sequel like a glove, even more so.

Part of the charm of that second one was the single minded quest of the anti-hero, played by Frank Grillo, who I’d only seen as a bad guy before in the Captain America films (he sets political events in motion as his recurring villain at the start of Captain America: Civil War too - reviewed here). His cynical and ultimately righteous approach to the annual purge, the night of permitted murder and crime in the future United States of America, hit home in all the right places and it was a perfect part for him.

Well, what we have with the third installment in the trilogy, The Purge: Election Year, is pretty much more of the same in regards to being a similarly styled entertainment to the second movie... it just has higher stakes that all the key protagonists and antagonists in the movie are playing and killing for. Frank Grillo is back as Leo Barnes and this time he’s now the personal security chief (bodyguard) for Senator Charlie Roan (played by Elizabeth Mitchell). Senator Roan has been on a mission since she was a teenager when her family were slaughtered in front of her in the annual purge and she is fighting for presidency to put a stop to the lunacy of this atrocity. Especially since, as was revealed in the last movie, it’s all about rich politicians making money off the backs of their voters anyway.

However, her political opponents, who are the ones profiting from the annual purges, are fixing the rules of the game, so to speak, to be able to take out the Senator and her opposing views... even going so far as to change the laws slightly so that the normally untouchable echelons of The Purge, such as the politicians, are no longer exempt from being victims in said evening of violence. So it’s up to Frank Grillo’s Leo to protect the senator as best he can. Unfortunately, even after he’s turned her personal home into an almost impregnable shelter, he doesn’t bank on traitors within the senator's organisation selling them out and it’s not very long before the Senator and Leo are on the streets and fleeing for their lives. Fortunately, they meet up with, as you know they’re going to, characters from a parallel story about a small grocery owner and his friends protecting the place from the people who want to get back at them for stopping their shoplifting. And so...

Yeah. It’s more of the same but it’s not completely a rerun and the plotting of the story, although predictable in its many twists and turns, is nicely done and they are leading towards a conclusion, one way or another, to the continued existence of the annual purge. And, no, I’m not going to tell you how that all works out here. Suffice it to say that the opposition to the Senator aren’t the only people using the cover of purge night to push a lethal, political agenda... whether the Senator wants them to or not.

The film is pretty much a fairly brutal actioner like the previous films but, for the most part, the main protagonists and antagonists are running around the city to try and achieve specific goals. Director DeMonaco keeps the spills and chills coming and he even manages to add the occasional world building tweak to continue to paint a very specific vision of a twisted future gone mad while, at the same time, not being all that far from the politics of many countries at the moment. What stuck with me in particular, is the idea of foreigners coming to America for purge night so they can take part as ‘murder tourists’. This is something which really boils down human nature in a quick little concept and it fits in with the cynical but frighteningly near the mark world view depicted in these movies.

Again we, the audience, are put in a position where we have to juggle the very strong anti-violence message which the film embraces, packaged up in just the exact kind of violence used as entertainment that is the very subject at the heart of its message. As an audience, we are being kept amused by a load of on screen violence and brutal action and the irony is, I hope, not lost on the majority of people watching these movies (or we’re all in serious trouble here folks). Personally, I have no problem with enjoying on screen violence as an exciting part of movie watching, as long as nobody carries it beyond the film and into their own personal reality. Since I personally believe that, as powerful as the medium of cinema is, most people who are inclined to resort to, or revel in, real life violence are always going to be set off by some catalyst or another (if it’s not one thing then its another... and I think there’s been a lot of evidence of this over the years), then I certainly support any anti-censorship campaign which continues to allow films like The Purge series to be made. Especially when they’re written with a certain amount of intelligence and are actually about ending the violence... whether they are having their bloody cake and eating it at the same time or not.

Once again, the score to the movie is quite interesting but since none of The Purge scores have ever been released on CD, only as a stupid electronic download, I haven’t had the opportunity to listen to them away from the film. Maybe some enterprising CD label will get onto these some day?

At the end of the day, if you liked the previous entries in this franchise, then you are not going to want to miss The Purge - Election Year. Although it’s not quite as compelling as the second, the moral heart of the film is still in the right place and there’s action aplenty in this one. Probably my second favourite of the three and, now that we have them as a trilogy, maybe it’s time to give these things another watch when the inevitable boxed set gets released. An entertaining and occasionally suspenseful time at the cinema.
Posted by NUTS4R2 at 12:19