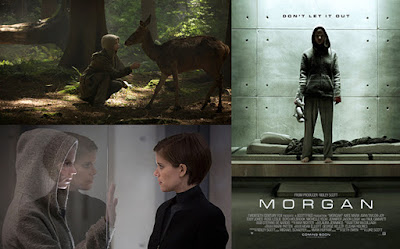 Typical. You wait ages for a movie to play at your cinema with Michelle Yeoh in it and then two come along within seven days of each other (see my review of Mechanic Resurrection here for the other).

Morgan is the feature length debut of Luke Scott, son of Ridley (and I promise I won’t mention that fact again... there’s a lot better things to be than someone living in the shadow of somebody else). After the totally chilling teaser trailer and the somewhat less scary full trailer for the movie, I was pretty much hooked on seeing this and went on its opening evening. I have to say that, although I do have some big criticisms of the movie, for the most part it’s a quite compelling, well oiled machine which would probably bear repeat viewing well.

The trailer makes the film look a science fiction tinged horror movie but... it’s not quite. There’s a lot of punch, chase, stunt work in the last third of the movie and so it’s more along the lines of a sci-fi fuelled action movie in some ways. The strength of it is... even though it’s “not quite a horror movie”, it’s kind of shot in the cinematic style of one. The director is pretty great in keeping to that methodology too and, although some of the editing seemed a little choppy in places, the shorter shots dovetail nicely into the longer ones, delivering an overall satisfying experience, at least in terms of story content and the visual and audio style in which it’s executed.

He also does some nice things with the design of the compositions in places, making full use of the widescreen aspect ratio to present characters on opposite sides of the screen, often leaving the middle of the shot bereft of movement and nicely forcing the collective eye of the audience to work at it and, thusly, propel themselves into the immersive experience a little better. That kind of tactic doesn’t always work for directors, to be honest, but it does in this movie and, at the very least, makes for some real eye candy in terms of the look of some of the scenes.

More compositional retinal soda pop comes from Scott’s decision to use surrogate visual planes to frame important parts of the action... such as putting the focus of a scene as something playing out on a screen somewhere or using reflections in panes of glass to enhance the look of the shot. Indeed, some of the work he does with reflective surfaces in the movie reminded me of some kind of enhanced “Ingmar Berman on acid” style of composition, in the way faces are superimposed either next to each other or directly over the top of one another... which in the case of certain shots I’m thinking of actually are a clue to something which you’ve probably already guessed but which isn’t finally spelled out until near the end of the movie. More on that ending in a few paragraph’s time.

Morgan also has a terrific cast and they are all working very well together. It’s very much, until the last third, an ensemble piece and hardly anyone gets more screen time than anyone else. Here you have the likes of Kate Mara, as company Risk Assessment trouble-shooter Lee Weathers, Anya Taylor-Joy  as the titular created superhuman... and other wonderful performers such as Toby Jones, Rose Leslie, Vinette Robinson, Jennifer Jason Leigh, Paul Giamatti, the aforementioned Michelle Yeoh, Boyd Holbrook, Chris Sullivan and even Brian Cox, among others, all playing corporate employees in one guise or another. And everyone is turning in amazing performances... especially Toby Jones, whose role may get a bit overlooked but who I believe gives one of his finest and understated performances as Dr. Simon Ziegler.

The film tells of Kate Mara’s Lee coming into a locked down facility where a home grown product, the now five year old Morgan of the title (although at five years old she already has the physical appearance of a late teen and a keen intelligence much greater than a lot of grown adults), has been confined to her quarters after an incident involving Jennifer Jason Leigh. In this incident, which is executed in a single, top down view and which comprises the pre-title sequence, Morgan is sullen and then, as seen in one of the trailers, suddenly compelled to leap into action and stab out one of Leigh’s eyes. Kate Mara’s character is there, seemingly, to see if the company product needs to be ‘terminated’ or if, in fact, Morgan is, indeed, a suitable case for treatment. Something which the company psychiatrist, played by Paul Giamatti, will be able to evaluate when he comes the day after Lee’s arrival at the facility.

As I said before, Scott pitches the movie to the audience couched in the trappings of horror/suspense films and he does it pretty well, ratcheting up the tension to the sequence where Giamatti arrives and interviews Morgan... something the well prepared audience will already guess goes horribly wrong from the indications in the trailer. From here on out, the film is a hunter/prey kind of movie and the action sequences come to the fore... there’s even a car chase at one point. The director keeps these action sequences playing out in the same visceral but low key visual style, though, which means that the change of pace in the last act doesn’t jar with anything you’ve seen before... which, again, is deftly handled.

However, one of the problems with the movie, and one that I alluded to earlier, is that one of the characters you are introduced to in the first few minutes is obviously holding some kind of secret and... it’s pretty obvious what that secret is liable to be. One of the other characters, more or less, partially calls it out early on in the film too and we really didn’t need that hint so early on. Also, the story seems to treat this minor revelation as some kind of ‘twist’ at the end of the movie when, in fact, you already know this half an hour into the procedings, if you’re paying attention. And with absolute certainty by the time the aftermath of a slightly grizzly impalement scene kind of proves a point. This, in itself, is kinda forgivable because, really, that’s one of the few places the script could logically go to anyway. However, the really big problem with this movie is the “post ending”, which seems tagged on as a “let’s bring Brian Cox in to re-explain it for the exceptionally slow people in the audience too” kind of conclusion. This ending is completely false and it doesn’t just insult the intelligence of the audience, it bludgeons their intelligence repeatedly over the head and then pokes it again with a sharp stick just to make sure it’s done. I was really offended at the way everything was recapped at the end and I think the film would have been a much stronger experience if the last five minutes was just scrapped and the film ended as one of the characters gets in a car and drives away. This really did put a dampener on a film that was, really, pretty great up until this point.

The other aspect of the movie which I found a little disappointing stems from my expectations raised by the trailer campaign. In the first teaser, the Morgan creature starts repeatedly humming a little fragment of melody and its really quite chilly and creepy. Somewhere in between that first trailer and the second, I’m guessing, where this was not heard again, the people behind the film must have decided to eliminate that creepy character quirk from the final product. Now, I can almost understand this as it maybe it’s too pointed about certain aspects of Morgan’s psychological profile but... I honestly think the trade off would have been worth it because that humming sent a real shiver down the spine.

Another thing that those trailers promised was a Morgan who “is still evolving” and, possibly by sheer editing alone, hints at an almost psychokinetic ability from the title character. Now, this idea seems to have been eliminated mostly from the final product too. Certainly there are still big trace elements of this character’s meta-human powers, such as the fact that the character can tell when she is being watched through a video camera or the revelation that she knows all about various people who are coming to visit her for the first time. However, I suspect there might have been a much different cut of the movie originally delivered and the character was somewhat toned down or reshaped in the final cut, at some point. Possibly when that terrible post-ending explanation scene was added into the mix. I’m not sure if this possibility of a more invincible version of Morgan would have been a good thing or not but... well I guess we’ll find out over the next few decades if there was, in actual fact, a different slant on the character... as stories get told about the production over the years, maybe.

As it happens, despite that awful ‘explanation ending’,  which nearly ruined the whole movie for me (note to studio heads... if you don’t spell it out for the audience, some of them might pay admission a second time so they can work it out for themselves and you get more profits), the film is actually a great piece of work and a startling full length feature debut from Luke Scott. Amazing performances aside, there’s a lot to recommend about Morgan and, even if it does have a kind of Ex Machina (reviewed here) meets Splice (reviewed here) vibe going for it, it’s also a better film than either of those and well worth a visit to the cinema with a possible Blu Ray pick up at a later date. I only hope Max Richter’s score for this thing gets a proper CD release at some point. He’s a great composer and seriously under-represented in soundtrack releases. Either way, though, give Morgan a go... it’s a nice little movie.
Posted by NUTS4R2 at 18:42