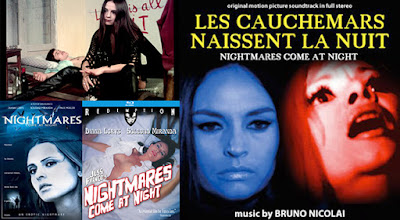 Well this is going to be a somewhat short and hard review to write, methinks. I always find Jess Franco a bit hit and miss although, I think I’ve been lucky in that the majority of the reviews of his movies found on here have been quite favourable. However, Nightmares Come At Night is a bit of a miss as far as I’m concerned.

The film stars Diana Lorys as Anna, a woman who used to work at a strip joint although, also, she might be a princess. She might also, as it happens, be losing her mind but it’s so hard to tell one thing from another in this movie, to be honest. The film also includes legendary Franco star Soledad Miranda... although the date of ‘release’ is a good two years after her tragic death (for more information on her, see my review of Vampyros Lesbos here). However, I should point out that Soledad really isn’t in it very much... I’d guess much less than ten minutes in total and there’s a reason for that which I’ll go into later.

Not a great deal on offer here in terms of fans of Franco’s work, to be honest. There’s not that many ‘still’ shots in the film and Franco often zooms in or out of a shot before panning around to follow the action, sometimes culminating in another zoom in or out. It’s colourful in places but the compositions are not as clever as some of the ones I’ve seen him use in other movies from this same period which were, obviously, shot much earlier, from when Soledad Miranda was alive (that comment should make more sense if you continue reading). There are some slight pleasures to be found in Franco’s eye for a pretty girl and the sheer amount of nudity on display, no doubt. There’s a long, very slow strip sequence with Diana Lorys which is so slow it’s almost static, something which is justified by some dialogue at the start of the sequence  but which, like a lot of the movie, doesn’t make a whole lot of sense.

Now, if I was being really kind I could call this Jess Franco’s stab at capturing the mystery, puzzle box nature of a movie like Resnais’ Last Year In Marienbad... only in colour and with a fair amount of nudity. Which is a description which would absolutely sell the movie to me but it lacks the clinical rigidity and continuity in the presentation which make Marienbad a masterpiece and this film... much less so. There’s the occasional interesting thing which crops up such as a conversation between Anna and her doctor in a car where all the close up reverse shots of her seem bleached out while the doctor is at full strength in terms of colour... but moments like these are few and far between. Indeed, I’m guessing that last thing I mentioned was a deliberate artistic choice because of the way the footage is edited together but I could easily be mistaken for thinking it is just the print which has gone wrong here because, frankly, for a Blu Ray presentation, it has to be said that the print on this is truly terrible to the point of being almost unwatchable in certain sequences. There’s a reason for this, though, as there is for the fact that the story, such as it is, is a real hodge podge of impenetrable nonsense and the answers to the questions raised in the viewing experience are cleared up, to a certain extent, in the excellent extras which are also included on this Zone A US Blu Ray disc.

As it turns out, this is not a single film, as such. It never had a real release and this is a patchwork job done by Franco to make sense of at least two unfinished projects which have been, I would say almost haphazardly, spliced together and presented as one piece. The footage was never actually released on this ‘lost’ film apart from a few screenings, from what I can make out, and it only exists as an ‘answer print’... which is the first test done with colours and sound synched. The producers of the Blu have obviously done their best with he material on offer and cleaned it up as well as they can while having to keep a lot of stuff on there because of not wanting to loose what detail there is. The various bits of footage were also in different aspect ratios so they’ve gone for the ratio they believe Franco would have presented this in if he had created a ‘release print’ from the material but that’s handy, as it happens, because the existence of some footage on an ‘ending’ shows that it must have been shot to make some kind of warped sense of the narrative (although the resulting talk of a hypnotised killer makes no sense either) and maybe explain why the footage with Diana Lorys doesn’t ever match up contextually with the fairly fleeting ‘spying neighbours’ footage of Soledad Miranda and her lover/partner in crime. So at least it’s possible to deduce for these, and a few other reasons, why we have this ‘lost’ or ‘ghost’ Franco movie in the shape it’s in.

All in all, though, I personally would have said that maybe this would have been best presented as an extra on another Franco package. It’s a real mish mash of a film and, as entertaining as it may sound, it really wasn’t remotely entertaining to this audience member. Bits of it are well shot and bits of it are less easy to decipher from the print. Nicolai’s score is good, as it always is, but doesn’t really help the picture out much, if truth be told. This is not the least favourite of the Jess Franco movies I’ve seen, and he’s a director who’s made some incredible, visually addictive movies... but it’s definitely down there in the lower depths of his work as far as I’m concerned so I can’t really recommend this one myself. If you’re a Francophile and a completeist, you’ll almost certainly want to check this one out. If not... I’d maybe proceed with caution.
Posted by NUTS4R2 at 12:38