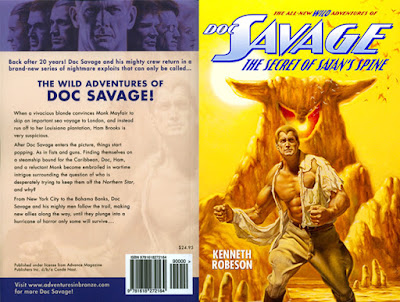 So once again we have the amazing Will Murray taking on the mantle of the old Street and Smith pen name, Kenneth Robeson, to continue the good work of Doc Savage, long after original scribe Lester Dent’s death. I think it says a lot about Murray’s enthusiasm and attention to detail that this tome feels exactly like it’s been written in the period of Dent’s work when this particular story is set.

The Secret of Satan’s Spine is a Doc Savage adventure which takes place in the 1940s, during the Second World War. The back story of Doc Savage and the Amazing Five was that they met while serving in the First World War, although the full story was never divulged until many decades later when Philip Jose Farmer wrote a Doc ‘origin story’, Escape From Loki. Doc and what was left of his crew only managed to survive another four years in literary form after the Second World War before the pulp magazine in which the novels resided was cancelled. Obviously, over the years, and this has much to do with the Bantam reprints, the Doc stories have found a new lease of life and so, here we are with another of Murray’s incredibly well cobbled together tales... taken from an original Lester Dent idea which was rejected by the publishers at the time.

Something dark and strange happened to Doc Savage in the 1940s. He became much less reliant on the scientific gadgets that were always, until that point, a large part of his literary personae. The fashions of the time had presumably made it more popular for ‘science detectives’ to solve their problems with their brains (and possibly fists) rather than reach for, in Doc Savage’s case, a whole arsenal of curiously ‘ahead of their time’ gadgets which were, more often than not, easy to conceal on one’s person. Another strange thing which happened was that Doc’s five famous aides slowly found their roles diminishing until, by a certain point, Doc was only ever accompanied by the two who were, presumably, the most popular with the readers... Monk and Ham.

Something else which I seem to remember happening, although my memory may be playing tricks on me here and I’m unable to confirm this at present, is that Doc’s Crime College, where he operated on their brains to remove captured criminal’s memories of their past before teaching them how to become upstanding citizens, either slowly disappeared or may have just been consciously dropped by Doc at some point. By then, I suspect, Dent had maybe realised that the decision to change someone into a less criminal person without any choice in the matter, and in total secret, was a bit of a moral blind spot and so it was dropped, or at least pushed into the background significantly, during this time. It’s an interesting dilemma which various post-Dent comics and stories have used as a dramatic springboard in later years but I think it’s probably something Dent realised himself at some point. It’s definitely something Anthony Burgess must have figured out when he explored a less subtle variant of the same dilemma in A Clockwork Orange.

Anyway, all these little changes to the character means that, for me, the stories written and set in the 1940s, while still good, are not usually among my absolute favourite Doc Savage adventures.

Will Murray addresses these points and the style of the 1940s Doc head on and, in doing so, makes him much more readable and more interesting than I remembered him from being during that period. He talks about Doc consciously leaving his gadgets at home in order to not rely on them so much but... at the same time... it’s also true that for large chunks of the book, Doc is wearing what is the 1940s ‘science magic’ equivalent of Harry Potter’s cloak of invisibility. So Murray kind of straddles a line between ‘to gadget or not to gadget’ and does it pretty convincingly, it has to be said, without really examining too closely why Doc would ever want to make life harder on himself and do such a thing in the first place.

The story starts off with Monk and Ham arguing, as usual, before Monk gets pulled into a scheme by being duped by a pretty face... a plot which will soon involve Doc and Ham too, as they take passage aboard a military ship to try and figure out just what kind of deadly commotion is about to erupt. However, that’s as far as it goes in terms of regulars of the series... it’s just Doc, Monk and Ham in this one and that would certainly fit in with the time period Murray has chosen to write about here. To counter that somewhat, he brings in a group of four friends who appeared together in one original Doc adventure by Dent and reunites them with what’s left of Doc and his crew... although they don’t do a whole lot over the course of the narrative, if truth be told.

As for that Crime College? Well, at one point near the end, Monk informs one of the captured criminals that he can look forward to a spell in Leavenworth, which is a far cry from Doc taking him back to a secret location and performing a special kind of acupuncture surgery on his brain. No explanation is given as to this passing comment by Monk and I’m guessing that people who are only aware of the 1930s Doc Savage adventures might raise and eyebrow over this line in the book. It does, I’m sure, make sense though.

The plot and pace in this one is not reminiscent of the globetrotting variety of adventures, even though a lot of the world, in terms of distance, is technically covered here. Unlike a lot of the Doc narratives, which can often be similar to a 1930s film serial in terms of people going here, there and everywhere, repeatedly, over a number of weeks... the structure of this one is fairly simple. We have a small part of the story at the start which is set in New York and a small part at the end on a small island which houses The Secret Of Satan’s Spine. Everything in between is set on the ship which has started its journey with a healthy number of disguised villains as well as the ultimate cure for all kinds of villainy everywhere... namely Doc, Monk and Ham.

The action isn’t choc-a-block and full-on in this one either, it has to be said. That doesn’t matter, though, because Murray has a way of grinding out his pulp prose in a fashion that moves the reader on at a fair lick without necessarily needing to constantly read about fist fights or other such matters... although there is still certainly enough action in here when called for... it’s just not one action set piece after another, which is not necessarily a bad thing and, especially I suspect, if you’re writing a specifically 1940s period Doc tale. Murray knows his stuff and he does his job well here.

I actually, despite the era of the Bronze Man’s adventures in which this fits, really enjoyed this one, after the initial set up was out of the way. The Secret Of Satan's Spine is a much better volume than Murray’s Doc book prior to this, The Sinister Shadow (reviewed here) and once I’d gotten over my disappointment at the 1940s setting, I really got into the swing of it. One slight criticism may be that the author seems less willing to spend time on a more believable pseudo-scientific explanation for some of the more fantastical things on display in this novel but I was happy to overlook this because of the sheer entertainment value that these inventions and archaeological artefacts bring to the story. Not nearly one of the best of Murray’s yarn spinners but certainly nowhere near the bottom end of the spectrum either. If you’re a Doc Savage fan then you should have no problem with this addition to your bronze library so... yeah... all in all, another big triumph for Will Murray writing as Kenneth Robeson. Looking forward to the next one.
Posted by NUTS4R2 at 19:30