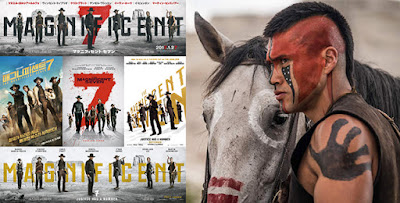 Okay... so Kurosawa’s Seven Samurai was one of the great masterpieces of cinema. No one, I think, would debate that (and retain any credibility, for sure). This film is kind of selling itself as a remake of the first of the more famous remakes of Kurosawa’s classic, The Magnificent Seven, directed by John Sturges in 1960. That film is also a bit of a classic, albeit a second hand one, and I know that a lot of the cast were so in love with Kuorsawa’s original that they were chomping at the bit to play the US equivalents of the original Seven Samurai, as far as some of them could be said to have counterparts in their remake.

People perhaps don’t remember that when the 1960 version of The Magnificent Seven was released in the US it immediately flopped but, did quite well in the United Kingdom and was therefore given another, much more phenomenally successful release in the US immediately following its UK success. At least, that’s the story I know (and it’s a very similar story with John Carpenter’s original Assault On Precinct 13, if memory serves me correctly). So yeah, that version became a perennial classic too and whatever you think of it in comparison to the far superior, original masterwork by Kurosawa, it’s still a lot more of a great movie than a much later remake, the Roger Corman produced Battle Beyond The Stars (which I have a bit of a soft spot for too, to be honest, and which is reviewed here). It also spawned three sequels... Return of the Seven, Guns of the Magnificent Seven and The Magnificent Seven Ride.

Now, the reason I mention all this is because I personally find remakes much more palatable if they’re reworked in a different milieu rather than do it in the same setting as one of the previous versions. So Kurosawa’s chanbara became a Western and then a Star Wars cash in space opera (I believe there was an Italian peplum version of the movie too). I think it speaks to Kurosawas ability to put together classic stories in that exactly the same thing happened to his chanbara Yojimbo when it was remade by, among others, Sergio Leone as a Western called A Fistful Of Dollars and again, starring Bruce Willis, in the 1930s depression era USA as Last Man Standing.

What surprises me about this new take on the original is that Antoine Fuqua and co have decided to remake the Western version of Kurosawas tale as... another Western. Ummm.... would rather had seen something else done with it but I guess, like the recent Ben Hur remake (which I reviewed here) I can’t be too vocal about reworking this kind of thing when some of the remakes are already classics in their own right.

Now, it has to be said that this new version of The Magnificent Seven isn’t really a remake at all. The characters have different names and, for the most part, don’t have too many counterparts from either the original Kurosawa version or the John Sturges version. Although, it has to be said that Chris Pratt is kind of playing a slightly less dashing version of Steve McQueen and Byung-hun Lee is kinda the greatests swordsman from the original, by way of James Coburn’s knife thrower in the first remake. However, all the character names are different and their relationships to each other are different too... although the Takashi Shimura/Yul Brinner role is obviously the one played by Denzel Washington here (although he doesn’t play it the same way) because he has an all black outfit and is the man who leads the others. Ethan Hawke’s character is a little closer in the spirit of the Sturges version because he has a back story relating to Denzel Washington’s character and he plays something like the Brad Dexter role in this one... except he also plays something like the Robert Vaughan role too so, you know, he’s essentially one of the few visible counterparts in the movie and it’s an amalgam of two of them.

The story is the same in spirit but... different too. This time, the villagers live in a small town and the threat to them comes not from Mexican Bandits but from fellow Americans who have taken over their town via the local gold mine. So I guess you can say the film takes certain elements from both Seven Samurai and The Magnificent Seven but does its own thing with them. It’s more a classic Western than it is a remake but, that being said, there are a fair few homages to the originals. I’ll get to the music in a minute but there are a few lines and paraphrases from the Sturges version such as Denzel Washington’s take on Yul Brinner's “I’ve never been offered everything before” (or words to that effect, itself an homage in tone to Takashi Shimura’s “I understand” when he realises the true cost of the farmers’ sacrifice in Seven Samurai). Actually, about the money the Seven are offered here... we are lead to believe it is pooled together by the locals in town but when the Seven arrive, it’s pretty obvious that the two people who hire Denzel and his crew have done so without the knowledge of the townsfolk. So there’s a bit of a weird... “How did they raise the money?” moment I had in the movie just about there. Now as it happens, and this demonstrates the way in which the basic characters have mutated into something completely different for this version, Denzel Washington’s Chisolm character has his own motivations for taking on the job (which you’ll find out right near the end) but as for the others... hmm. Maybe a bit of a story logic shortfall there, I reckon.

Another thing this movie has in common with the Sturges version is Steve McQueen’s joke about the guy who jumped out of the window of a tall building. Chris Pratt tells this joke in this version (although I wasn’t too sure about his delivery of this the first time, to be honest) and then the writers have a field day with it and it becomes sort of a running gag in this movie... which is a nice idea but, ultimately, felt overused and therefore undervalued because, you will hear it five or six times throughout the feature and it certainly wears out its welcome at some points.

The final battle is pretty entertaining though. Don’t get me wrong, it’s not got the sheer spectacle and excitement of Kurosawa’s epic ‘rain and mud’ finale but it is pretty much a more engaging and tense shootout than the 1960 John Sturges version... which is something I didn’t expect to be typing. So there’s that.

The tone of the movie is strange, though. Instead of being a classic American Western like the Sturges, we have a movie which takes elements from that legacy but also from the American Revisionist Westerns and, very much, the Italian Spaghetti Westerns too, it seems to me. It’s a very postmodernistic, eclectic version of a Western and although the visuals mostly manage to make this mish mash of Western styles work, it’s the musical juxtapositions which manage to help glue it altogether.

This was James Horner’s last score. That is to say... he’d written some of it from his visits to the set and it was delivered to the director after his death. The rest of the score is by a guy named Simon Franglen but, unless the two composers were both writing in completely different styles (which there seems to be in the movie) then it’s kind of hard to tell where one composer is taking the reigns as opposed to another. And it’s a diverse mix with the emphasis on 1970s revisionist style scoring, classic Americana (I’ll talk about that in a minute) and Spaghetti Western writing... especially the tense underscoring you get to the preamble to some of the gunfights in this. That being said, Horner’s danger motif is front and centre a few times in the movie and, yeah, if you know Horner (or even Prokofiev, for that matter) then it will probably pop you straight out of the action.

One thing which one or another, or possibly both, do in a couple of sequences (but my best guess is it’s Franglen in this case) is suddenly revert back to the Coplandesque style of Americana Western scoring that Elmer Bernstein used, to a certain extent, in the 1960 version. Now, Bernstein's classic score is not actually used in this movie at all other than a somewhat weaker orchestrated version at the end credits... which actually seem to play out visually more like the opening credits to Sergio Sollima’s iconic Western The Big Gundown (aka La Resa Dei Conti reviewed here) than a classic American Western, it has to be said. Bernsteins scoring isn’t used anywhere else in the movie apart from, at a couple of times, a very slight use of a simplified, four note version of one of the melody fragments, repeated here as a background rhythm. It’s actually far subtler than it possibly should be on a big, broad Western calling itself The Magnificent Seven, so I don’t know if that was an intentional reference or not... but mostly the composers don’t take their cue, so to speak, from the memorable Bernstein classic which is probably even more famous than the film it was written for (and reused in the sequels).

And I don’t have much more to say about this one, it seems. The cast are fantastic, especially Vincent D'Onofrio’s turn as Jack Horne but, mostly, the Seven don’t seem quite as charming as the 1960s lot, nor indeed their 1954 counterparts in Kurosawa’s amazing Seven Samurai. They are, however, more politically correct in their genetic make up, it seems to me. You have a dark skinned actor leading a group of men who include a Mexican, an Asian and a Comanche Indian in their number. Which is absolutely great, of course, and makes for an interesting movie but, at the same time, I have to ask myself the question... would you get that kind of ethnic mix working side by side in the Old West? I don’t know the answer to that, actually, because I’m not very well versed on history, especially American history, but I do wonder if it’s a valid criticism or not as to whether this kind of mix of stereotypes would have made a happy, effective team in the late 19th Century.

At the end of the day, however, I’d have to say that this version of The Magnificent Seven (if you want to think of it like that) is brilliantly played, well shot and is blisteringly entertaining. If you like Westerns and are not too worried about how it matches up to any of the previous versions, then you’re in for a treat because this is a pretty good one. An exciting time at the cinema and perhaps one to round up your friends for. I could easily see there being a sequel to this at some point although, like I said earlier, the ending is slightly different than you might be expecting if you go strictly for the ‘counterparts’ game in terms of surviving characters. A fun film though and one I might even watch again some day... so that can’t be bad.
Posted by NUTS4R2 at 20:00