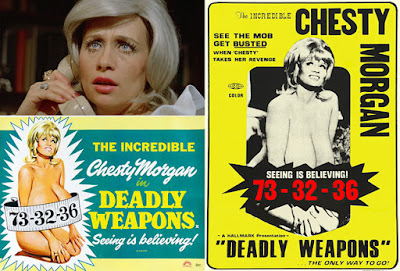 Warning: A couple of big spoilers in here, I guess, if you’re really that fussed about such things in movies of this nature.

Okay... I’ve been hearing about Chesty Morgan movies for a while now so I grabbed the new US three movie Blu Ray set called Chesty Morgan’s Bosom Buddies, which includes her two most well known films, Deadly Weapons and Double Agent 73, as well as The Immoral Three. That last movie doesn’t appear to actually have Chesty Morgan in it for some reason so... what we really have here is a collection of films directed by Dorish Wishman.

Doris Wishman was born in 1912 but she didn’t start directing until after the death of her first husband in 1960. She occasionally used a male pseudonym for some of her films, most of which were some kind of exploitation fare like the nudist movie Nude On The Moon. She was fairly prolific in the 1960s and 1970s and directed her last, 30th movie, in 2007... or at least that’s when it was released because, according to the IMDB, she died in 2002.

I’d like to say that Wishman’s films were well directed movies featuring strong, anti-establishment women righting wrongs and fighting the sexist clichés propagated by her male counterparts but, truth be told, as I started watching Deadly Weapons I was quite startled to find that the movie was, in fact, a) not really any of those things and b) quite terrible. And it’s not necessarily terrible in that good way, where one can appreciate, with a smiling eye, the absolute irony of a film like this being in existence... although there is a degree of that in this too, to be fair. Mostly, though, it’s just incredibly badly put together and, also... a bit grubby to boot. And I’m not talking about the quality of the Blu Ray transfer here either... Something Weird Video have done a bang up job on the presentation of this release.

The film’s opening credits begin with a cheesy song which temporarily cuts out when Chesty’s famous assets are thrust full on into the camera, accompanied by a clap of thunder. The singing then continues with scenes of Chesty dancing in the reflection of some kind of fish eyed mirror as she plays with her deadly weapons. And, no, that’s not a terribly sexist pun... well alright, it is but, what I meant to say was... that’s not just a terribly sexist pun. Chesty’s deadly weapons are just that, as you come to see in the second half of the movie. I think the opening sequence is really not bad... until you are forced to watch it again in the context of the main movie later, where the artistic nature of the angles etc don’t really work without the context of it actually being in a credits sequence.

One thing I will say about the movie so far is that the music just keeps getting funkier and cooler. I’d love to know what it is but I don’t think that’s something I’m going to find out in a hurry anytime soon. There is no music credit for this thing so its obviously needle drop and comes from a professional soundtrack library. Either that or they just plain stole it from another movie but I would expect the former rather than the latter here... it’s not a 1970s Hong Kong or Turkish movie, after all.

The plot thickens as Larry is trying to blackmail someone with the ‘stick’ being the thing he’s only pretending he hasn’t attained from the first guy yet, instead of leaving that task to his mysterious boss who’s identity you might not take all that long to guess, methinks.

Things go pear shaped when Larry stabs the guy they were trying to get the item from... presumably to cover his tracks. Then, the boss of the gang somehow finds out that Larry has been running a blackmail scheme of his own so he sends Harry Reems and another accomplice round to kill Larry. They do so while he’s on the phone to his girlfriend Chesty, who slowly processes the news in some of the most spectacularly bad acting I’ve seen. She also listens in on the two killers talking and gets some leads on where to look to find them to exact her chesty revenge.

Everything in this movie is totally unconvincing, it has to be said. The acting, the stilted dialogue, the terrible fight choreography... even Harry Reems unbelievable 1970s bushy moustache which, ironically, though it doesn’t look that real, probably is.

Meanwhile, Chesty flies to one city where the first killer, known as Captain Hook because he wears an eye patch (I never said this movie made total sense, okay?), is laying low. She knows he frequents the burlesque houses and so she gets a job as a burlesque dancer. Something she apparently was in real life. At first, the boss doesn’t even see her as he’s reading a newspaper while he rejects here... so she gets her bosoms out and he changes his mind in a hurry.

After a while, and after being fired for not giving in to the whims of her gropey new manager, Chesty finds Captain Hook and gets herself invited up to his room for sex... and this is where the title of the movie really comes into play. She gets the information out of Hook as to where to find Reems and then laces the guy's drink with a pill which partially paralyses him... making his arms go all floppy and useless. She then strips her top off and unleashes her deadly weapons, slowly smothering the man to death with the weight and density of her huge mammaries.

And then it’s onto the next fellow as she hops on another plane and tracks down Harry Reems, who really doesn’t want anything to do with her as she tries to flirt with him. Eventually, though, he’s forced to strangle his girlfriend to death and, with nobody left to have sex with that evening, he and Chesty hook up for, pretty much, a rerun of the previous death scene with Captain Hook. Harry might like to keep abreast of the situation but this time it leaves him dead.

And that’s almost it for Chesty and her revenge on her boyfriend’s killers except, on returning to her city, she tells her father that Larry left something in a drawer which was very important. Big mistake because, as she is sleeping off the day’s killings, she hears a noise in the night and finds her father trying to locate Larry’s blackmail material. It turns out, if you really didn’t see this coming, that Chesty’s dad is actually the boss behind the gang Larry was in after all. When Chesty doesn’t come clean about the stash, he gets his revolver out and shoots her between her deadly weapons. Chesty retaliates with some shooting of her own, killing her father before she performs a very long, drawn out but so painful to watch, because the acting really is atrocious here, slow crawl across the room so she can die with her head resting on her father.

The movie finishes there and there’s not much else I can say about this one. Deadly Weapons is not the film I was hoping it would be and I find it strange that these titles in particular have grown a fanbase over the years. I can’t, in all honesty, recommend this to many people. It has its moments but they definitely are few and far between and I really didn’t think they were worth the price of admission on this one. That being said, I’m still looking forward to seeing Double Agent 73 soon so... you know... watch this space for another Chesty Morgan review sometime next year, methinks.
Posted by NUTS4R2 at 18:59