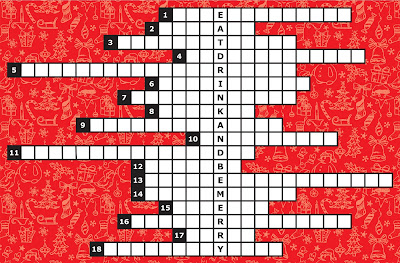 So here we are again.

Time for another Cryptic Movie Quiz for the Christmas period.

If you look at the grid above you’ll see spaces for 18 movie titles running horizontally and below are the cryptic clues to help you work out what these non-Christmas movie titles are (I'm sorry if it looks a bit blurry but the new Photoshop is absolute rubbish). To help you out, I’ve filled in a line of letters downwards spelling out EAT, DRINK AND BE MERRY... so you have a letter in its correct position for each of the titles. Click on the grid to see a larger version of it.

Once again... and depending on my finances after Christmas... I’ll probably award a small, strange or possibly customised prize (if I know you from Twitter) to the person with the most correct answers.

Email your answers to me at nuts4r2@hotmail.com and you have until the end of New Year’s Day (January 1st 2016) to get your entries in. A few days after that, I’ll stick up the name of the winner (or winners, if it’s a tie), along with all the answers, here on my blog.

By way of an example, here’s a question from last year’s quiz, followed by the answer.

Example question:
One thousand quid for rooms to rent for that annoying, enlightened soul. 21 letters.

Example answer:
One thousand pounds is also known as "a grand" in the UK. An enlightened soul could be Buddha but, if he's annoying, then he could be a bit of a Pest. If he's renting a room then it could well be in a hotel. Hence we have The Grand Budapest Hotel.

If you keep checking back at the comments section, I may put the odd clue on every now and again to help you out.

Full marks are rarely scored so if you’re feeling a bit stuck, there’s still everything to play for. Send me what you've got anyway.

Hope you enjoy playing and, above all, have fun.

5. Whether it’s this Linda or that Linda, it should make an interesting activity. (20 letters)

6. A couple of bonfire night dummies from a city in France. (11 letters)

7. None scrambled at the demonstration of the fourteenth letter of the alphabet. (12 letters)

9. An unhappy and confused oak is speaking in poetry. A spiritual entity is proceeding positively but in reverse. (14 letters)

10. Rearrange the angle slightly and reshuffle the end of the earth. (10 letters)

11. That young lady stuck between Sunday and Tuesday. (17 letters)

13. Get in a couple of big fights just above the thigh. You can put this example of typographic spacing in a container if you are family. (18 letters)

16. A single stalk of wheat gets very angry while wearing a couple of French hats. (16 letters)

17. Great French fiction writer finds himself in a muddle. (5 letters)