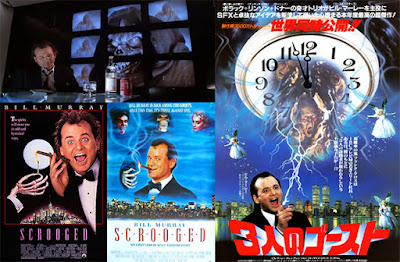 It’s funny... these days I think of Bill Murray as one of the most solid, reliable actors working in Hollywood with a incredible output of quality movies to his name over the last decade or more of his career... including such amazing performances in films like Groundhog Day, Lost In Translation, Broken Flowers, The Life Aquatic with Steve Zissou, The Monuments Men... to name but a few. However, back in the late 1970s to mid 1980s, I really didn’t think a lot of him at all, to be honest. I’d  seen him in stuff like Stripes and Caddyshack and, really, I just couldn’t get the hang of him.

Even the one big film to my taste that he was in at the time, which I did kinda half enjoy, the original Ghostbusters (the first pop song I’d ever bought because I was always more interested in movie scores than songs), didn’t elevate him much in my eyes. It was an okay film... Murray was okay in it and I really had no idea that one day he would, in my humble opinion, come into his own and quietly become one of the most interesting acting talents in Hollywoodland.

My first inkling that Murray really had more going for him was when I first saw Scrooged. I can’t imagine trekking out to my cinema to see this at the time but I might have done because I seem to remember my cousin recommending it to me at one point. Either way, this is probably the movie where I began to realise that Murray’s understated acting style was, in fact, an indication of a talent I hadn’t realised that was there so, even though I understand that he really didn’t get on with the director on this movie... I think this is the one where he starts to quietly shine in the background.

I guess we can blame Charles Dickens for the raw cynicism of his source novel, A Christmas Carol, to give a direction for TV programming executive Frank Cross, Bill Murray’s version of Scrooge, in this modern update. Murry starts off as a villain and goes through the ghosts, as in the original story, until he reaches his final destination of redeemed believer in the spirit of Christmas. And, it’s not a bad film. I liked it better back in the 1980s/90s, I think and, it’s definitely a film which is very much a time capsule of the era it was made in, in that it does seem a little less than timeless. But it has a certain charm and Donner is a pretty good director and, with the help of Murray, he does some nice, off kilter stuff in this...

... starting with a very strong opening, highlighting some wacky and cynical Christmas programmes which set the mood up straight away as to how Frank Cross approaches the commercial aspects of the season. The strongest of these is a hilarious gun battle/siege at the North Pole where Santa and the elves are arming themselves against a furious attack when Lee Majors comes to the rescue in ‘The Night The Reindeer Died’. Murray and the writers further illustrate the cynicism of the main character by having him fire one of his employees without any kind of remorse as to how that will affect the life of the person in question and also chucking out some great, dark throwaway lines. For instance, when one of the prop guys tells him he can’t fix tiny reindeer antlers to a mouse with glue, Murray asks him if he’s tried staples.

All this is a great set up as a contrast to the inevitable, moving scenes where Cross is taken by the ghosts of Christmas past, present and future to see various aspects of his life... um... past, present and future and also, of course, to revisit the romance of the woman he let get away from him due to his unremitting selfishness and cynicism. Who in this case is a character called Claire, played by the truly wonderful Karen Allen. You know, I’ve always liked this actress but I’ve seen her in hardly anything else other than the obvious two Indiana Jones movies and it’s always a pleasure to watch her work. She is sadly underused in this movie in terms of screen time but what she does here is absolutely heart melting and if anyone can make you believe that their character is still somehow in love with what Frank Cross/Scrooge has become, it’s her.

Asides from a vast array of small roles by faces you wouldnt expect to see in a movie like this, such as John Houseman, Buddy Hackett, Michael J. Pollard and Robert Mitchum, there are also a number of quite interesting set pieces thrown into the mix. The most interesting of these is the appearance and gravitas of the grim reaper-like ghost of Christmas yet to come. Donner nicely sets up the appearance by having a fake grim reaper in a lift who Cross reacts to as though he is the real thing. A little later, a giant skeletal hand reaches through a bank of TV screens and we see the true spirit, so to speak. It’s not a cutesy sight like the ‘devilish cabbie of Christmas past’ or the ‘violent Christmas tree fairy of Christmas present’. Instead, we have a truly nightmarish, giant manifestation who has haunted and lost souls in his stomach, when Murray’s character takes a peek, and a face beneath the traditional hood that is a silent TV screen. It’s truly sinister and, I think, something which the film really needs at this point in the proceedings to sell the concept that Murray’s character will experience something which will finally send him over the edge and back into being a respectable human being again.

That being said, if there’s one weakness with the film it’s the last ten minutes or so, where Murray’s character has such a sea change and gives a long speech on national television that one wonders just why his boss, Robert Mitcham, doesn’t just fire him on the spot. I don’t know why this ending just grates against me so much now, especially since it’s pretty much on a par for the original... but it just feels a bit of a cop out compared to the build up at this point. That being said, the film is generally quite moving and, at more than one point in this first rewatch in over a couple of decades, I was getting to be quite a blubbery mess from scene to scene. So despite my trifling caveats, the film does still pack a lot of power for me, which doesn’t surprise me, to be honest, since I’m a real sucker for the sweet sentiments of Christmas. Much more so than when I was a kid, that’s for sure.

And, of course, the icing on the cake is Danny Elfman’s score which I’ve already mentioned (along with a possible inspiration/similarity to Ronald Stein’s score for Roger Corman’s The Haunted Palace) in my Best Christmas Music article, which can be found here. There’s some typically Elfman Christmassy jingling going on here and it’s also, obviously, a nice stand alone listen away from the movie... although I did feel that some of the music in certain scenes was possibly a bit inappropriate and was overtly Mickey Mousing the action unnecessarily at times. Even so, a great score by Elfman which is just more evidence of him being one of the modern masters of the art of soundtrack composition. He definitely hits a lot of right notes here.

So there you have it. My take on Scrooged is that, while ultimately very dated and a bit hit and miss when it comes to the laughs (and there are a lot of references here to those previous Bill Murray movies which I didn’t particularly like), it deserves its place as one of the more repeated and pleasurable movie gems which lives up to a good rewatch every few Christmases. If you’re in the mood for a seasonal, sentimental journey and you are a fan of Bill Murray’s deadpan delivery then you could do a lot worse than sticking this one on the Christmas TV rotation. It’s not a bad film and possibly needs to be more on everyone’s radar than it perhaps is, at the moment.
Posted by NUTS4R2 at 20:31