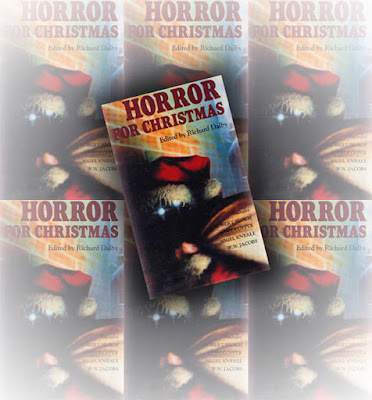 After last year’s novelty of reading a book set at Christmas during the merry month of December, when I purchased the much talked about reissue of Mystery In White (reviewed by me here) I decided to make this something of a tradition on this blog from now on so, if at all possible, I’ll be reading and reviewing something seasonal around this time every year.

Now, I almost went for another Christmas mystery book but then I remembered it’s somewhat traditional to be told ghost stories around this time... at least in the UK... so I decided to have a look for something in the horror genre this time around. Maybe I’ll try another yuletide whodunnit next year.

This Richard Dalby edited tome, Horror For Christmas, was what I ultimately decided upon after trawling amazon for a quarter of an hour or so. Partially because a compendium of short stories written by a variety of authors was almost certain to have at least one story I liked but, mostly, because a nice hardback copy on amazon costs only one penny at time of writing this. It even, if you make up the price and order it with any other required items, qualifies for free super saver delivery so... yeah, got this one totally for a penny and, since it’s such a hit and miss affair, I’m kind of glad I paid no more for it, to be honest.

There are many great names with a short story credited to them in the book... some of whom I’ve heard of and many of whom I’ve not. The absolute decider for making the purchase for me, other than the modest asking price, was the inclusion of a short tale by Nigel Kneale, the creator of Professor Quatermass, no less. However, as it happens, it turns out that, of the ‘hit and miss’ stories found here, Kneale’s story definitely ventured into the ‘miss due to being vaguely incomprehensible’ category, as far as I was concerned. It's the shortest thing in here at only a few pages long and I even resorted to a Google search after, to find out if I was missing anything about what the story was about. Not that I ever found an answer to that question.

Now, I must confess to having a bit of a mental block when it comes to the specific short form of ghost story fiction. Don’t get me wrong, I love a good ghost story and wonderful novels such as Shirley Jackson’s The Haunting Of Hill House are not pieces of prose to be trifled with. However, when it comes to spectral short stories, I always seem to read things which are almost all very similar and with more or less the same few duplicate endings... presumably because there’s only so much you can do with a ghost story in such a short form. These things are almost always completely predictable and usually for me, as a result of this, somewhat frustrating and disappointing. That being said, not all the stories in here are spirit manifestation stories and, asides from the looseness of the term ‘horror’, which I don’t think should be applied some of the stories in here (human monsters are not monsters people... these are just thrillers), there a few little gems to be found near the back of the book  and even some of the ghosty ones are quite good... but just not very many of them, it has to be said.

I found the first half of the book to be mostly very dull, to be quite honest and, even the most interestingly constructed one of the early tales in here, the Switzerland set The Sinister Inn by F. S. Smythe, is devoid of an actual spooky monster with which to clearly label this tale an exercise in horror. For the most part, though, the majority of the stories are absolutely as predictable as I expect a short ghost or horror story to be and it’s only my single bloody mindedness about not giving up on something I’ve started that kept me from flinging the thing aside and looking for something else to fulfill my Christmas book review. However, the book really and, quite unexpectedly, starts to come into it’s own with the last five stories, one of which is a very long one and these last tales are actually something worth reading.

The good stuff starts with Ronald Chetwyn Hayes ‘strange fiction’ style tale Christmas Eve, which basically tells of a man who is recruited by a young lady into perpetrating what amounts to an extremely gory act on a live ‘victim’. However, not all is as it seems and it leaves both the main character and the reader with a question mark over the head as to what the story was really about and what the consequences are for this character in the future.

After that we go into a story called The Night Before Christmas by Psycho author Robert Bloch, which is one of those tales which really isn’t, in any way, shape or form, an example of the horror genre but which, at the same time, wouldn’t have looked out of place in comic strip form in an old 1950s EC comic such as Tales From The Crypt or The Vault of Horror. This tells the story of a desperate artist who gets a king sized commission but who gets, against his better judgement, too close to the subject of his painting. Lets just say that Bloch manages to give us a savagely gory conclusion (this would really suffer under the knives of the censors if it was ever filmed) which is also merely conjured up in a single last line which is a real killer of a pun. Bloch wraps his violence up in humour so... you have been warned.

Next up we get The Great Arcana by Ron Weighell which is a proper supernatural tale and tells of moving statues and portals out of hell. It isn’t too far away from being an H. P. Lovecraft Cthulhu sketch in some ways... but as if it were being retold by someone like M. R. James. It’s exactly the kind of story that the Italians would have made a commercially successful horror film of in the mid 1980s... and for all I know, they probably did possibly borrow from this at one time or another.

Wish You Were Here by Basil Cooper is the longest (and best) story in the book, almost a novella, and it’s very much a traditional ghost story. It’s also set quite local to where I work, in a village called Hoddesdon. Now the thing about this one is... yes, it is an obvious, much telegraphed ending... just like the other ghost stories in here but, because the writer spends a lot of time building up the characters in this and stoking the fires of suspense, I found I really quite warmed to this tale of a successful writer being haunted by old postcards and... something else.

The last story in the book is To Dance by the Light of the Moon by Steven Gallagher, who I knew from reading his novelisation of Saturn 3 (the movie is reviewed by me here) when I was in my teens. Now this tale of a newsreader of a small, independent radio station is not nearly as good as the four stories which come before it and, it’s up to interpretation as to whether the story delves in to the realm of the supernatural or not (I think it probably does but there is an alternate solution to the tale's grim ending note, I suspect). It is, however, refreshingly different from a lot of the fodder in the early part of the book and after the front loaded disappointment of the earlier section, it continued to be an entertaining read... even after the four, really quite interesting, previous excursions into horror tinged mayhem.

So there you have it. My verdict is in. I’m not sure I’d be totally at ease with recommending this tome to many people, in all honesty and, though I really enjoyed the second half, I think you’d have to be quite up for giving up time on more frivolous pursuits if you want to wade into this one. I certainly don’t regret buying this one... especially for a penny... but I think next year I might look around for either another Christmas mystery story or try yet another genre. And if you have any suggestions for future Christmassy reads, please leave it in the comments section below and I’ll see if I fancy it.
Posted by NUTS4R2 at 12:21