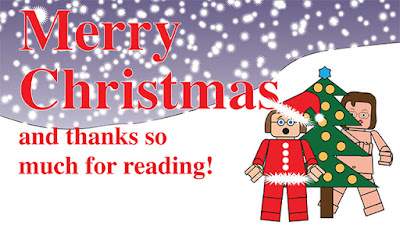 Well it’s that time of year when I get to thank you all for reading and to wish you a Merry Christmas.

It’s actually been a pretty good year for me on many fronts... my personal life is something I’m much happier with and, for the first time in a few decades, work has been pretty good for the last few months too. So I have a lot to be thankful for this year.

This is the bit where I tell you what the future has in store for NUTS4R2 and, it has to be said, I always get it completely wrong.

Well I can, at least, safely predict the very near future on this blog. In a day or two my review of the new Doctor Who Christmas Special should be published here... unless something absolutely awful happens to me when I should be watching it. This has been a full year without the regular programme on air but there will be a new series starting next year (sometime in April is my best guess) and we have had the spin off sister show, Class, to keep us going (yeah, there will be a review of the first, hopefully not the last, series of that going up soon).

I also have to get the inevitable Best Movies of 2016 list up there soonest. Just got one more to watch and one other to rewatch before that list is fully finalised but I hope to have it up by New Years Eve. As usual, my Best Soundtracks end of year list will not happen until the second week or so of January... I have to wait until after my birthday before I can draw a conclusive picture of those as stand alone listens.

As for the rest of the year on this blog... well, I shall try and predict it but I usually get it wrong...

Hoping to get a lot of franchises one here... so some more Zatoichi movies, some more Sleepy Eyes of Death movies, finishing off The Saint movies, finishing off the Charlie Chan movies, a possible rewatch for the Lone Wolf and Cub and Lady Snowblood movies... and likewise for the Indiana Jones, A L I E N, Batman, The Falcon, Stray Cat Rock, Superman and Beverly Hills Cop films. Plus... more gialli, more horror, more exploitation, some blaxploitation and some very strange superhero movies. Plus... I should probably get around to watching films like James Batman (where James Bond and Batman team up... no, I’m not making this up), Brazilian Star Wars and Wolf Devil Woman. Many more titles like these folks... I just have to get the time to catch up on this stuff.

And, of course, the inevitable slew of new cinema releases. People have been saying that 2016 has been an incredibly bad year for film. I’m not so sure... I feel like a lot of the DVDs and Blu Rays I wanted to explore had to be overlooked this year because there were so many interesting releases at the cinema. Will 2017 be the same? We shall all have to wait and see, I guess.

One thing’s for sure though... I’m very grateful for each and every one of you who comes on here to read my words once in a while, even if it’s only very occasionally. So thanks so much for your time and support and have a very Merry Christmas from me. And, you know... a very Happy New Year.