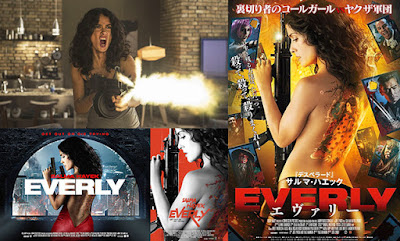 I’ve been wanting to see Everly since I first saw the soundtrack CD advertised, put out by La La Land records. It’s not a movie I’d heard of but one of the more interesting composers of the early half of the 21st Century, Bear McCreary, did the score and I really wanted to hear it. However, rather than just blind buy, I decided to wait until the movie was released in UK cinemas before I ordered it. After all, I could afford to wait and it had a machine gun toting Salma Hayek on the cover... so it was definitely going to be a film I wanted to see.

But then the usual thing happened... the soundtrack was going out of print towards the end of last year and still no sign of a movie release in this country... actually the IMDB says it was released in the UK in cinemas in June 2015 but it must have been a very limited release for me to have missed it when I was actively watching for it to come out. Also, given the nature of this movie, it seems really weird to be releasing this in any country in a month that isn’t December but... I’ll get to that in just a minute.

So, anyway, I liked Bear McCreary enough that I wasn’t going to miss out on the score before it went out of print, so I ordered a copy and then checked the Amazon listings to see if it was also on there... and that’s when I found that, not only was the movie already out on Blu Ray over here, it was also going for a very cheap price. So I figured... okay, I’ll order the movie too then and, low and behold they both came in January.

Then came my next surprise...

Glancing at the track listing I soon came to realise that this movie was, in fact, a Christmas movie. So, although both the score and the film had arrived in January... I had to wait all year until December came around before I could both watch the movie and listen to the CD. Because those are the rules of Christmas movie watching/listening... you don’t knock the universe out of alignment because you want to watch a movie before its proper time. So, yeah, after almost another year of waiting I was finally able to watch and listen to Everly last week. Yay!

The movie stars the always watchable Salma Hayek as a prostitute locked into a slave contract and trapped in an apartment for the best part of five years, unable to see her mother or her new born daughter in all this time because she is enslaved by a yakuza boss who also has the police in his pocket. However, she has finally had enough and after her latest batch of horrendous treatment at the collective hands of the "villain of the piece’s" men, she goes nuts and kills them all. The movie then becomes all about trying to get her mother and daughter to infiltrate the building she is in and to give them the money to disappear with, while trying to stay alive in said apartment, under siege conditions and constant attacks from various interested contract killers, once a suitable reward has been offered for her death.

That’s the whole plot and that’s all you need. However, while there is a lot to be recommended in this movie, there’s also some down sides to it too so, ultimately, it’s not quite the movie I was looking for, or even expecting. It does have it's fair share of good moments though...

For example, the use of smooth, fluid camera movements to capture the essence of any situation and to present it nicely framed, it seems, is the MO of the director and the crew do a really good job at getting some fine compositions on screen. Even the use of damaged walls where bullets, bombs or bazooka shells have peppered them with large holes are made use of as the camera weaves in and out of the these concrete exit wounds in its quest to allow us to track along with the central character. It’s really nice stuff and, although I hate to throw up comparisons to other directors here, it reminded me of the professionalism and consummate skill of somebody like Luc Besson so... yeah... this director might be worth looking out for in the future, methinks.

There are some really nice touches too, such as one of the corpses Everly’s stashed in a tub having a cell phone which uses the opening jingle from Danny Elfman’s score to Edward Scissorhands... it’s a cool moment. Another quite spectacular sequence shows Everly blowing one man exiting a lift filled with lethal henchmen back into said elevator with a shotgun burst and then lobbing a grenade to follow him in as the lift doors start to shut on them all. This is accompanied by an explosion just as the doors are finishing closing on the filled up lift, throwing out a giant sized, rectangular slit of high speed blood into the corridor. Nothing as drastic as Kubrick’s celebrated ‘blood and elevator’ shot from The Shining, for sure but, like I said... nice stuff.

The acting by some of the people in the film is not all that brilliant, truth be told, but somebody who really is, of course, is Salma Hayek. I’ve thought a lot of her since I saw her playing both The Muse in Kevin Smith’s Dogma and artist Frida Kahlo, in Frida, and she really doesn’t let herself down here. Quite simply, as well as being obviously quite sexy, I’ve never known why she isn’t in more high profile projects because, if you know her work, you’ll know she is a really great actress.

However, like I said, there’s also some bad stuff here and, for me, the movie loses impetus in the final third. A one room bullet fest sounds like a good idea (even now, to me) but I think this one could have done with just a little more variation in its DNA, I suspect. The amount of intrusions Everly has gets a bit boring and there’s a scene where she is being tortured by a character called The Sadist which is truly sick and fairly harrowing, I would say. That being said, because the threat of death and mutilation in this scene is so real, it kind of nullifies any belief that the character might not survive it and you are basically just waiting for the deus ex machina interventions to show themselves, one at a time... which, of course, they do.

So yeah, it dragged through the last third and was a bit overly grim, I think, for something which might be considered Christmas viewing and I can maybe see why it possibly didn’t do so well with audiences when it was released. I think if the writers/director could have possibly pushed it into a slightly different direction for the last 25 mins or so, it would have truly been a much loved movie and found its audience a lot quicker.

That being said, I still haven’t mentioned the music yet which, as I expected, is well worth the price of admission. If you like composer McCreary in his full-on Battlestar Galactica mode then this is a movie score for you. He does some great, percussion heavy, sustainable action cues here which are just what I was hoping would be the case. The CD album has five Christmas songs on it in addition to McCreary’s score; three sung by his brother Brendan and two sung by his wife Raya Yarbrough. Funnily enough, although the three Brendan McCreary performed songs are listed on the credits, alongside the various other songs used in the movie, I couldn’t actually detect much, if any, trace of them in the finished film. The two Raya Yarbrough songs are definitely in there, though, and her version of Silent Night is an especially powerful/haunting version of the song.

All in all, the film is an interesting piece of action cinema but, for my money, it gets a little bit too mean spirited in the last half an hour or so to entice me back for repeat viewings. I am glad I saw it though because, if nothing else, it means I’ve got another cool CD soundtrack to put in my Christmas spin rotation and I got to see Salma Hayek proving how good she is... even in roles like these. Ultimately, though, Everly is not exactly a big recommendation from me but if you’re a die hard action movie fan then you should probably check it out at some point. The movie itself isn’t particularly festive either, apart from the time setting, so I wouldn’t necessarily wait as long as I did to see it, either, if you do feel like giving it a go.
Posted by NUTS4R2 at 19:39