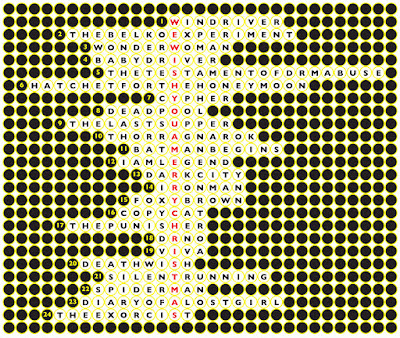 And the winner is...

It’s that time of year again to reveal both this year’s winner of my, apparently quite fiendish, Annual Cryptic Movie Quiz and, of course, to give you the answers.

Once again, let me extend my thanks to all the readers and supporters who had a go and, as always, I hope you had some fun trying to crack these.

This year we have a complete newcomer to the competition as our winner so, without further ado, let me say congratulations to...

... who was the only person this year to come up with a completely correct full house of answers.

Okay, so here we go with the answers... don’t kick yourselves too hard. ;-)

3. I didn’t lose the red back for the lady.
If you didn’t lose, you WON. Red backwards is DER. A lady is more than often a WOMAN. So WONDER WOMAN.

5. The examination of the religious ending of a British drink is medically assaulted for the thousandth time.
An examination is a TEST. A religious ending to something like a prayer would be AMEN. A British drink is TEA (let’s call it T). So TESTAMENT so far. Medically assaulted might be DR ABUSE. Slip in the Roman numeral for 1000 in the middle... M, so DOCTOR M ABUSE... THE TESTAMENT OF DR. MABUSE.

8. Drowned swimming location.
DEAD in the POOL then, I guess. DEADPOOL.

10. It’s almost a mixed up kangaroo, if you let it defrost.
If you let something defrost then you THAW it. A mixed up KANGAROO is almost RAGNAROK so... THOR RAGNAROK.

11. Tab back personified... but not quite a Hobbit.
Tab backwards is BAT. Personify it and you could end up with BATMAN. A famous Hobbit was BAGGINS but, it’s not quite that so change it a little to get... BATMAN BEGINS.

15. Cunning but why is it a mix of red and green?
Cunning like a FOX. Mix red and green paint and you should get BROWN if you’re doing it right so... FOXY BROWN.

18. Mutilated drone makes a bad guy.
Mutilate the word DRONE by taking out a letter, putting a stop in and rearranging the letters to give you famous Bond bad guy DR. NO.

23. Journal for you to keep track of the misplaced young lady.
A journal is usually a DIARY. A young lady is a GIRL. If she’s misplaced then she's probably LOST so DIARY OF A LOST GIRL.

So there you have it. Truly hope all of you that played enjoyed racking your brains as much as I did to put this together. Hopefully this tradition will carry on again at the end of the year but, in the meantime, lots of reviews coming up soon.
Posted by NUTS4R2 at 19:39