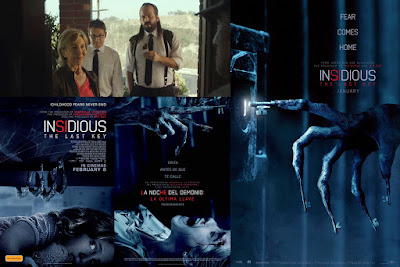 I’ve quite enjoyed the Insidious movies as they’ve been released into cinemas so far. Starting with the weakest and least compelling of the series, the original Insidious (reviewed here) was more or less an expansion/remake of the old Little Girl Lost episode of The Twilight Zone. However, both Insidious Chapter 2 (reviewed here) and Insidious Chapter 3 (reviewed here), just like The Purge franchise, took ideas from the concept pitched in that first installment and created much more enthralling and entertaining pictures out of them.

Now one of the important things about what those sequels came to be and what they are, thankfully, continuing to be in the prequel movies (parts 3 and 4) is something which I pointed out in my last review from the series and its something horror seems to do better than certain other genres... change peoples attitudes to what it's possible to portray and get accepted in mainstream movies, by stealth. And by that I mean that what we have in these last couple of films is not just a female action hero carrying the main protagonist role (which is no mean feat by itself) but, also, a 75 year old female action hero (in the form of Lin Shaye as Elise Rainier)  who is wandering around banishing demons and generally getting thrown around by them in a Marvel comics kind of way. I honestly applaud and support these films for this... where else in Hollywood are they giving action roles to heroines who are living past their seventh decade?  So yeah, I wish these films well.

Now, the bad news for me was that this was another prequel to the first two movies, being set chronologically in between the first prequel, Insidious Chapter 3 and the very first Insidious. In fact, this one is set just weeks/days before the events of original film, at the point where Elise enters the narrative of that particular supernatural adventure. Now I was hoping that this installment would finally be a sequel to the end of the second Insidious movie, where the now dead Elise is still looking after her two sidekicks in the form of Specs and Tucker (played in this one again by the film’s writer Leigh Whannell and Angus Sampson) from the other side of the spiritual realm known in this series as ‘the further’ and sees something there so terrifying that we need to know who she’s seen.  Alas, the answer to that one is not tackled here, either but, at least the film does take us right up to the first one chronologically so, who knows, if this one does well enough at the box office (it certainly deserves to) then hopefully the writers will have nowhere left to go other than carrying on from that moment in time at the end of the second.

Either way, this is another strong entry in the series which, although I didn’t prefer it as much as the previous two, still entertains and brings the scares when it needs to... not so many scares, for sure but, when it gets those shock moments right, it really manages to get the jump on the audience. Actually, I found it amusing from the chuckles of anticipation and the pent up tension in the auditorium of the screening I went to, mostly from teenage couples, that the horror film is still very much, in some ways, a kind of ‘rites of passage’ experience. I could almost see the hormones bubbling up in some of the couples sitting in my nearest proximity.

So the film starts off with an extended flashback into Elise’s childhood and we begin to see, in this and other flashbacks and, also, in those moments where adventures in ‘the further’ overlap in shifting time zones, how Elise came to be the person she is at the time of this story. We learn just what kind of burden she carries around with her, too... as we meet her family at various points in time. It’s also a nice bit of writing that some of the revelations we find out about Elise’s past are also news to her and we see how she reacts to these reveals as we respond to them ourselves.

The movie goes gets straight to the point with all the supernatural stuff here and, although there are the obvious suspenseful, drawn out scenes of lurking dread in the mix, there is no slow build up reveal to the first presence of the ghostly apparitions and, although this approach maybe shouldn’t work so well, the director seems to really get away with it very well here. It's very rapidly paced and there’s a lot crammed in. Even some of the editing is judicious with short cuts like watching Elise walk through a door in relative close up, towards the camera and then, in the next master shot, cutting to her already being halfway through the next room. It’s something which, perhaps, should seem a little out of place here, when timing in these kinds of films is a crucial element but... nope... it all works quite well and the frights don’t lose too much impact in the scenes which matter in terms of jump scares.

There’s a wonderful sequence where Elise is going through a ventilator shaft (much like Dallas in the first of Ridley Scott’s ALIEN films) and she finds her way blocked in a couple of sections by piles of suitcases. As she goes through each pile, unlocking and opening as she goes, she finds sinister contents I won't reveal here and, as she does so, we are made aware of the old ‘sinister demonic ghost's point of view’ approaching one of the suitcase from behind. Each time Elise has a case lid up, shielding her view of the rest of the shaft in front of her, the ‘ghost camera’ saunters up from behind the lid and, as we cut back to Elise closing it, we assume that something is going to be there with her as she shuts the lid to reveal it and... each time she does it, nothing is revealed. And then, after a few of these cases, we get the expected jump scare but, because the director has deftly used the old clichéd horror syntax of manipulating expectations through shot movement, the audience is effectively blinded by those expectations of just where that ‘attack’ is going to come from. So, yeah, there’s some nice stuff happening here.

We also get a possible set up for a worthy successor to Elise and, it will be interesting to see whether, if they do decide to pick up the hanging thread from the end of the second movie, they bring back this character introduced here to act as the ‘conduit person’ between Elise in ‘the further’ and the real world. I wouldn’t be surprised if that’s exactly what this character’s function is here, if the writer and producers are thinking far enough ahead.

Once again, composer Joseph Bishara provides an appropriate though somehow more restrained musical score for the film but what he doesn’t do is give it the signature, scare the hell out of everyone, extended dissonance on the revelation of the film’s title at both the start and end of the movie as the previous installments did. This was always part of the fun and I don’t know why the decision was made to not do that this time when it’s become an established part of scoring these films.

Similarly, in terms of continuity... why is this not considered Insidious Chapter Four? While Insidious - The Last Key is an okay title and makes some reference to some truly, nicely surreal uses of keys in this film... it feels almost like the people behind the scenes are bailing out of the timeline they set up in the previous three somehow. Even though it’s certainly evident that this film finds a perfect fit in its place within the series. I don’t understand why that decision was made.

Still, those are my only real complaints and although, as I said, I didn’t quite think this one as strong as the previous two, Insidious - The Last Key is still a great ride for fans of the horror genre and, if you like the Insidious films anyway, surely not one to be missed. Plus, like I said earlier, this film has a main protagonist who is a 75 year old woman... go support this stuff so we can see more films with this option on the table. Send Hollywood that message by plonking down your pennies on stuff like this... I’m glad I did.
Posted by NUTS4R2 at 18:52