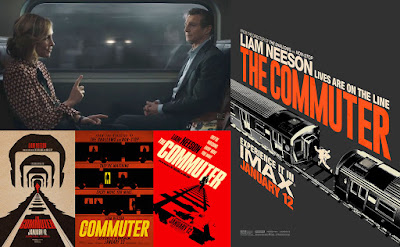 Well this movie is a pretty mixed bag, I would have to say. This is another one of those Liam Neeson action vehicles which I usually quite like the idea of, when they’re done right. However, my desire to see another of these was countered by the fact that I tend to find the director, Jaume Collet-Serra, way more miss than hit when it comes to making competent, interesting movies... even when they're headlining Neeson.

The Commuter has the benefit of an extraordinary cast supporting Neeson in his endeavours to find a person on a train using his ‘very special set of skills’... including the always stunning (and sadly underused here) Vera Farmiga, her 'on-screen husband' from The Conjuring films Patrick Wilson, Sam Neil (who I honestly never even recognised throughout the film with that worrying beard) and the even more memorable looking Jonathan Banks (from Beverly Hills Cop). And, as you would expect from such a professional cast... they all pull their weight, even when the script is weak in a lot of places.

Now, I have to say, there’s a lot of good stuff about this movie...

The opening title sequence, for example, which is a montage of Liam Neeson being awoken by his alarm, having household discussions with his family and then dropped off at the train station where he begins his morning commute into work, is built up from various different seasons and years to give a sense of the dogged routine Neeson’s character, Michael MacCauley, commits himself to... as well as building up a sense of familiarity in the audience as to various passengers on the train we’ll get to take a closer look at later.

There’s also the set pieces of suspense and action which are, for the most part, terrifically put together and not over edited... leaving them with a raw energy and sense of tension absent from some other movies in this kind of genre (this director’s movies included). It’s nail biting stuff and the sound design and effects for things like gunshots are extremely present in the mix and give an active appreciation of the implied danger the characters put themselves in.

Another plus is the superb score by Roque Banos, who really provides something that’s far from the humdrum noise I associate with a lot of action vehicles of this type, using strong melodic hooks that linger in the mind long after the movie has punched its last ticket (yeah, I’ll definitely be picking up the CD on this one when it eventually gets released). It’s also, surprisingly, well mixed into the foreground (at least on the IMAX set up I saw this on) and it really does hold its own against the noise of the blood and thunder extraordinarily well.

One last plus, for me, was the beautifully rendered end titles where the entire cast and crew list scrolls up and reveals itself to be designed like a train map, with various terminus stops and branch lines indicated, breaking off to usher in another section of the often ridiculously lengthy roll call of names that modern motion pictures seem to require. It’s good stuff and I’m all for it.

Unfortunately, there’s also some 'not so great' stuff here too...

The plot has been constructed almost like a Hitchcock mystery with added action scenes and, you can almost imagine Cary Grant or James Stewart performing in a slightly less adrenalised version of this film sometime in the 1950s. Alas, the script isn’t that great and the director manages to telegraph a lot of the little twists and turns well before they actually happen. Some of this is even revealed in the casting when you recognise a face and then wonder why they would have such a small role in the movie... with the answer to that being, of course they don’t... they’re the bad guy. So, yeah, there’s some bad stuff here.

Perhaps as bad is that the director, I suspect, seems to realise he’s stepping into Hitchcockian territory and sometimes does his best to play to that... in as unsubtle a manner as possible, I thought. As a ‘for instance’, there’s a scene where he uses that overly clichéd simultaneous zoom/push/pull effect from Vertigo (popularised by Spielberg’s use of the same technique in Jaws, somewhat) to highlight a plot point which the audience had surely guessed twenty minutes or so before and which, honestly, was so bluntly handled that I nearly burst out laughing in the cinema. Seriously, guys? I mean, I know people like to homage that shot but maybe it’s time it was left alone for a couple of decades now.

So yeah, perhaps there’s less to list on the bad side of things but it’s elements like this that are all pervasive and they do, in some ways, take a lot of the wind out of the sails on this particular movie. Still, it’s a lot better than Neeson and Collet-Serra’s Unknown (reviewed here)... so there’s that.

Ultimately, The Commuter is a likeable romp which is maybe somewhat less clever than the creative forces behind it might like to imagine but which is also quite competent and entertaining enough for a good night out at the cinema on a first watch. I have my doubts as to whether it would hold up under repeat viewings but, overall, the film is not terrible and, while I couldn’t wholeheartedly recommend it, it’s not a bad way to while away a couple of hours. Be warned, though... the Spartacus homage scene (you’ll know it when it happens) is probably going to make you groan.
Posted by NUTS4R2 at 19:42