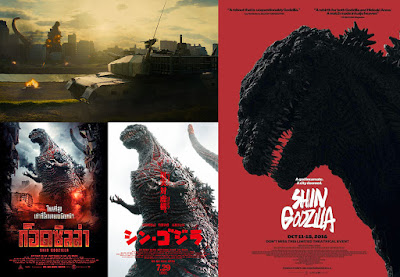 Let The Sun Shin In

Okay, I’m really grateful to be able to finally see the recent Japanese Gojira movie since the UK theatrical release towards the end of last year was practically non existent. That being said, Shin Godzilla reminded me a little of the latest Star Wars movie in terms of my general experience of it. By that I mean there are vast stretches of this movie which are deadly dull but that every now and again (every time that we see some Godzilla action, I would say) we have some really cool stuff which does a lot to outweigh the rest of the picture.

The film is actually a reboot of the character and, I believe, it’s the first time this has been properly done in Japan. Although there have been three previous ‘waves’ of native Gojira movies, each series has usually referenced at least the original 1954 version of the film. This one doesn’t and when I say it’s a reboot it’s pretty much, in some ways, a remake of that 1954 classic.

The film mainly takes place in boardrooms and focuses on the political PR and committee response to the new threat of a giant monster doing a ‘Tokyo stomp’. There are lots of actors in here who I recognised from various movies over the years and, if I could match faces to names from the terribly sparsely populated photo section on the IMDB, I could point them out more clearly. However, I can say that various people from movies such as the Takashi Kitano version of Zatoichi, Tarantino’s Kill Bill and Takashi Miike’s Ichi The Killer, among others, are here and are easily recognisable.

The film mostly takes place in various rooms with either bureaucrats trying to figure out what they should be telling the public or with a pool of ‘professional nerds’ who are coming together to find a solution to the problem at hand and, as the film progresses, sometime before the US of A, on behalf of the United Nations, drops a nuclear bomb on Tokyo in a desperate attempt to kill Godzilla. While some of these sequences are quite interesting, they do kinda get a little dull when you realise the majority of the movie is pretty much just the same kinds of discussions going on. There are not very many true hero characters who go off on their own and get into the thick of the action here... although there are plenty of candidates in this who have the kind of personality that could have carried the film in such scenes. In fact, the director seems so intent on making this look almost like a documentary film that, in one scene where officials are holding a meeting, the screen briefly blacks out and the words “Following abbreviated” are flashed up.

The film picks up a fair bit in the Godzilla carnage sequences but the introduction to the character is a bit of a slow burn.

For instance, I was completely taken aback when the sea creature who starts messing with Tokyo, who we can only see from the back fins and a huge, somewhat out of place tail, turned out not to be Godzilla at all. In fact, it looked a little like one of The Big G’s oldest foes, Anguirus. When his head finally surfaces, I couldn’t help laughing because it looked totally unrealistic with these terrible stuck on eyes. I realised that the Japanese had gone back to the whole ‘man in a suit’ way of doing things which kinda made me happy except... I just found out that the monsters in this new movie is 100% motion capture CGI. So what that means is... they’ve done their best to make them look like a badly made costume but, in fact, they aren’t (go figure). I mean, if you’d have stuck googly eyes on this thing, it could not have been more inappropriate to the tone of what I was watching.

Then came a bigger surprise because, after a while... it turns out this is Godzilla, after all. He’d just not ‘metamorphosed’ into his more familiar form yet... which he promptly does about 10 minutes later. Okay, so the strangely ridiculous eyes have gone but it still looks like a man in a suit (which I frankly love, although they might have been better going with practical costumes instead of using computers). I can also confirm that, alas, this is a much less comical Godzilla, more reminiscent of his first cinematic appearance. So anyone expecting to see him/her jumping for joy and kicking his/her heels together or teaching the offspring to blow smoke rings, as in certain previous movies, is going to be disappointed. This is a serious ‘kick Tokyo’s ass’ version of the character. How serious? Well, there were one or two surprises when he started battling those pesky human aircraft in this one.

For instance, before he starts utilising his fire breath, a little eye shield like an extra eyelid covers the eyes to stop them getting scorched. But not only does he have a fire breath... he also seems to have a laser breath, for some unknown reason, which he uses to slice up hostile aircraft and buildings as he goes about his daily carnage. The best additional surprise though, when you can accept that this creature would somehow be able to shoot laser beams out of its throat, is that the creature’s back spines can throw out an equally deadly laser grid to take out anything attacking from above. This looks duly spectacular and it’s one of the reasons I elevated it into my top 26 movies of the year (which you can read here).

That and the music.

The score combines material from composer Shiro Sagisu with new recordings of classic Godzilla themes by ‘the John Williams of Japan’, Akira Ifikube. So a lot of the familiar marches and menace music that people associate with the series are here for you to tap your toes along to. And, thankfully, Sagisu’s new compositions are, frankly, excellent and just the kind of thing you want to be listening to here. They already sound like classic Ifikube pieces and cement in with the older material perfectly. This is easily one of my favourite scores of the year, it has to be said and probably one of the better scores of the entire range of movies.

So yeah, the film uses lots of dryer, boardroom scenes to contrast with the monster shenanigans and, while I could have done with a little less meeting scenes and much more fire breathing, laser slicing, explosive action... I can kinda see why the studio went with this approach.

Shin Godzilla isn’t, in any way, a hard slog of a movie... it’s just a tad dull in certain places but it really, as I said before, makes up for it with some standout Monster VS Military action. Perhaps not everyone’s cup of tea but certainly something that I suspect will please longstanding fans of the titular monster, for sure. Check this one out if you can’t get enough of Godzilla but, if you are not that familiar with the character, maybe go back to the monochrome 1954 version instead.
Posted by NUTS4R2 at 18:54