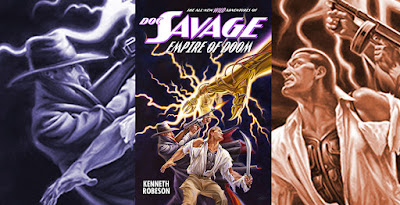 Empire Of Doom is the 20th of the new Doc Savage novels written by Will Murray, under the original name that Lester Dent used when he wrote the bulk of the series in the 1930s and 40s - Kenneth Robeson. This one is also the second literary work (unless you count other media such as various comic books over the years) to feature both Dent’s Man Of Bronze and another famous pulp character, Walter Gibson’s The Shadow (who was written by him and various others under the name of Maxwell Grant).

Now, for the most part I love Murray’s forays into the mind of Dent in these novels and, as it happens, this one is no exception... however, I read the last one where he tried to team up these two characters (who are as tonally different as night and day) in his tale Doc Savage - The Sinister Shadow (which I reviewed here) and I was somewhat disappointed. I think that disappointment stemmed from the writer being closer to Gibson’s prose in that one than he was to Dent’s and, frankly, I never found Gibson’s The Shadow novels to be anything near as readable as Dent’s Doc Savage tales. So it was well done to Murray for effectively evoking the style of The Shadow in that but, yeah, it didn’t find it nearly as entertaining as the majority of his other Doc Savage works.

That being said, I have to say that Empire Of Doom reads like a full on ‘Kenneth Robeson does Doc Savage’ tale and... yeah, it’s excellent. The Shadow fits right in here and I got a lot of enjoyment out of it. The book starts off strongly with the theft of a Navy Destroyer during the Second World War by The Shadow’s arch enemy, Shiwan Khan (who was the villain of choice opposite Alec Baldwin’s version of The Shadow in the 1994 movie). He immediately uses it to launch two missiles into the skyscraper where he knows The Shadow’s Inner Sanctum to be. Midst all the confusion, as the local fire service try to combat the resultant blaze, some of Khan’s minions infiltrate The Shadow’s lair disguised as firefighters and make off with all of the terrible, fantastical weapons the dark avenger has confiscated from criminals over the years.

While Doc Savage tries to track down the stolen destroyer, one of his five companions, Long Tom, is taken over by Khan’s mind control and kidnapped, The Shadow also tries to track Khan’s progress and, inevitably, the two heroes join forces in an uneasy alliance against the army of darkness that this evil nemesis is recruiting.

And that’s about all I’m going to say regarding the specific content of the novel but, if the plot hook sounds a little familiar to longtime Doc Savage readers, it’s pretty much lifted from the 1938 Doc Savage novel, Fortress Of Solitude. That’s the one where Doc’s one and only arch enemy Johnny Sunlight, who would return for his second and final appearance in The Devil’s Ghenghis, manages to infiltrate Doc’s secret lair and abscond with all the weapons which are ‘too dangerous to remain in the hands of mankind’. So some readers should feel right at home with the opening of Empire Of Doom.

It’s a romp and a half and, though not all of Doc’s ‘Amazing Five’ are present (Johnny is off somewhere on an archaeological dig), it manages to pack in the rest of them quite credibly and it even has a very brief cameo, of sorts, by Doc’s famous cousin Pat Savage, although I would have liked to have seen more of her in here. It also has the ‘other’ Lamont Cranston and this book is helpful to those of us who are not big readers of The Shadow and who are somewhat hazy as to the nature of his secret identity. Is The Shadow Lamont Cranston or Kent Allard or both... or neither? Hard to say because the point seems to be that The Shadow can impersonate them whenever he wants to and, of course, he and ‘the real Lamont Cranston’ use this trick to confound and confuse Doc and his companions as the book goes on.

Other than that, the novel is pretty much business as usual... Murray knows how to spin a good, globe hopping yarn and this one is another real humdinger containing mind control, buckets of severed fingers, brain washed warriors with almost impervious armour and electrocution fingers, wingless planes, a black ray that brings a darkness over everything it touches and which kills electrical power and... oh yeah... there’s even a giant, mechanical robot that can crush you if you let it get near you. The book is full of the usual thrilling escapes, treachery and scenes of combat that are a hallmark of the Doc Savage adventures.

Also, a nice touch in this one, is that Murray finds a way to turn the weird trilling sound that Doc unconsciously makes in times of intense, penny dropping thought into a useful plot point towards the end of the novel. I won’t say too much about that but it comes in very useful when it seems that all the chips are down for our two heroes and death is creeping nearer.

Another thing which was interesting to me and which I didn’t realise before was that The Shadow has a couple of islands where he tries to rehabilitate certain criminals that he captures and it’s obviously a ‘common ground’ between him and Clark Savage Jr, who also has his own methods for the ‘cure’ and rehabilitation of the villains he captures. Now I believe Doc’s ‘Crime College’ was infiltrated on at least one occasion in the past (I think it might well have been the Doc novel The Annhilist from 1934) but this time it’s the turn of The Shadow to have his ‘rehabilitation scheme’ invaded and his subjects converted into loyal followers of his arch nemesis. It’s all good stuff and I appreciated the way Doc and The Shadow interacted with each other here, with Doc never really trusting the invisible avenger or Cranston completely through the tale. It’s even uncertain as to what Doc is going to do with The Shadow at the end of the book, once the super villain’s account has been settled. Although, of course, there’s the obvious ‘incident’ which takes place at the end of the novel which makes any speculation with regards to the fate of Cranston's sometime alias redundant.

Anyway, that’s me caught up for a bit in terms of Murray’s new and, hopefully, continuing adventures of the Man of Bronze. I’m hoping he’ll be releasing at least another one of these sometime this year but I’ve got no idea if or when that will be happening. I would also like to see him write the second of his solo Pat Savage adventures too, after his first one, Six Scarlet Scorpions, was so well handled (reviewed by me here). In the meantime I will have to content myself in saying that, if you’re a Doc Savage fan, then Empire Of Doom is another of Murray’s better entries into the series and you should definitely take a crack at this one. It’s a pretty exciting tale that Murray/Robeson spins here.
Posted by NUTS4R2 at 18:48