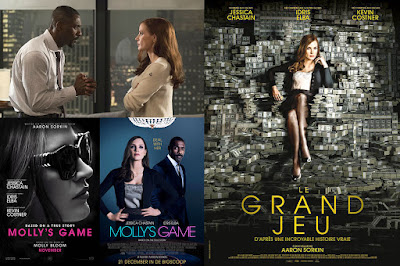 Tech The Walls
At House Of Molly

Well that’s the first movie of my year done and dusted. Molly’s Game opened on New Years Day here in the UK and I knew it would probably be a pretty good one, based on the trailer and the one reason I wanted to see this... Jessica Chastain.

I’ve liked this actress since I first saw her in the excellent horror movie Mama (reviewed here) and my fondness was compounded by seeing her in other fantasy roles such as her excellent turn as the lead villain in Crimson Peak (reviewed by me here). However, it was her true powerhouse of a performance in last year’s absolutely astonishing Miss Sloane (reviewed here) which made me realise just what an actress for the ages she really is. If you want someone who can carry a film with a performance of someone who can demonstrate a confident sense of power while simultaneously showing the vulnerability of a character’s facade shining through, then Jessica Chastain is the actress for you.

And she relly does carry the movie on her shoulders, along with some very able support from the always watchable Idris Elba as her attorney and some nice work from Kevin Costner as her dad, which gives him some of the better dialogue of his career to work with, as far as I’m concerned.

The film tells the real life story of Molly Bloom (who wanted Chastain to play her in this film iteration of her, apparently) and is based on her book of the same title. In it she tells the story of how, after dropping out of being an olympic skiing champion after an accident which cost her a lot of her spine, she became embroiled in running gambling games for her awful boss, before setting up and running her own, ‘mostly legal’  gambling dens which were then raided by the FBI who arrested her for connections to the Russian mob, amongst others (people who she did not know were connected in any way to a criminal organisation, by all accounts).

The film is interesting in that the structure is all over the place, flashing back to childhood versions of the character and also to different points in her adult life whenever it needs to but one of the strengths of the great writing from the director here is that this jumping around never feels chaotic. Instead, it informs the steadily unfolding story of Molly’s problematic career choice in a way that it slowly reveals certain key aspects of her character and her relation to those around her in an intelligent and, luckily for the audience, entertaining manner.

The film’s biggest strengths are the quality of Sorkin’s dialogue and the incredible performances of all concerned here. Even the minor characters seem well acted and add value to the whole. There are a couple of points I’d have to be a little critical of, however.

One of the disappointing aspects of this movie, I felt, was that the shot design is merely extremely competent, rather than outstanding. Sure, the film is dominated by interior sets and the director sometimes makes use of the vertical, rectangular blocks to cut out a pleasing composition on occasion but... nothing that really stood out in the same way that, for instance, the aforementioned Miss Sloane shone in terms of the visual aspect of the picture. That being said, it’s probable that the director made the decision to steer clear of allowing the compositions to draw attention to themselves, perhaps assuming that this would be a barrier to the smooth running of the film. Personally, though, I don’t think that would necessarily be a valid choice (if, indeed, it was the direction he went with here) and I think films like this one, which are mostly all about the dialogue plus the information given to us on the ‘voice over’ narrative, can benefit from a more overt, visually arresting style.

The only other bad thing I could see here was that I was thrown into absolute confusion by the fact that the lawyer played by Elba was able to read Molly Bloom’s real life published book while, simultaneously, she’s still looking for a publisher for it. I was not clear as to whether they were talking about a second book or something else. The IMDB cleared that up for me when I saw that, yes, the book wasn’t published yet in real life at the time of the events depicted in the movie and that, somehow, we were being asked to believe that the book was somehow, like Shrödinger’s Cat, in two possible states of being at the same time... already published while at the same time, unpublished. I don’t know why we are expected not to question this but it was very clearly something which confused the heck out of me and I don’t know why the writer/director did that.

The amazing Daniel Pemberton’s score is, sadly, not that evident in the mix and didn’t make much of an impression on me during the course of the film. However, there is a CD being released for this in four days time and I might have a listen to the samples once they’re up to see (or hear) if it’s something that would reveal a more rewarding experience away from the movie if I bought a copy. As it stands, though, it certainly doesn’t jar with the on visuals or general tone of the piece and it is, at the very least, an appropriate score for the movie. So there’s that.

As for everything else about Molly’s Game, though... pitch perfect and the good stuff here more than outweighs the problems I had with it. Certainly a good one to start the year off with and I have already started recommending it to my friends to take a look at. I can only keep my fingers crossed that they’re all at least as good as this one in the coming months.
Posted by NUTS4R2 at 17:48