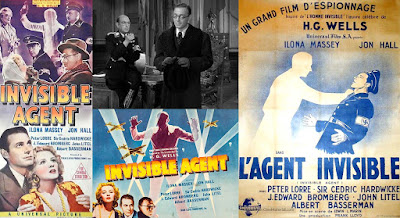 I Spy No Spy

So next up from Universal’s 'Invisible franchise' was their attempt to aid the war effort in 1942 with the Invisible Agent. This one takes the grandson of the original Griffin character, who has changed his name to Frank Raymond (played by Jon Hall) in order to avoid association with the actions of the original character (which I guess dates the original movie back generations... although I’m really not sure how, time wise, The Invisible Man Returns (reviewed here) could place this relation as a grandson.

The film starts off with quite a dark tone in America, when some German and Japanese allies led by Sir Cedric Hardwicke as SS Man Conrad Stauffer (who you’ll remember from both The Invisible Man Returns and The Ghost Of Frankenstein reviewed here) and Peter Lorre as the Japanese Baron Ikito (I guess it takes an Austrian to play a credible Japanese man?), try to get the formula to invisibility at the start off the film but Frank manages to barely escape with his life, after they nearly cut his fingers off in one of the paper cutting machines he has in his stationer’s shop. After Frank’s ‘cover’ is blown, the US army asks Frank for the invisibility formula but he refuses. The next thing we know we have footage and newspaper reportage of the attack on Pearl Harbour and Frank changes his mind. agreeing to let the US army make one of their secret agents invisible, on the condition that it’s him instead of a member of the military, so nobody else gets hurt by he formula (which is an interesting point in terms of the dangers of the formula because, this is the only point in the film which these dangers are addressed... I’ll mention that again a little later).

So next thing you know he’s flown to London and then being parachute dropped into the heart of Nazi Germany to find a reliable informant, high ranking lady Maria Sorenson, who is played by Hungarian actress Ilona Massey... who looks wonderful in this and who actually receives top billing above Jon Hall in the cast list.

And it’s a fun romp of heroic wartime propaganda as Frank Raymond infiltrates the Germans to discover their plan to bomb New York, has a comedy routine as an invisible third for dinner when Maria dines with a high ranking member of the SS and ultimately flies with her back to the UK after bombing the nazi planes and generally succeeding in his mission behind enemy lines, on most counts. The film also has a scene with Peter Lorre where his special ‘surgeon’ is played by his once Mr. Moto co-star and number one son himself, Keye Luke. It’s unusual and interesting for me to see Luke playing what amounts to a ‘sinister by proxy’, villainous role in the story.

And, for the time and even, in some instances, for contemporary times, the special effects are quite well done. When Frank parachutes into enemy territory after his plane is shot at by the Germans, he strips off his clothing in mid air so it’s just the parachute and harness left at the end of the sequence, still securely fastened around his invisible body and... well... it certainly looks pretty convincing still, even on Blu Ray. Ditto for a scene where an informant hands him a glass of coffee and he takes it and drinks it down invisibly with no cuts to the shot. It looks amazing although, later, when the informant is pictured on his own, I noticed his hands went a bit transparent in one area of the shot so there’s a clue there to the photographic process used, I guess.

It’s also the first time, I think (I may be wrong), when the invisible hero uses cold cream and spreads it over his face in shot so you can slowly see his features materialise. I used to see David  McCallum do this more or less every week in the 1970s on his The Invisible Man TV show, I’m sure, but for 1942, the sequence is no less well done and must have been pretty effective to audiences seeing this on first release. It’s nice stuff.

Another interesting thing that strikes me about the film... and I’m sure that this is true of a lot of the films made at the time about a similar subject... is the mixed nature of the tone. It’s trying to be light and comical but the darkness inherent in the World War II situation is also felt and portrayed in a kind of, ‘matter of fact’ way which almost undercuts the atrocities that it’s not shirking at dealing with. For instance, one of Frank’s informants is ‘questioned’ by the Nazis and then asked to sign a declaration saying that when they released him they had treated him well. He can’t however, sign it like they ask because they’ve already broken all his fingers.

Similarly, the demise of two of the main villains is fairly bleak. When it’s clear that Stauffer and Ikito have failed in their mission (and have grown to show a lot less respect for each other than when they were first introduced into the plot), Ikito shows Stauffer what it’s like to ‘die with honour’ by stabbing him to death and then, in a poetic moment of the dark propaganda machine in action, tears Stauffer’s swastika from him arm and wipes his bloody knife on it before committing seppuku himself in another grim moment.

What is interesting in terms of the continuity with the rest of the series... or lack of it in this case... is that the process whereby the invisibility chemical slowly, over a number of days, causes madness in the subject, while hinted at tangentially in the early part of the film, is completely forgotten as it would be inconvenient to the plot. Frank never once looks like his thinking is compromised and he stays an ‘invisible hero’ throughout the course of the picture. I can’t remember if this plot point is brought back for the next movie but, yeah, it’s pretty much dumped here.

Other than that, though, I don’t have much more to say about Invisible Agent, other than Hans Salter is listed as musical director and some of the cues recognisable from The Wolfman (reviewed here) and Return Of The Invisible Man make their way into this, freshly recorded in different orchestrations (it seemed to me), as part of he score. But Invisible Agent is fun, the good guy gets the girl (who would also turn up in Frankenstein Meets The Wolfman) and a blow is struck against Nazi Germany... in Hollywoodland at least. It still holds up today in sequences where you wouldn’t expect it to (such as many of the special effects scenes) and it’s something I’d recommend to most cinephiles interested in this period and genre of American cinematic history.