The Castle Of Fu Manchu 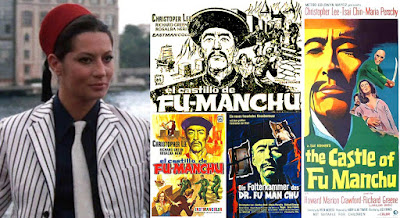 Okay, so I said that, as much as I love Jess Franco, after seeing his previous effort in The Fu Manchu Cycle, I wasn’t exactly looking forward to this one and, frankly, I was right to be thinking that. That being said, The Castle Of Fu Manchu is actually slightly better than The Blood Of Fu Manchu (reviewed here).

Once again we have the regular cast of Christopher Lee as the titular character, Tsai Chin as his daughter and Howard Marion-Crawford as Nayland Smith’s assistant Dr. Petrie. Marion-Crawford died shortly after filming this one and, frankly, he does kind of look on his last legs here (check out Stephen Thrower’s extra feature on the previous disc in the series to get a quite credible explanation of just why the performances in the two Jess Franco films look a little half-hearted and phoned in). Returning from the last film we have Richard Greene in his second go round at Nayland Smith and, I’m happy to say, he has a lot more to do here too. Not a huge deal but, you know... more.

I knew this was a troubled production as soon as I started watching this one when I realised that pretty much the entire pre-credits sequence was edited footage from two completely different movies. One of them being from the climactic scenes of the earlier film The Brides Of Fu Manchu (reviewed here) and the other I somehow managed to correctly identify (although I’ve never actually seen the film itself) as being from the black & white 1958 movie A Night To Remember, with the Titanic doubling as a ship destroyed by what I think must be Fu Manchu’s deadly ice weapon... although the true nature of the device with which he threatens the world seems to be deliberately unclear, at least in scientific terms. For some reason, the footage mixed in from A Night To Remember is dyed blue, possibly because the producers were maybe trying to distract the audience to thinking they were using some kind of night footage, perhaps? I’m not so sure it’s... well it’s pretty obvious and just looks completely out of place and, also, way more interesting than a lot of the rest of this film.

So yeah, budgetary problems which would make sense seeing that Fu Manchu decides to destroy a big dam with the weapon as another demonstration but a) there seems to be no explanation of how the dam is in any way affected by the mechanism that causes its destruction, the writers don’t seem to give a damn, so to speak and b) because the actual footage of the dam bursting is tracked in from a film I’d not heard of before called Campbell’s Kingdom. Which explains why, if you look carefully, you can see Dirk Bogarde and Stanley Baker running around in one or two shots (which is what prompted me to investigate because, I was pretty sure they just weren’t around as background extras in a scene).

Also, once again, Fu Manchu threatens the world with some bizarrely indescribable destruction unless ‘the world obeys him completely’ but... and this now seems to be a theme in series... it’s still not really made clear what he actually wants. Just that he wants it... or else.

And in this film especially, everybody seems to be either discovering a necessary clue a fair few times... such as Smith figuring out the source of the opium required is in Panama, then making the revelation again later and then somehow figuring out they need opium which, yeah, they also already knew... or in the case of Fu Manchu himself, asking for information he already has. Such as when somebody tells him that he has Nayland Smith in the building just across the water and they will give him over to him if he releases a certain prisoner... and then Fu Manchu interrogates him as to where Nayland Smith is and, you know, he gives him the exact same information again, like everyone is just going around in circles. I can only suspect that the script was changing here at an alarming rate and scenes were maybe shot and then different ones also shot as an alternative and then, maybe, with not enough money to finish the shoot, all the versions of scenes or logical deductions were just edited into the same picture to pad it, hence the further need for tracking in footage from other films too. I have no idea but it’s as good a guess as any, I suppose.

So, yeah, cheap and cheerful but way better than the previous film, although that’s obviously not saying much. However, there are some nice things to watch out for. For instance, Rosalba Neri wearing a fez... that’s got to be worth the price of admission alone. And, yes, she looks ridiculous but, you know, enjoy it while we have it. Also, although this is certainly not Franco at his best as a director (and not too far from his worst), he does manage to get in some more creative shot designs as in some of his other, more lionised films and there’s some lovely lighting used in Fu Manchu’s castle where he pitches a lot of purple against green and sometimes red. This film looks very nice in some sequences but, in this case, a good looking film does not add up to it being more than the sum of its dire parts, alas.

Actually, one of the more ‘creation through necessity’ Franco moments comes when Christopher Lee is spliced into the footage watching the destruction of the damn. Some of it is from master shots of something which actually belongs to the scene and other stuff in close up is spliced in from what is obviously an entirely different studio setting, possibly where Lee’s wearing a different costume too. It actually put me in mind of some of those earlier Russian propaganda films by the likes of Sergei Eisenstein, where he would deliberately take a character out of context for the close ups. So that was kind of interesting. It’s also nice to see, again, Franco turning up in one of his own movies (at least he’s not focus pulling with his spare arm while still in the shot on this one, I presume) in an uncredited but in no way minor part. I always enjoy seeing him pop up like this so, if you’re a Franco fan, you might definitely want to check this one out.

That being said, the film is still a bit of a mess and I definitely wouldn’t recommend it to most people. Indicator have, as usual, pulled out all the stoppers on this box set Blu Ray restoration of The Fu Manchu Cycle but, while this disc has a few extras, such as The Coughing Horror, a restored half hour episode from the silent film serial sequel, The Further Mysteries Of Dr. Fu-Manchu, I noticed that this is the only disc in this set where they couldn’t find anyone to record a commentary track. Maybe it was time reasons or maybe, you know, they just couldn’t find anyone to say anything polite about the movie but it’s a shame they couldn’t get Francophile Stephen Thrower to do a commentary for this. That being said, the film is still a valuable addition to the set and I think Indicator have, once again, done themselves proud. A sturdy release of a not so sturdy sequel. Grab this box set though because, yeah, it’s precious treasure in Blu Ray form.