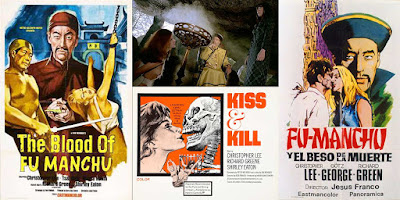 Wow, this is a terrible movie. In my review of The Vengeance Of Fu Manchu (which you can read here), I said that at least the next one would be more interesting. Well, I was right in so far in that it does have a couple of points of interest but, honestly, these didn’t stop the film from being a truly dull affair and, for me, an even lower water mark in the series than the previous.

So, The Blood Of Fu Manchu is the fourth of the Harry Alan Towers produced cycle, restored and uncut for this truly wonderful The Fu Manchu Cycle 1965-1969 boxed edition from Indicator. Once again the film stars Christopher Lee, Tsai Chin and Howard Marion-Crawford as Fu Manchu, Lin Tang and Dr. Petrie respectively. The film also stars former Robin Hood, Richard Greene, as the latest screen incarnation of Nayland Smith and Maria Rohm, who I believe was Towers’ personal love interest at the time. She certainly appears in a fair few of both his and Jess Franco’s movies from this period. And there’s also an appearance from former Bond girl Shirley Eaton which, frankly, was spliced in without her knowledge (until years later) from one of the Sumara movies she made (possibly The Girl From Rio, directed by Franco, although that one wasn't released until the following year). In fact, the card on screen reads... “Guest starring Richard Greene as Nayland Smith and Shirley Eaton”... so if you read that the wrong way you could be forgiven for thinking that Richard Greene is actually playing Shirley Eaton himself but, alas, he doesn’t put on a blonde wig so he can start acting like a femme fatale in this one.

So, yeah, Jess Franco is a director I find very hit and miss. He often made several films a year (his total just before his death, according to the IMDB, was 207 films directed by him) and often also starred in them and, in one anecdote about him, was also pulling his own focus when he was appearing in a shot... at one point reaching around the frame for the camera controls. He often, from what I can tell, secretly diverted the budget for one film into two or three movies and, I suspect that’s what possibly happened with this one, which was filmed back to back with both the next (and final) movie in the sequence. He is, quite rightly, a legend in the world of directing and I’ve covered a few of his films here such as Countess Perverse (reviewed here), She Killed In Ecstacy (reviewed here), Female Vampire (reviewed here) and his classic, Vampyros Lesbos (reviewed here).

Now, I’ve marvelled at some of his films and the brilliant shot designs. I’ve also heard people complain about the amount of times he uses zoom shots and rack focusing in his films but, often, I’ve found that they can come off as a quite creative use of this technique when he’s got his eye in. Here, alas, the film is filled with irritating zoom shots and... yeah, most of the shot compositions did nothing for me, to be honest.

It’s a dull affair but, even the ludicrous nature of the story doesn’t make up for things. The plot is that Fu Manchu sends out his young ladies to kill his enemies with their poison lips. First the victim goes blind, as is the case with Nayland Smith at the start of the movie and then, after a number of days, said victim succumbs to death. Indeed, in some territories like the US, the film was renamed Kiss And Kill, which just goes to show how the initially successful run of films had got distributors losing confidence in the ‘Fu Manchu brand’ in such a short space of time.

And, yes, we all know of the female assassins in history who have been slowly primed to become immune to deadly poison and carry that poison in their lips to send a victim to the grave. Here, however,  the method of despatch makes no sense in any way shape or form. Basically, the villain gets a certain snake to bite a girl and then, instantly, she’s somehow immune to the poison without dying from in and we see that, in less than a minute later, her kiss carries the deadly poison to another. What the actual...? And then, to pile on the insults to the negligible intelligence needed to recognise the preposterousness of such a proposition, we are told that the girl’s blood is also a vaccine for the poison. This allows Petrie to pull a last minute rescue for the now blind Nayland Smith towards the end of the picture by giving him a makeshift blood transfusion. And when I say makeshift I mean it. He just cuts a girl’s arm and then Smith’s arm and... just squishes the scars together which, more or less, serves to heal Smith in what seems like minutes.

Not only that but, there’s a subplot in the film about a kind of Mexican style bandit and his gang who are killing the good and bad guys willy nilly and... it’s just awful but it also takes up a good majority of the screen time and threatens to completely swallow up the main through line of the movie. Fu Manchu and Nayland Smith really do seem to take a back burner to the action in this one.

Being as it’s Jess Franco we’re talking about, there is actually some limited nudity in this one (which is now finally restored to the prints) but, yeah, it doesn’t really add anything to the impact of the movie, or lack thereof. The music by Daniel White is also quite terribly married to the on screen visuals and one gets the impression that it might even been written ‘away from the images’ and then just needle dropped into completely inappropriate places by Franco.

And that’s really all I’ve got on The Blood Of Fu Manchu... I like Jess Franco, I really do. But this is a truly dull and lifeless affair and it’s such a contrast to the snappy direction that Don Sharp brought to the first two movies in the cycle. As usual, Indicator pulls out most of the stops and the disc is full of extras including a talk with Franco expert Stephen Thrower, which sheds some light on certain elements of the making of the last two in the series and also a wonderful half hour episode, The Fiery Hand, from the 1923 silent film serial, The Mystery Of Dr. Fu-Manchu. But, yeah, extras aside, I couldn’t recommend this one at all. Easily one of the worst Jess Franco movies I’ve seen, I’m sad to say. Not expecting too much from The Castle Of Fu Manchu now but, yeah, that will be the subject of my next review.