The Face Of Fu Manchu 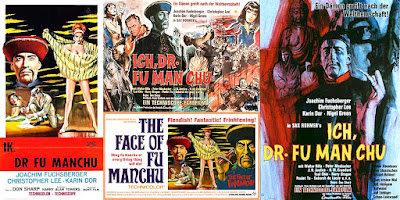 The Face Of Fu Manchu is the first of a box set of five new Blu Rays put out by the Powerhouse/Indicator label called The Fu Manchu Cycle 1965 - 1969. It’s the first really great package for these films on home video in the UK (after countless releases on far away shores) and, like many of the Indicator releases, crammed full of extras, a booklet, postcards, posters and beautiful HD restorations of the films.

I first saw these on BBC2 in the early to mid 1970s, when they used to show around about 5.40pm. It was one of those things we watched as a family, at the time, on a black and white TV set and, I’m sure, in a ‘pan and scan experience’ (which became the bane of my life in terms of trying to watch films on television in this country in the 70s, 80s and 90s). Now, this wasn’t the first time the infamous Chinese doctor had appeared in film but the cinematic scene for his particular brand of devastating villainy was less in demand by the 1960s. There were silent film serials, three talkies for Paramount starring Warner Oland as the devil doctor (before he went off to play Charlie Chan in a whole series of movies), one with Boris Karloff and Myrna Loy, and a TV series with Henry Brandon in the 1950s which didn’t really go anywhere and which, I seem to remember, was just about beginning to seem a little ‘politically incorrect’ for its time... not that they had that catch all buzz phrase to excuse censorship back then.

So when quickie exploitation producer Harry Alan Towers, who had produced some successful German Krimi, came up with the idea of bringing back the role of a running super villain into cinemas, he bought the character rights from Sax Rohmer’s widow and then came up with his own scripts (written under a nom de plume), because it was cheaper than buying the rights to the actual books.

Sax Rohmer was the popular pen name of Arthur Henry Ward who, after some initial success with the character with the first three books, after a very long pause, wrote another ten. I read these around about 15 years ago and they weren’t what I was expecting. Fu Manchu is not all about torturing and killing people (although the subject does tend to turn up)... they were more pulp adventures in the style of many of the time and I have to say I loved them. The main protagonist for a number of them was Nayland Smith, sometimes aided by Dr. Petrie... although the regular protagonists did tend to come and go and then return again as the stories were written. Asides from Fu Manchu himself, his evil daughter Fah Lo Suee was also a regular character, although she is often given a totally different name, depending on which film series you watch. In these five she is played by Tsai Chin, who starred in this full cycle alongside Christopher Lee in his ‘Chinese make-up’ as the title character. She regrets doing them now, I believe.

Howard Marion-Crawford is also in all five films as Dr. Petrie but the actor playing Sir Nayland Smith chops and changes a few times. Marion-Crawford would die fairly early in life, the same year that the last of these was released, in 1969. In this one he is assisting Nigel Green in the role of Smith, an actor who I always like although he also died early, in 1972, from an overdose (possibly accidental) of sleeping pills. He plays the role absolutely beautifully, I have to say and it’s really a shame that he didn’t go on to do more of these ones.

Completing the main cast are Joachim Fuchsberger... who acts as a kind of additional, younger Dr. Petrie supplemental figure to take on more of the physical action... and Karin Dor as the daughter of a scientist who Fu Manchu kidnaps, to perfect a killer virus to wipe out cities in England if his demands are not met. I found it interesting that, after showing his hand and announcing he will be making his demands in two days, the plot is foiled and we never get to see just exactly what his demands are. Also, be on the look out for a couple of nice cameo scenes by famous British actor James Robertson Justice... as the head of a museum which has the ‘final secrets of the black poppy potion’ that Fu Manchu needs to enable the scientist to concoct his deadly poison. I found it interesting, since I’m writing this article days after a possible vaccine to Coronavirus ‘may’ have been found*, that one of the primary concerns is keeping the poison at the correct cold temperature so it isn’t rendered useless.

Anyway, despite being very cheap but, absolutely cheerful and, perhaps, because all of the cast are playing it absolutely straight... the film was a huge success (especially in America where the publicity department had Fu Manchu For President posters made up during the elections... apparently he got a lot of write in votes and, if you pre-ordered the box set direct from Indicator as I did, you’ll get an additional reproduction poster added to the set... alas, mine arrived with a torn corner). So a new, mini franchise of diminishing returns (and possibly diminishing quality from what I’m hearing... I really can’t remember these films very well) was born and thrived at a rate of one picture per year for five years.

And it’s a real humdinger of a pacey story... beginning with the execution by beheading of Fu Manchu himself at the start, witnessed by Sir Nayland Smith. It’s a great scene and the aftermath, a static long shot of everyone leaving the square in which the execution took place, leaving Smith and the headless body in the centre of the screen while the rain and thunder starts hammering down, is when the opening credits play out, without music. Actually, the film is very sparsely scored indeed, with very few musical cues and the only thing I can think of regarding this is... orchestra time isn’t cheap and these were made on a very small budget.

The film looks great though and Sharp does some really nice stuff with some of his shot compositions. For example, there’s a great scene where Fu Manchu and his daughter are waiting to hear some news on the radio. Her head is in close up filling the left third of the screen, looking at the big radio also in close up filling the right third of the screen. Framed between them in long shot is Fu Manchu sitting on his throne. Yeah, visually interesting shots like these are why I watch movies, to be honest.

There are some curious things happening too. For instance, there are quite a lot of ‘day for night’ filters used in some sequences but, in one scene only, the screen is also washed a dark blue. It looks great but I could find no visual correlation between this and the way the rest of the night sequences in the film were handled. Also, when Fuchsberger and Green have a fist fight in a darkened room before it’s revealed that the intruder is Smith himself, there was no way I would have recognised it was Nigel Green’s character because the guy doubling for him during the fight is way fatter and looks nothing like him. Such is the easy charm of these films that I love these little glitches rather than having them spoiling the movie for me.

There are some very nice moments too. For example, I haven’t heard the term ‘pea souper’ in relation to the London fog for a very long time (even in movies), so that was nice. Also, Fuchsberger has a narrow escape when he clambers up a load of cardboard tubes in a warehouse which are tied up with string  and, as two of Fu Manchu’s dacoits run up after him, he cuts the string as he jumps off and the rolls all... well... roll away from under the feet of his pursuers. Admittedly, the stunt would probably have been more dynamically staged nowadays but, it’s a nice idea and I appreciated it.

The film finishes with the supposed death of the title character, which you totally don’t believe because you always hear him just before the end of the credits of each film heralding his return... but I was a bit surprised that Smith and his allies thought it was okay to blow up a whole Tibetan monastery of people just to kill the villain and make good their escape. I see that as more than a little problematic.

All in all, The Face Of Fu Manchu is a total romp and I had an absolute blast with it. The presentation is fantastic too and, among the extras on this particular disc, is a nice piece by Sir Christopher Frayling who talks about the author, the character and the continual proliferation of the racially prejudiced undercurrent ready to latch on to the threat of The Yellow Peril... a point he makes with a bang up to date story about a student who was beaten up during the coronavirus lockdown. I’ve said before that there are quite a few absolutely brilliant Blu Ray boxed editions which have found their way onto the marketplace recently and, honestly, this is one of the best of them. If you have an interest in the character or this particular period of British movie making then it’s definitely one to pick up. Absolutely brilliant and I can’t wait to watch the next one. The review will follow shortly.

*Sorry, my scheduling of these reviews depends on various other factors and this review was supposed to go up last year.

The Castle Of Fu Manchu