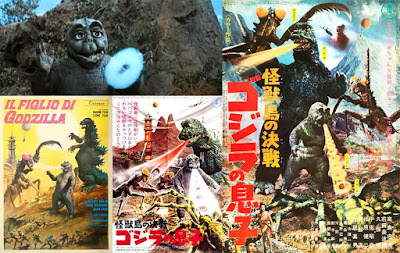 Son Of Godzilla
aka Kaijûtô no kessen:
Gojira no musuko
Japan 1967 Directed by Jun Fukuda
Criterion Blu Ray Zone B

Jun Fukada returned in the next Godzilla film in the franchise, after his work in the previous film in the series, Ebirah - Horror Of The Deep (reviewed here). This one, Son Of Godzilla, sees the transformation or, some might say, devolution of the Godzilla character completed, going from out and out villanous menace in the early films, slowly evolving into heroic defender and protector of Japan and, for this one, he and his son Minilla (or Minira in the original Japanese, obviously, as short for Mini-Gojira, I suppose) are pretty much the cutesy comic relief of the film.

The movie starts with an insert shot of some planes in stormy weather who stumble upon Godzilla at sea, who himself seems to be mysteriously called to an island. The timing seems almost off here in terms of the timeline of events in the movie as Godzilla arrives (again) on the island later in the film but I’m guessing that, since the film is mostly ‘monster light’ for the first half, this and another scene showing a Kamacuras, one of the giant preying mantis creatures that populate the island which is the film’s only setting, are here to give us a glimpse of what we are all waiting for later in the story when the plot decides to get out of the way.

Said plot includes a Professor played by Tadao Takashima... we all know he’s a professor because barely a shot goes by with him in it where, no matter what is going on, he doesn’t have a pipe dangling out of his mouth... and his team of volunteer researchers who are doing weather experiments to try and freeze the island so we can later, in 100 years or so, transform fallow regions of the Earth like the Sahara desert into something which a starving and over populated mankind can grow things in to feed the planet. However, a young reporter played by Akira Kubo travels to the island to get a story about what they are doing there. Cue the usual antics until the reporter and professor bond and the reporter is allowed to stay... although nobody believes him when the sees the only woman on the island, played by the very interesting but underused actress Beverly Maeda, who has survived on the island alone since the death of her archaeologist dad in the 1950s.

However, their experiments go wrong as the calls from a giant egg upset the delicate controls of the experiment and they end up making it even more tropical and unlivable as an island. This causes the mantises to grow even larger and, also, for the egg to hatch to be Minilla, Son Of Gozilla, who is in immediate peril from said Mantises until his father finally arrives to kick ass, teach his son how to blow fire... in a wonderful and much re-used sequence in the movies where the cute, young tyke keeps blowing little smoke rings instead... and see off the other main monster in the film, a giant spider called Kumonga.

It’s a playful and fun film, for sure but, it’s a real sea change in the series for fans of The Big G as he originally used to be, continuing the trend from the last installment. Right from the start, with Masaru Satô’s quite wonderful and dynamic score, the stage is set with the whimsical and comic nature of the film played full throttle in terms of the musical content. It’s a fun listen away from the movie and equally appropriate to the on-screen visuals but... it’s a far cry from the serious but beautiful melodies of the films scored by Ifikube. Still, great stuff though.

One strange thing that happens, around about the twenty minute mark, is that the film suddenly takes on a narrator for about a minute, to explain to the audience just what is going on as a result of the failed experiment of the professor and his crew. It’s almost like the producers decided the plot was somehow just a little too convoluted for the target audience and decided to over explain things at the post-production stage, with absolutely no context as to who the narrator is and why his voice suddenly enters and then exits the narrative so inexplicably. It doesn’t hurt the film as such... just seems to be fairly superfluous in a story which doesn’t use this kind of technique from start to end so, yeah, a strange one.

The fight choreography is similar to the bizarre shenanigans when Godzilla fought the giant crab monster Ebirah in the previous film but, this time, the emphasis is on trying to put Minilla in comic situations where he gets inadvertently bumped for his troubles or, a lot of the time, is trapped by his enemies and has to call out for his poppa to come and help. For example, when Godzilla throws a rock at two mantis creatures they catch it, batting it back and forth between each other before launching it in Godzilla’s general direction, only for it to hit Minilla on the head instead and send him comically falling backwards. It’s that kind of film but... no argument from me because, at least it’s a fun movie and sometimes the potency of a really good, broad entertainment is forgotten with ‘serious’ film makers.

That being said, the film doesn’t have much in terms of substance to it, as you can probably tell and, when it ends, with the island freezing in the snow after an experiment goes right, allowing the pesky humans to escape, it takes one of the characters to tell us that Godzilla and son will be fine, they’ll just go into hibernation for a bit. Not often that kind of reassurance was given for the monster characters in a lot of these movies and I’m surprised they didn’t decide to bring back the bizarre 'narrator of the moment' to tell us this instead.

But there you have it, not much more to say other than this is an immensely enjoyable film and Criterion’s Godzilla - The Showa Era set gives us a nice, Blu Ray transfer which is the best way to see the movie. By this time the writers seem to have run out of ideas but some of the more interesting (and even more fun) Showa Era films were still to come.