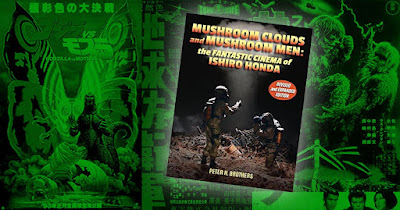 Fungi With The Kaiju Eye

I’ve been wanting to acquire and read a copy of Peter H. Brothers’ book Mushroom Clouds and Mushroom Men - The Fantastic Cinema of Ishiro Honda for quite a while now and I’m kinda glad I held off for so long because the one I was gifted by a very special friend on my birthday proudly states on its cover that it’s a “Revised and Expanded Edition” so, yeah, I’m glad I didn’t have a prior copy from before this new edition was launched.

Now, I have to say that overall it’s a really great book and really held up to my expectations in most departments but there are also a couple of criticisms I could level at it too and, since they’re mostly minor and don’t affect my overall positive reception of the book, I’ll just get my main problem with it out of the way first so I can concentrate on the good stuff for the rest of the review.

Which is... it’s full of typos and I don’t know why. Especially since it’s a revised and expanded edition. It feels like nobody actually bothered to proofread this because, frankly, it’s over 400 pages long (and it’s coffee table tome sized with very few pictures) and so, in all this density of very welcome text, there are maybe 3 to 4 typos per double paged spread once it gets going. At least, that’s the way it seemed to me but that’s my only real glaring problem with it and the rest is all good.

My only other slight concern was that it turns out that it doesn’t actually cover all of the films that Ishiro Honda directed. Which I thought was a puzzling omission until I started reading it and realised just how much in depth research and coverage there is here on the films that are included. I’ll side with the author on this one in that, the book is a bit of a doorstop as it is and to try and cover all of Honda’s creative output in the same fashion as what’s been done here would have been... well... an almost impractical task. And, as I read further, I have to say I appreciated and applauded the author’s decision to limit himself to just the horror, fantasy and science-fiction films of Ishiro Honda.

So in the opening of the book, Brothers talks a little bit about Honda’s movie making colleagues and friends. So people like the producer Tomoyuki Tanaka, the special effects wizard Eiji Tsuburaya (I read a good book about him many years ago) and also his great friend Akira Kurosawa, who regular readers of this blog will know is my favourite director. After Honda found himself retired from directing after his last picture, Terror Of MechaGodzilla, Kurosawa would often employ him as his assistant director on his films in their twilight years and even, on occasion, during their early careers (Honda was also assistant director on Kurosawa’s wonderful Stray Dog, for example). Apparently, Honda had a late start graduating to directing features because of his career in the war but, it turns out that Kurosawa was also a good friend to Honda’s wife when her husband was on one of his many tours of duty for the Japanese military in the 1940s.

The writer also says some interesting things about Honda’s signature style of directing including something I’d never really thought of before but which rings absolutely true now I reflect on the many movies I’ve seen by this director... that they don’t focus primarily on one heroic character and, instead, they always come across more as ensemble pieces with a number of important characters all getting their own screen time. In the second section here, the writer fills us in on Honda’s life both before and also after the films under the spotlight in this tome, leading up to the point where the book splits up into several more chapters, each split into mini sections highlighting each of the director’s fantasy films in more detail. Much more detail, as it turns out.

So starting with Godzilla, we get the origins of the character as an attempt to cash in on the success of The Beast From 20,000 Fathoms (which in itself was a late cash in on the original King Kong) and with Honda coming on board after another director refused the assignment, retooling it to align with his world view and becoming a reflection on the perils of nuclear power (inspired by the Lucky Dragon 5 fishing boat incident still very much in the Japanese consciousness) and, of course, accidentally kick-starting the kaiju eiga cycle in Japan. And each film is looked at in detail with each long section going roughly to the same formula. Brothers starts off with a brief overview of the film and also a summary, then he’ll talk a little about the cinematography, then he’ll go into all the effects work done on the picture, and then he’ll go into a detailed account of the score on each film (a great many of these were scored by the great Akira Ifukube, of course), then he’ll talk about the various actors and how they perform in their roles in the movie and then he’ll talk about the critical and box office reception of each film, sometimes bringing in the various incidents and elements which would lead to the next assignment in Honda’s string of fantastic cinema.

And, of course, he’ll highlight how Honda’s style and approach would both change and sometimes adhere to his original ideas over the years, not to mention telling some great stories that I’d never heard of before (or forgotten) along the way. Such as the incident during the shooting of Godzilla when the guy in the suit got electrocuted in a water tank and had to be giving resuscitation in order to get his heart beating again. And again when the suit actor drowned on King Kong Vs Godzilla and had to similarly be brought back to life. Or the time when Ifukube felt betrayed and angered by Honda for cow-towing to producer pressure and moving the placement of a musical cue where he didn’t want it on Godzilla Vs Mothra. He’ll also highlight any problems Honda might have had with various actors and actresses over the years and there are some interesting incidents, both good and bad, with some of the American stars he got to be in his films to sell them overseas over the years... so you’ll get a little insight into people like Rhodes Reason, Nick Adams, Russ Tamblyn and Joseph Cotton as the volume progresses.

And, overall, yeah... great book. This must have been an exhausting one to write and put together and you can see that a huge amount of research has gone into this one. I’m really pleased to have had the opportunity to finally read Mushroom Clouds and Mushroom Men - The Fantastic Cinema Of Ishiro Honda and I would wholeheartedly recommend this to fans and followers of either the director or the kinds of Japanese fantasy films of which Honda was one of the absolute masters (and arguably the originator of... at least in terms of the proliferation of kaiju eiga which came after his first go round). If you like these kinds of movies then do yourself a favour and give this one a read... very illuminating and entertaining, to boot.