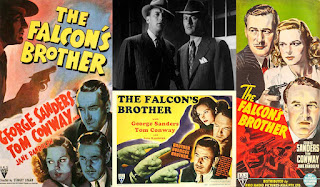 Birds Of A Feather

Even though I remembered almost nothing about The Falcon's Brother (it turns out), this one made a bit of an impression of me when I first saw it on television on BBC 2 in my early teens, back in the early 1980s. Apparently it made a big impression on the box office figures too, ensuring the series of Falcon movies, based on the character by Michael Arlen, would continue to run for a while. I’ve been trying to find a trailer online for this movie to see if the audiences had any inkling of what was going to hit them in this one but I couldn’t find anything. However, I’m pretty sure that they probably didn’t see this one coming when it came out the gate running.

So the film starts off with George Sanders in his, by now, established role as Gay Lawrence, aka The Falcon. But that’s almost the only thing which has stuck from the previous three films. Everything is different. For starters, he has a new sidekick in this one. Filling in for the previous guy, we have Don Barclay as Lefty, a very short guy but basically he’s the same character in tone and dialogue as Goldy from the previous films. He also has the legendary Keye Luke as his housekeeper, who does a nice bit where, if anyone calls who he thinks The Falcon doesn’t want to talk to, he switches into ‘velly solly’ pigeon English before, once the phone is hung up, switching back to fluent English American. There’s even a nice, oblique reference in the script to his ‘number one son’ status in the Charlie Chan films.

Second big change is, The Falcon has no fiance in this one. Wendy Barrie is nowhere in sight and is not mentioned. There’s absolutely no girlfriend in this at all although, somehow, the fashion reporter in this, played by Jane Randolph, is still serving as the person who is jealous of the main character’s flirtations with the opposite sex. Except, well, after 20 mins or so, The Falcon is not the main protagonist of the movie.

Thirdly, although Edward Gargan is still in place as the Chief Inspector’s sidekick, the inspector is a different character and actor... Cliff Clark as Inspector Donovan. That being said, he serves exactly the same purpose as the previous Inspector from the first three movies and the two characters even have the same pattern of dialogue exchanges, where Clark will give an order, Gargan will question it and then Clark will remind him he’s the Inspector.

Fourthly, the film is no longer under the musical helm of Paul Sawtell like the previous three but, instead, it’s Roy Webb on scoring duties (who had provided music for some of The Saint movies and also, of course, Cat People... in which Tom Conway has a role... more from Conway in a minute).

And this film covers a lot of bases for what is the 1942 equivalent of a ‘pass the torch’ movie at just a few minutes over an hour long. The film starts off with George Sanders meeting his brother on a ship which has just arrived in town. Except, when he arrives the police are already investigating the apparent suicide of his brother. Spoiler warning... it’s a) not a suicide and b) not actually The Falcon’s brother Tom Lawrence, although Gay Lawrence does nothing to contradict the notion of the police that the corpse is his relation.

Then, a little later while investigating the incident himself, he becomes embroiled in more murder and, just when he meets his brother, played by George Sander’s real life brother Tom Conway, he gets run over by a car and effectively rendered unconscious for most of the rest of the film. Sanders is excellent in this and spends the first 20 minutes or so chasing after women while attempting to solve the crime in the most comical manner possible. However, once unconscious it’s up to his brother Tom (the name of his real brother and, of course, the name of his character’s brother) to pick up where he left off and solve the plot.

This is 1942 and there are a few reminders of the recent US intervention into the Second World War. There’s a comical ‘fake black out’ scene during the start, as Lefty tries to help Gay escape from being discovered by the police and then, when Tom Lawrence continues the investigation with Lefty himself, the whole thing becomes about a fashion photographer who is using the covers of a fashion magazine to send coded messages to nazi agents in the US, with the prime example being the discovery of a cover which ties into the attack on Pearl Harbour.

Okay, so this is where The Falcon's Brother picks up some bizarre synergy (as if the lead character’s brother being played by the actor’s real brother wasn’t enough). Gay Lawrence finally regains consciousness and joins in with the mystery about ten minutes before the end of the movie. While Tom is tied up by the nazi’s, he manages to ring the bell in the church tower from which a sniper is waiting to kill a very important political figure. Gay, alerted by the bell, figures out the warning and rushes to throw the VIP out of the path of the bullet... only to be killed by the sniper’s shot in his stead. So, yeah, the main hero of The Falcon movies was shot dead just before the end of the film because, frankly, George Sanders had already got tired of the role so he got his brother involved instead. Conway is good in this but, understandably, isn’t as polished as a lead in this one, sharing screen time with his brother.

Now, you might think that this would be the end of The Falcon series but, due to a scene at the end where the nazis warn Tom Lawrence to get out of town or the same thing which happened to his brother will happen to him... Lawrence decides to stay and become the new version of... you guessed it, The Falcon. And quite successfully too, as it turns out, because he would play that role for the final nine films in the series. Which I’ll hopefully get to very soon. If you keep reading, I’ll keep watching.