Curse Of The Vampires 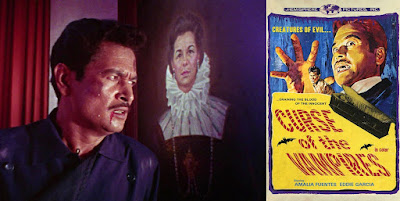 Vamp About
The House

Warning: Big story spoilers here...
if you’re worried about that kind of thing.

Curse Of The Vampires, aka Blood Of The Vampires, is a movie that, while it’s supposed to be set in Mexico, is actually shot in the Philippines and is one of many films in which the company Hemisphere partnered up with Samuel M. Sherman and Al Adamson’s IIP (Independent International Pictures). Indeed, for the same people, Al Adamson directed a movie especially made to look like a Filipino movie which played on double bills with this film, which was Brain Of Blood (reviewed here).

Curse Of The Vampires is a simple story. Leonore and Daniel, played by Amalia Fuentes and Romeo Vasquez, are lovers. They want to get married but Leonore’s father forbids it. He is also in very poor health and when he is discussing his will, his son (Leonore’s brother) Eduardo, played by Eddie Garcia, overhears that he has changed it so that when he dies, the big mansion house he and his family live in should be burned down to the foundations. When the distressed Eduardo enquires about this, we learn the father’s secret and the reason why he worries about his daughter marrying anyone...

The father takes Eduardo through his ’special secret door’ behind a big painting of his dead wife. In the dungeon below, his wife has turned into a vampire, who sleeps in her coffin at  night. By day she tries to fulfil her blood lust, which is why the father and his faithful man-servant, one of many servants in the house who are Filipinos made up in black face, keep her chained up for her own good. He doesn’t want his daughter to marry because he assumes she will inherit the curse of vampirism. When his daughter also discovers this, she understands why she should stop seeing Daniel, who seems to stand around a lot of the time in the film just brooding and scowling at people.

Now, the inevitable happens and the mother gets free a couple of times. Eduardo is bitten by her and turned into a vampire (unknown, as yet, to the father). She nearly bites her daughter when she is asleep but, as in the traditional vampiric tales, she is afraid of the cross that Leonore wears around her neck. However, she gets loose and the father and man servant have no option but to destroy her. The manservant grabs a huge fencepost and stakes her with it (off shot but we then see this blooming, oversized fence post with the girth of about three arms sticking out of her in the next shot), before they burn her. The film is, given the pedigree of the director and some of his future films, quite bloodless, for the most part.

Eduardo, in his new vampire ways... rapes, vampires up and then marries Daniel’s sister. When his father realises he is a vampire, the shock is too much for him and his heart gives out. Daniel decides it is a good idea to kill Eduardo and gets in a fist fight with him but is held back by Leonore. A short time later, Eduardo sabotages the coach and horses that Daniel and Leonore decide to elope together in. It goes crashing over a cliff and Daniel dies from his injuries. Leonore survives and calls to Daniel, who comes to her aid a couple of times as a spirit before Leonore too is vamped up... along with almost the entire household of servants. He even gets into a sword fight with Eduardo and he definitely has the advantage because, being a ghost, he can teleport himself around the room. However, Daniel’s ghost stakes Leonore with a candlestick, freeing her from her curse. They both meet in the shadowy realm of the afterlife to be together again, while the villagers burn down the mansion and all the vampires in it.

And it’s a surprisingly watchable movie. And, like a couple of other of this director’s films, shows a certain talent for making interesting pictures which hold the attention, even though nothing much happens in them. It feels dated, though. And I don’t mean dated for now but dated for the time it was released. It’s curious the way the film handles the material in the same kind of fashion an American director would have handled it in the 1930s. It seems a little hokey and overly simplistic for 1965. The musical score by Tito Arevalo is actually quite wonderful and I would buy a CD of it in a heartbeat if it ever had a commercial release (it won’t). It has to be said, it further pushes the film into the past as the score is typical of a monster movie made in the US in either the 1940s or 1950s. It’s kind of appropriate to the material but very big and bold and, yeah, just seems a little too energetic for horror films of the period. There’s also something which sounds a lot like a theremin on the score towards the end... another reason why I’d love a recording of this, to go with my other albums which feature that particular instrument.

The films is scanned and presented by Severin from what they say are the best materials. According to the IMDB (which I’ve found is often wrong about a lot of things anyway), the film is supposed to be in a 1.85:1 aspect ratio. The print here is in 4:3 but, looking at the trailer which IS presented in 1.85:1, everyone looks a little too in  your face and cropped in the cinematic release ratio. I’m pretty sure this must be an open matte transfer and, to be honest, I noted how good some of the compositions in the movie were for that ratio... so I wonder if the director knew it would be cropped down for a widescreen format and made allowances or not. I’ll probably never know, I guess but, I suspect it played in 4:3 in some cinemas too.

And that’s me done with Curse Of The Vampires (which also comes with a 20 minute featurette where Samuel M. Sherman discusses his relationship with Hemisphere). The dialogue is terrible and, yeah, some of the actors are pretty bad too. But it looks great and it held my interest for way longer than a film with this kind of sparse story content should be expected to do. So, yeah, the next film in this set is The Blood Drinkers from the year before, directed by the same guy. So I’m looking forward to that one.