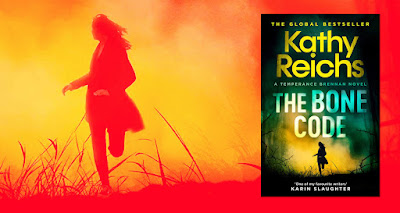 Warning: This one will have slight spoilers...

The Bone Code is the 20th of Kathy Reichs’ Temperance Brennan novels, not to be confused with her other character of the same name who is more ‘based on the writer in her early life’, in the hit TV series Bones. I’m not really into the TV show, as yet... the regular characters are all different, it seems to me and, the main one doesn’t quite seem like Tempe as written in the books to be honest. But, wow, have I really been reading these for that long? Not sure I’ve got all that much to say about the new one but, here goes...

Okay, so once again, Tempe is up to her neck in cases and this one involves two errands, one big and one small and, surprisingly, the smaller of the two... trying to find a woman's twin sister’s ancestor from her death mask... doesn’t quite hook up to her other, much bigger problem as you might have expected it to... well, not that you would expect it to in real life but there are usually a lot of connecting dots in these novels. However, I will say that the punchline reveal of that  side of the story, once the main action is done and everyone is recovering from the last act... is pretty cool. That one’s worth a ‘google’ when you know the answer.

Okay, so Tempe’s much bigger problem is a casket which washes ashore during a hurricane where she and her other half, ex-police officer turned private investigator Andrew Ryan, now live together (although these two still haven’t got married as yet). The casket contains the remains of two young women, one a mere child and this prompts the memory of a very similar case with many identical traits that she and Ryan worked 12 or so years before in another part of the country. As the action moves forward, there’s also a backdrop of a flesh eating virus suddenly breaking out near her area and, against all odds while the mystery starts to unravel, that backdrop element soon comes hurtling into the foreground as there may be a connection to the outbreak of a disease that humans shouldn’t even be able to transmit to each other... and the case that Tempe is working.

So, you know the drill with Reichs’ fastidious ‘bone pathologist’ (yeah, okay, or forensic anthropologist if you like) and she starts working all ends of both this case and the one from years ago, in her usual style and with lots of exclamations from Brennan, talking in first person directly to the reader, to foreshadow events and leave the reader wondering just what is about to ‘rock her world’ next. And yes, the same style of hooking the reader into mini cliff hangers... where a vital clue or link in the story drops right at the end of a chapter and all you read is the character’s reaction t it, making sure you jump straight into the next one where, after a little more teasing, the next break in the case or some such is finally revealed to her audience... is practiced throughout. I used to get upset at Reichs’ over use of this technique in her novels (although it certainly never made me put one down... quite the contrary) but over the years I’ve realised just what a master she is at combining hard facts about the highly professional world that both she and her main character have inhabited, mystery spinning, sharp humour and a shameless sensationalist, pulpy writing style which really shouldn’t fit so snuggly into that world.

In this one, Ryan is mostly off working his own cases and is absent for stretches of the book but he pitches in when he can. Also, there’s no appearance from her regular police person Skinny Slidell in this one... he doesn’t even get a mention. I don’t remember Reichs killing him off yet though but, Tempe has changed location so maybe the character is taking an extended rest for a while. In this, she has a new policewoman character called Vislosky who’s not quite as abrasive as Slidell and who, despite her abrupt and shuttered manner, does bond with Brennan more than they both thought and, due to certain events, has become part of her extended family by the end of the book. I’m sure we’ll be hearing more from her in future novels, for sure.

I’m glad to say that Covid 19 is admitted as an element of the book and it’s even used to highlight the ‘over kill’ reaction to the new outbreak of the other disease with the general public at large. I’ve been sick of writers and film makers ignoring the pandemic and so I was really pleased to at least see it acknowledged a few times in print here. So, yeah, I breezed through The Bone Code fairly quickly and it’s the usual attractive cocktail of thrilling mystery, very real danger and consequential injury to a few of the regular characters, Ryan’s amusing puns, Tempe’s trademark eye roll reactions and more of her very economically entertaining prose... “...the fog was thick enough to make snow angels.” It’s all pretty good stuff and I’m sure her regular readers, of whom I’m one, won’t be disappointed.