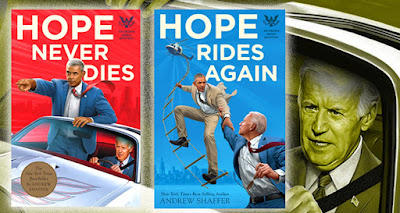 Anybody who knows me or who has read this blog for a substantial amount of time will know I know nothing about politics and don’t care for it one way or another. Whoever is in power is just as bad as the last lot it seems to me... with a little added caveat here acknowledging that the current UK government is perhaps the worst, stupid and possibly downright evil bunch we’ve ever had in this country. Same thing goes for US politics although, I have to say, I did have a soft spot for Obama... although I don’t know anything much about him, nor about his former vice president Joe Biden (outside the memes I saw on Twitter, once the Trump monster had been voted in). The point is, I wouldn’t know a Republican from whatever the opposing teams are called. Over here people refer to right wing and left wing but, honestly, I’ve got no idea what the difference is between the two and have never had enough interest in the subject to try and seek some understanding when people have tried to explain it to me, using other words equally shrouded in political mystery which seem completely useless unless you are in some kind of special club.

But I wanted to give a short shout out to a couple of books which I received for my birthday but which, actually, were already on my ‘to buy sometime soon’ list. Hope Never Dies and its sequel, Hope Rides Again, are two novels by Anthony Shaffer which tell, in much humourous detail, the fictional adventures of ex-President Barack Obama and ex-Vice President Joe Biden, after their terms in office came to a close. And they’re action packed, murder mysteries where the two, inadvertently find themselves trying to stay one step ahead of a bullet, while solving crimes together à la Scooby Doo. And who couldn’t resist a proposition like that, right? But, of course, given my previous paragraph, I have to warn the reader here that a good three quarters of the jokes probably went over my head. I have no point of reference for a lot of this stuff.

But the novels are kinda cool anyway and, certainly, a fun read. They are both told in first person by Joe Biden, in a kind of deliberately ham fisted, hard boiled inner monologue style. In the first one called Hope Never Dies, Amtrack Joe, as he’s often known, finds that one of his old conductor friends has been killed and left to be squished by an upcoming train... it’s up to him and his somewhat estranged, former friend Obama, to investigate when the police fail to realise just what’s going on. In the second book, Hope Rides Again, after Obama’s blackberry is stolen, a possible young suspect is shot up and recovering in hospital with a potential killer lurking in the background. Biden and Obama only have about a day to investigate the case before other commitments bring their time in Chicago, on the night before St. Patrick’s Day, to an end.

And it’s great stuff. I’m never quite sure, as I’m reading, whether it’s supposed to be pro or con Biden and Obama but it pitches up as something with its tongue stuck so firmly in its cheek you have to wonder when the blood will start flowing from the tasty organ’s awkward penetration. Biden is very much the main man of the narrative thrust and, obviously, the prose always follows him on his side of the adventures. Obama is very much depicted as ‘the cool president’ personae, with athletic qualities and brains to match. For example, when “An impossibly long speedboat entered the frame, cutting through the surf like a buttered bullet.”, Obama is depicted waterskiing behind. Biden on the other hand... well, Biden bends down in a field looking for a piece of evidence and his knee pops, causing him to flail around on his back like a stranded turtle.

The books are a joy to read, actually, with passages like... “That didn’t mean I wasn’t game for some Hardy Boys hijinx.” and, when the two are in disguise at one point and Obama corrects Biden about how they look saying, “We’re not dressed like idiots, we’re dressed like teenagers?”, Biden responds with, “There’s a difference?” And there’s a wonderful clichéd moment when Biden’s life is saved when a bullet hits the pocketed Medal Of Freedom which Obama gave him, instead of going through his heart.

There are some cool pop culture references throughout the stories too, concerning the ‘Democratic Duo’. For example, a moment where Obama uses his top secret information about what really happened at Roswell as a bargaining chip for the next lead from an informant. And, honestly, I had no idea the Americans knew who Tony The Tiger was and that they had Frosties over there but, yeah, the various references... they’re gr-r-r-reat! Perhaps my favourite joke, though, comes as a nice little nod to everyone’s favourite timelord, or more specifically his TARDIS. When Obama and Joe go to a speakeasy, they have to enter through an entrance in an imitation doorway of a British Police Telephone Box (which is what the TARDIS also appears as, due to a faulty ‘chameleon circuit’). As Joe goes in and down through this entrance he makes the comment to the reader... “It was bigger in the inside than it looked...”, which any follower of Doctor Who would know is, more or less what every companion says in some form or another when they enter the dimensionally transcendental space and time machine.

And that’s me just about done on Hope Never Dies and Hope Rides Again. A lot of Joe’s time in the second novel, set a few years ago, is about him trying to make up his mind whether he should run for office and, now he’s actually the president in real life, I’m guessing the writer may hold off on writing anymore in this series for now but... yeah, I kinda hope not. I found these books hugely entertaining and would love to read another. Definitely worth a look if you’re a fan of comedy mystery novels, for sure.