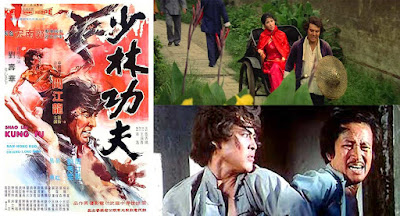 Well this is an interesting one from Kuo. I think this is possibly the earliest of the eight movies directed by him which are presented in Eureka’s Cinematic Vengeance box set and, it’s also one of the bleaker entries. On the surface, Shaolin Kung Fu is a tale about young Lin Fung, played by Chiang-Lung Wen, who earns his living as one of many rickshaw drivers in a small village to support him and his blind wife. However, a new, rival rickshaw company is taking away their trade by not playing fair and using bullying tactics to drive the underdogs out of business. Lin Fung, who also has two other female characters looking on him with admiration, in addition to his wife, has vowed to not fight after his wife was blinded and her father destroyed in a flashback sequence, by the vengeance of a violent kung fu grudge. Alas, when he sees first his uncle and then a young boy being beaten by the bad guy rickshaw drivers, he goes nuts, breaks his vow and violence begets violence until he reaches a final showdown with the rival boss.

Now, you could say this is a morality tale showing that violence and vengeance never pays but, no, it’s actually far bleaker than that. If Lin Fung does nothing then many lives are ruined, so he’s pretty much got to stand up and do something... as he’s clearly the most skilled kung fu fighter amongst the firm of ‘good guy rickshaw drivers’. So, it just spirals out of control with various people getting killed and, in turn, being sacrificed as each successive layer of bad guys, hierarchical leading up to the main villain of the piece (the owner of the ‘bad guy’ rickshaw drivers) is in his sights. On that journey, we are certainly shown how violence welcomes one dose of bad fortune after another, as all three lead females who were Lin Fung’s friends are killed due to his efforts to equalise the situation... to no avail. Impressively, his blind wife head butts herself to death rather than see Lin Fung get hurt... which obviously just leads to more conflict.

And this film really is an example of the best of both worlds, in terms of what I’ve seen by this director. I’ve seen a number of films where story takes a back seat to excellent kung fu sequences... to the point where the story is almost non-existent and confusing at best (I’m looking at you The 36 Deadly Styles... reviewed here) and I’ve seen films where he’s tried to inject a strong story element and spend time developing the characters and their relationships with each other, at the expense of totally losing any real interest in the spectacular fighting scenes which are the main draw for the target audience. Here, however, we have a very strong story and build up with characters peppered with just enough fight scenes, as the tension escalates, before finally kicking into high gear in the second half of the movie where, after the death of his wife, Lin Fung escapes a dungeon but then loses two more female friends before going on, as Beatrix Kiddo might put it, a roaring rampage of revenge.

The fight scenes are maybe not quite as sophisticated as in the director’s later pictures but they make up for it with lots of energy, astounding and unbelievable leaping and, in two instances, a demonstration of Lin Fung’s ability to stop the heart of his enemy by just jabbing it with his finger on the correct pressure point. So yeah, good stuff.

There’s some nice cinematography in various scenes, such as when the director will use internal window frames between rooms to frame an actor or use the verticals in a room to further compartmentalise and split the characters. Also, there’s a pretty good looking fight on various parts of a cliff which make for some interesting shots, where the opponents leap to and from various parts of the rocky cliff side. It’s almost enough to make me forget that certain sections of the movie are needle dropped with bits of Lalo Schifrin’s score to Enter The Dragon from the year before. Well, almost but, you know... not quite.

And that’s all I’ve got to say about Shaolin Kung Fu. It’s a nice movie which shows a final, hollow victory for the hero as he saves the reputation and business of his rickshaw company at the expense of losing his wife and two other admiring young women. Is it worth it for the hero of the film? Well probably not but it’s certainly fun to watch and a solid kung fu mini opus from director Kuo. Plus, you know, we get to see the fabulous finger of death move, too!