The House By The Cemetery 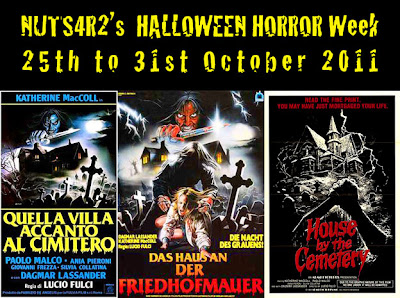 Grave New World
The House By The Cemetery
(aka Quella villa accanto al cimitero)
Italy 1981
Directed by Lucio Fulci
Arrow Region 2
So, for my third night of "A Week Of Halloween" reviews I watched Lucio Fulci’s The House By The Cemetery and, boy, was I disappointed with this one. I’ve always had a hit and miss kinda thing going on with Fulci but the memory of some of his films like the stylish Lizard In A Woman’s Skin always kept me coming back to him.
The House By The Cemetery is the third part of his “unofficial Gates Of Hell trilogy” but, honestly, I can’t see why. Although the first two “parts”, City Of The Living Dead and The Beyond, were both pretty much stand alone movies, they were at least connected by the fact that they dealt with a portal into hell... but The House By The Cemetery has no such portal into hell thing going for it... unless I missed a vital clue somewhere.
About the only thing I can see which is worthy enough of mention that the three films share... asides from the fact that they were all directed by Fulci, is the fact that English actress Katherine MacColl is in all three... although it has to be said that her roles are all completely different (in name if not in function) and this is probably her weakest role in a Fulci film... weak as in not having a particularly well written role or any real opportunity to do much with it. The previous two films were much better for her on screen presence I felt.
The House By The Cemetery tells the story of a man picking up another man’s research after he has killed himself. He moves with his wife and child to a house in the town where he needs to carry out said research (don’t ask me what research... I can’t remember or they didn’t actually say... either way it’s just a plot device). Meanwhile, his son has been having telepathic conversations with a young girl who keeps warning him away from the house where they move to. Good advice, it turns out, because the house they’ve picked out was once inhabited by the evil Dr. Freudstein who would lure people to the basement and kill them for his own, presumably demented, experiments. And guess what, as soon as our family turn up, just when they happen to be out of the house (for the first two thirds of the movie), Dr. Freudstein’s reanimated zombie corpse is up to his old tricks, gorily murdering any visitors to the house and storing them in the basement.
And so on.
And the film really doesn’t get much better than that.
And usually it doesn’t have to because Fulci could, when he was really on top of things, inject a certain flair and pizzazz to the proceedings which can lift even the cheesiest of plots and terrible examples of bad acting into a whole other area by infusing them with some surreal imagery and atmosphere.
Sadly... The House By The Cemetery doesn’t do this.
There was a nice bit where a shop window dummy’s head falls off and blood and gore spills out from the wound. However, the problem with using this kind of vision is he’s also used the same kind of dummys as stand-ins for the human characters when they get “gored up” (a technical term) in many instances and it just adds to the fakeness of the less than special effects in the movie. Nothing here is really that convincing. True, he used similar dummies for similar purposes in other films... the opening of Seven Notes In Noir springs to mind... but you tend to cut him some slack sometimes if the cuts are quick and the film is suitably gripping.
But, again, The House By The Cemetery is neither gripping nor stylish and my expectations here were that I’d at least get to watch something which was at the level of The Beyond or Zombi. Alas, I was very disappointed in this one and it’s not something I’d actively watch again. Why people hold this movie, out of Fulci’s not insubstantial portfolio, in such high regard is beyond me. My advice on this one would be to stick by the warning the little girl gives in the movie itself... “Don’t go in the house Bob. Don’t go in.”
Posted by NUTS4R2 at 20:21

Labels: Lucio Fulci, The House By The Cemetery