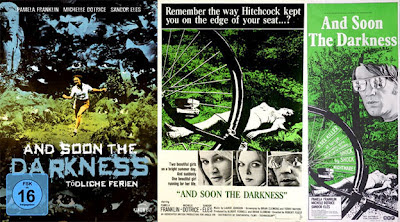 Hmmm... okay. I love director Robert Fuest’s adaptation of Michael Moorcock’s The Final Programme (reviewed here)... it’s one of my all-time favourite movies and I could watch it many times a year if I didn’t have such a tower of other movies to watch. But every time I see another movie he’s directed... well they always seem to leave me... not unimpressed, but certainly a little flat. I thought, with all the hype surrounding And Soon The Darkness on the “UK movies-in-a-pub” scene in the UK lately, that this would be the movie to reaffirm my, perhaps naive, belief that Robert Fuest is, in actual fact, an underrated directing God deserving of wider recognition. Alas, although this movie has little sparks of visual splendour hidden within its frames, I found this to be another slightly disappointing stab at movie making from Feust, although to be fair, I’m not sure whether I should be blaming him or the two writers.

I can see why Hollywoodland decided to remake this movie a few years ago. The storyline to this road movie (quite literally a “road” movie since a road is where the majority of the action is set) is pretty weak and obvious with vague pretensions to a whodunnit kind of twist that will fool exactly nobody for more than about 5 seconds... and therefore would reassure the younger teen audiences which comprise the majority of modern day cinemagoers that they are watching something which they are reasonably intelligent enough to comprehend. Perfect for a modern day/teen fodder blockbuster I would say. However, since this original version was shot for a 1970s audience, I’m afraid I can give the writers and director no such credit or justification in the weakness of the script. I was expecting a lot more from the two “giants of TV writing” who concocted this one... Brian Clemens and Terry Nation!

Now I’ve gone on record that storyline doesn’t matter much in cinema, and it doesn’t (otherwise this movie would be completely unwatchable)... but I do take an active dislike to stories which set themselves up to have a certain amount of intelligence and mystery at their heart and then turn out to have neither of those things. The story on this one tells of two teenage girls, Jane and Cathy, played by Pamela Franklin and Michele Dotrice (the second whom many would recognise as going on to play the put upon Betty to Michael Crawford’s Frank Spencer in the popular UK TV sitcom Some Mothers Do ‘Ave Em) who go on a cycling tour of the French countryside but, after an argument, then go their separate ways for a while as Jane leaves Cathy sunbathing next to a wood. When she returns to look for her, Cathy has gone missing. Something bad has happened to her and it’s probably that boy that’s been following the two girls since the last village they stopped at, right? Well no... and anyone who’s seen more than a handful of mysteries would recognise the obvious attempts at misdirection the writers/director engage in to make you think so.

Unfortunately for all concerned, especially the suffering audience, the real “killer” in this piece will be pretty obvious right from his first real appearance in the movie, about half way through. The script is written and clues are given in such a way that, once this character turns up, he really is the only person who will satisfy all the elements you know of “the previous murder from around these parts” and so it only remains for the audience to watch in stunned silence as the stupidity of the lead character bumbles her way around making things worse for herself... presumably cycling around the French countryside causes one to shed IQ points in direct proportion to the amount of pedal power you can muster, is my guess.

For all the weakness of the story, though, it has to be said that Fuest’s visual flair, when it begins to kick in (maybe he got more confident about certain scenes than others), almost makes up for the inadequacies of the storyline. Shots designed so that small heads can be seen amidst a density of texture and some, possible overuse, of differential focussing make some of the sequences stand out and I can only wonder what these compositions might have looked like on a full size cinema screen. Probably quite breathtaking in some scenes. And I’m guessing there were some issues during production so it’s not necessarily his fault as to the seemingly weak scripting. One of the characters Jane meets on her journey goes into great detail about the appearance of her house and it’s rough location... so I could be forgiven for thinking that this house would feature prominently at some point later when Jane is trying to get away from her potential killer. It doesn’t happen but it made me wonder, since the dialogue in that sequence turned out to be so detailed for something so superfluous when some of the other information was quite helpful, did a scene like that exist in the script at some point but then was jettisoned before filming was complete? I guess I’ll never know.

The music was mostly quite good but started off hitting a wrong note with me because the opening and end title music is so inappropriately banal and jaunty that you really wonder if you’ve accidentally found yourself watching a mid-seventies children’s show instead. The scoring on this one is handled by a composer who is best associated with TV shows like The Avengers, The New Avengers and The Professionals and once the title sequence is over with, it becomes a bit more interesting. The composer’s name is Laurie Johnson and I know he had a certain friendship with Hollywood legend Bernard Herrmann. He conducted a lot of Herrmann’s “own” re-recording of Psycho for the old Unicorn label release in the seventies uncredited when Herrmann found himself too frail to manage it all himself and you’ll find he is also the credited conductor for the old Unicorn re-recording of North By Northwest. He's also the guy they called in to score the sequel to It’s Alive, where he recycled lots of Herrmann’s own score to the first one for use in the second movie.

His score for And Soon The Darkness is actually quite similar to Herrmann's music in some ways. He uses short, repetitive motifs with soaring, bass brass punctuation in much the same way Herrmann might have if he’d been given the project. It’s not a score which has ever been commercially released (not even on one of Johnson’s compilations, to my knowledge) but it may be deserving of one. You can hardly blame the labels for not releasing it at the time, however, given the almost unlistenable quality of the title music on this one. The rest of the scoring is just fine though.

So, okay, this film is not a great movie by anyone’s standards in my humble opinion... but at least the camerawork and scoring are both above the average and give the film a certain lift which may help you forget about the script for a while. I can’t quite bring myself to recommend this one... it’s just not a remarkable movie... although it’s getting a bit of a revisionist reputation at the moment so, please, don’t take my word for it. But if you do feel the need to see this one... see it cheap, is my advice.
Posted by NUTS4R2 at 17:56

New comments are not allowed.