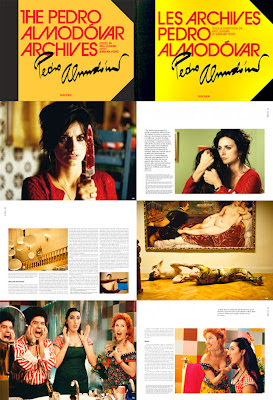 The Reign In Spain

This is the second most expensive book I’ve ever owned (next to Tim Lucas’ lectern crushing All The Colours Of The Dark book on Mario Bava) and it was bought for me by my girlfriend as a Christmas present and is, therefore, an extremely precious possession of mine... the sentimental circumstances of my ownership being far greater in value than the mere monetary cost could ever be.

The book is one of those impressively put together coffee table books that Taschen obviously take great pride in putting out, presumably catering for a market that consists of people prosperous enough to own giant sized coffee tables. This book is so heavy and voluminous (yes, it’s a voluminous volume) that they have even manufactured its own cardboard box clamshell packaging to house it, which kinda folds up into a carrying case (it’s a heavy piece). The book is a sheer delight to pore through with eyes wide open at the impressive amount of colour plates from every Almodovar movie made from his first feature film Pepi, Luci, Bom... right the way through to his recent movie The Skin I Live In. It even includes a strip of film from Volver in the frontispiece, which is a really nice thing to have for itself too.

The book is divided into quite long chapters (one chapter per movie) with each chapter being split up into subsections. Some of these chapters start off with a review of the movie by a leading film critic, the majority of which are contemporaneous to the release of that movie. The sections then go on with interviews (conducted by Almodovar himself) and various other examinations of the characters and story inspirations from the director. Yeah, that’s right. Almodovar interviews himself because he reckons he’s the only one qualified to ask the right questions of his work... I guess he’s got a point.

He’s a pretty good writer too. As I started to read this I remembered why I loved the majority of his films so much. It took me right back to my earliest encounter with his work in my mind. I remember going to the Lumiere cinema in London in 1990, driven up there late one Saturday night by one of my bestest friends we watched Tie Me Up, Tie Me Down and both loved the antics of the young Antonio Banderas (before the Americans had even heard of him) and the gorgeous and comical performance of Victoria Abril. After similar kinds of trips took me to see both High Heels and Kika on their release (Kika is very much an under-rated movie... I think it’s another masterpiece, personally) I was definitely hooked and started exploring his back catalogue whenever I could afford to on home video and TV broadcasts of such Almodovar classics as Women On The Verge Of A Nervous Breakdown. I now have all his movies on DVD, of course, barring his last one... The Skin I Live In... which I didn’t rate as much as some of his others (I’ll maybe rewatch it when it hits the HMV sales for £3).

Almodovar’s movies are very much a unique viewing experience within the convoluted history of cinema, of course. The way his curious sensibilities translate both his own ideas and those of other writers (Live Flesh, The Skin I Live In) are quite brightly coloured affairs and light up the screen with a vivid intensity of emotion that others would express very differently. His written word on the page is also like that and it’s even evident on the “pull quotes” that Taschen have lifted to layer the overall great graphic design of the book. Everything about this tome is reflective of the spirit of Almadovar and it’s truly a joy to read from start to finish (not a quick read either, with over 400 giant pages to pour through and gawp at). My favourite bit was the tired and exhaustive account of one of Almodovar’s trips to America, peaking with his acceptance of the best director Oscar (I don’t remember which picture, to be honest). His enthusiasm for meeting all these Hollywood stars and directors is not dampened by the occasional judgement of some of them... it’s like listening to a kid on a walkie talkie giving a running commentary of all the kinds of sweets they have in his favourite candy store.

Because of the constant personal touch of Almodovar’s candid writing style, The Pedro Almodovar Archives is a book you’re not going to want to put down in a hurry (and for goodness sake don’t drop it on your toe or you’ll be in trouble) and, as I said, the writing style is very reflective of the artist behind all those movies bearing the director’s “brand name” that you know and love. This is a truly excellent and, above all, appropriate celebration of Pedro Almodovar’s cinematic adventures and, as such, is something that I’m sure every Almodovar fan will enjoy. It’s an expensive tome, to be sure, but if you can find the spare cash and want to invest in a truly great tribute (if not entirely comprehensive, like a book written by an outside researcher might have been... but that would have given the book a much duller flavour) to a true master of Spanish cinema, then it’s worth scraping the cash together and giving this one a read. I had a really good time with this book and can thoroughly recommend it.

Labels: High Heels, Kika, Lumiere Cinema, Pedro Almodovar, Taschen, Tie Me Up Tie Me Down, Women On The Verge Of A Nervous Breakdown