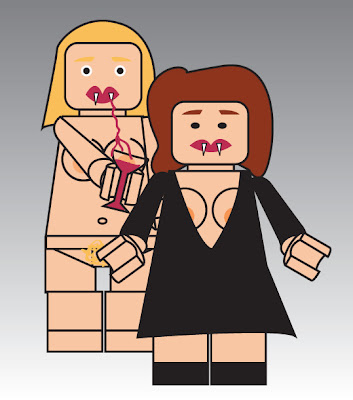 So after the interesting but, to my mind, mostly dull charms of Blood Of The Vampire (reviewed here), the second part of this particular Classic Horror Campaign  double bill was Vampyres (aka Daughters Of Dracula), which was much more to my taste but which also asks more questions than it answers in terms of the storyline.

Now I’d seen this movie years ago when a friend leant me the old VHS copy and I remember thinking... yeah, okay. Not terrible but not really a great film. But I couldn’t really remember it and my tastes have mellowed over the years. Also, if that tape was not in its original aspect ratio I would have probably “felt” the way it had been tampered with in terms of shot flow and design in a negative manner. I’m usually pretty sensitive to that kind of stuff.

This time around I really loved it but, while it is technically a British vampire movie, in that it was made with British money and is set and shot over here, I really wouldn’t go as far to count this as a British movie.

True, the acting in it is very "British", that is to say, the dialogue is very colloquial to our country while, at the same time, also being quite bad (in this case) and somewhat stilted in the acting style. Everything is delivered in a very proper but also very stiff manner which seems almost at an odds with the nature of the characters being portrayed. Why I say it’s not really a British movie is because of two reasons...

One is that the director, José Ramón Larraz, is Spanish... and one can see just by looking at the content of this movie that no British director would have turned this story in, in quite this manner (ironically, if the actors had been speaking Spanish and I’d been relying on subtitles, I probably wouldn’t have noticed the incredibly bad acting that goes on by the majority of the cast in this movie). The film deals with two female vampires who get picked up hitchhiking every night and lure their “good samaritans” back to their little stately home so they can have sex with them and kill them so they can drink their fill of life preserving blood (although that in itself is an impractical thing in that a fresh corpse a night would certainly have provoked more ballyhoo with the local police).

And that’s where my second point comes in. The film deals with two bisexual vampires who spend a lot of time naked and “getting it on” with both their victims and each other in fairly, for the time, graphic detail which most British directors then would have certainly shied away from. These are nothing less than “stylishly seventies” blood orgies... which are a bit of a rarity even now in this country (the film was somewhat cut on it’s initial cinema release and some of it’s subsequent home viewing editions over here) but the most interesting influence on this one must surely be that... well... I reckon the director may have been a bit of a Jean Rollin fan.

Jean Rollin, a French director, made badly acted, barely coherent but always sexy and surrealistically beautiful lesbian vampire movies. A lot of these are quite stunning, despite their obvious shortcomings in some areas, but one recurring piece of imagery which finds its way into a lot of Rollin’s movies (and literature) is that of always having two (sometimes twin) vampire girls/women who often drive the plot in some way. Now, to be fair, the two vampire girls are usually quite sweet an innocent in their outlook.... yeah, they can feast on peoples flesh, have loads of lesbian sex or practice sadistic tortures on each other, but for some reason they are always imbued with a certain sense of girlish naivete. Now Larraz doesn’t go that far in this movie... these vamps are definitely not, in any way, innocent... but he does take the theme of two vampire girls and puts them in a small scale setting where the action is always played out in a... well, let’s say cosy, space. This is no globe-trotting location movie like the large, visual orchestral symphony of a James Bond movie, for example. Like Jean Rollin’s own movies, this is a chamber concerto when it comes to the confines of its setting and, consequently, there’s not really a lot of variance over what goes on in the movie once the idea has been set up.

Once the visual ingredients are all laid out, the movie revels in its own “funky seventies” decadence for a while before coming to an abrupt end. Along the way there are some questions which hint at darker things but which never get answered. For instance, the movie starts with the two girls who become the vampires being shot to death mid-sexy romp by an unseen killer... but this in no way explains their vampire origins... or does it? The man who becomes their main and constant human snack bar throughout the course of the film (and surprisingly, he’s the only main human character who actually survives to the end of the movie) checks into a hotel in the area in which this film is set and one of the hotel clerks seems to recognise him from many years before... although the ages don’t match up. Hmmmm... are they setting this guy up to be the main vampire?

Well, the answer is... no. Not a bit of it. He seems just as confused as everybody else who ends up becoming bloody food for these female sexpots... which makes me wonder if there wasn’t a story change somewhere along the line and little moments which had already been shot to signify something else were just jettisoned later in the production as the story reshaped itself in to something else... due to either inventiveness, dried up funding or an inability to capture what was initially wanted. I guess I’ll never know if that’s what happened... but one of those things seems likely to me.

Not that this makes much difference. Vampyres is a really neat little “horror” film and, although the visual design and atmosphere are not a patch on what French lesbian vampire auteur Jean Rollin could create, this little movie certainly holds it’s own in the entertainment stakes and has a certain hypnotic spell all it’s own. I can imagine giving this one a spin when I’m next in need of a little mindless but sexy “vamping up”. Highly recommended for any fans of 70s euro-horror... and for fans of bare, heaving bosoms dripping with blood, of course.
Posted by NUTS4R2 at 19:25