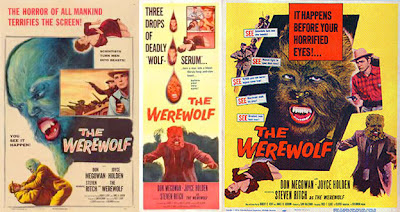 The Way We Werewolf


Warning: Big, hairy spoilers if you’re
that worried about it on a title like this.

So here we have the director of such “classics” as Earth Vs The Flying Saucers (it’s in my “to watch” pile people, be warned) and The Giant Claw (reviewed here) directing what is probably a not so classic... and not that fun either, B movie.

I’ve begun to get a little respect for these Sam Katzman produced B movies because, although they’re not always as entertaining in the “so bad they’re good” kinda vein in which I would prefer to be watching them, you have to give them some credit for taking the terrible scripts quite seriously. None of the actors are particularly good in this one and a lot of them are spouting some really terrible 50s nuclear paranoia clichés to boot (you will be saying the lines out loud before the actors get there themselves) but they all seem to be really trying hard to sell this improbable story and make it work. Which has got to be worth something.

Now you may think from the title of this little mini epic that it’s a classic werewolf tale in the Lon Chaney Jr as The Wolfman mould, as did I, but I was wrong. The only thing this bears any resemblance to in the typical Universal template is that The Werewolf in this one is actully quite a tragic figure, more so than Chaney’s Lawrence Talbot character, in fact, because he’s a complete innocent who has been made what he is by the less than sincere intentions of a couple of “questionable” doctor/scientists and he also has a wife and young son who he needs to be mindful of.

Yeah, that’s right, “evil scientists” have made him into a werewolf in this one, not a gypsy curse living on in the bite of another like previous incarnations of this pseudo-myth. In fact, I’m led to believe that this is the first ever, pseudo-science fiction explanation for a werewolf used as a plot point in the long history of werewolf cinema, as opposed to the superstitius wolfbite explanation... so if any of my readers can refute that and let me know about it, I’d be happy to hear from you. This movie is very “50s scientists are evil and meddling in things they don’t understand” in its preoccupations and, as a result, we don’t have any of the full moon stuff happening as a trigger in this one... which means, quite often, the werewolf transformations take place in broad daylight and it does its hunting where we can get a good look at the cheesy make-up (with added drooling saliva content in this one, it has to be said).

Actually, the make-up's not completely terrible. It’s a bit like the kid in The Munsters but with much lighter hair and, since the guy is wearing a crumpled suit throughout the movie, this is what the werewolf is wearing in all its scenes too (I guess it saves on make-up time and costs when only the face and hands have to be “wolfed up good” for his close-ups. Because of the clothing and also the general grey tone of the wolf make-up, the titular character much more resembles Henry Hull’s incarnation of a wolfman in the 1935 film Werewolf Of London (my favourite werewolf movie) than any of the other screen predecessors of this one.

The direction is pretty competent here, nothing to relly complain about... or laugh at. The opening shots where a troubled man walks towards camera while a “poor man’s Rod Serling” voice-over tells us about lycanthropy is actually quite atmospheric and effective to be fair... or at least it would be if that damned lethargic narrative would shut up.

This movie is also interesting in that the film is really not told from the point of view of the werewolf at all, but more from the point of view of the village sheriff and his team. The actor playing the sheriff looks quite a bit like Fred McMurray and so has strong, heroic features with which to deliver his terrible lines and add some conviction to them. Consequently, he spouts rubbish, but it’s rubbish with gravitas and so he’s fairly okay as a likeable but incredibly dumb hero figure. I understand the actor had previously played the burned up land version of the gill-man in The Creature Walks Among Us (the third and final part in the Universal Creature From The Black Lagoon series) and so he probably saw this as a step up from what he was used to... poor guy. He’s actually quite likeable and cuts a fine figure of authority... just a pity he wasn’t doing it for a more upscale production.

The film ends quite abruptly and also quite bitterly for a movie of this type. You won’t go away from this one thinking, “well the police did a good job here” and the movie jumps to the end caption almost too quickly, like they want you to forget the incredibly dark consequences for other characters which will occur from the conclusion you’ve just seen. This is not really a happy ending like you might have hoped for on this one folks... this one’s a bitter pill to swallow.

At the end of the day, I’m not sure if I could recommend this one to anyone except dyed-in-the-wool B-movie fans or those who like werewolf movies. Most people are going to be bored by this one, I suspect... I wasn’t but then again, I love B movies so it’s not a worry for me. Approach this werewolf cautiously and with a certain amount of experience in the field, is what I guess I’m saying. It’s not going to be everyone’s cup of tea.