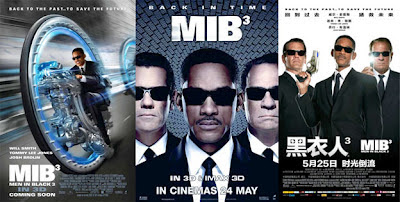 Men In Black 3 is not a roller-coaster ride of a movie.

Nor is it high octane, pulse pounding, thrilling adrenalin rush of a cinematic experience... and if that’s what you’re hoping for I think you may find yourself a little disappointed. And I think that may be the case with much of what the studio thinks is its target audience.

On the other hand, Men In Black 3 is exactly what I was hoping to get from another installment in the franchise...

Something with a little story and a warm heart rather than just a whole flying saucer load of mind-numbing set pieces fused together with a storyline tagged on around it. In other words... it’s a nice, pleasant time at the cinema and not a confusing one.

Now I loved the original Men In Black movie when it hit cinemas back in 1997. It had a darkness and a downside to it that gave the movie a certain amount of warm fuzziness while still being a nice bit of a sci-fi adventure yarn. I even watched it once again when it was released on video tape. Men In Black 2, however, was a whole different ball game. It was competent enough and had some nice bits in it but, ultimately, I felt like that one was just a load of set pieces shoved together and tied up with a bow. It wasn’t terrible, how could it be when Rosario Dawson was in it (she is hot!)? Ultimately though, it didn’t provide what I was looking for and I never was tempted enough to look at it again when it hit the home video market.

It’s been ten years since that misfire (I’m sorry, that’s just how I see the second one) but the trailer to MIB3 looked pretty good and I’m always a sucker for time travel stories so I decided to check this one out... besides, my mum loves Will Smith so it was a shoe in I’d have to take her along to it anyway. Like I had a choice.

As I said above, MIB3 has a solid storyline and some genuinely funny moments. The banter between the warm Agent J (Will Smith) and his dead-pan senior partner Agent K (Tommy Lee Jones) is all in fine form but after a major set piece or two at the start of the movie... yeah, okay, they put some major set pieces in, it’s not like they didn’t try to turn it into a roller coaster, they just didn’t succeed enough on that level to let it ruin the film okay? Anyway... as I was saying... after a major set piece or two at the start of the movie, Tommy Lee Jones goes missing in action. Quite literally missing. Missing from the present day time/space continuum, in fact, when a psychopathic alien (who reminded me a bit of Charlie Manson, it must be said) escapes from his lunar jail and goes back in time to the launch of the famous moon landing mission of 1969 at Cape Canavrel, killing Agent K and thus changing history. The only one who can remember K is Will Smith’s J... and with the world in peril from marauding alien invaders, J has to go back in time to 1969 to prevent the moon escapee, Boris The Animal, from killing Agent K and thus allowing the older Boris to succeed where he, in the past, failed.

And pretty much the rest of the movie’s short running time is spent with Agent J and a younger version of Agent K, played expertly by Josh Brolin in a performance which is a brilliant echo of Tommy Lee Jones own take on the role, as they do the whole “tracking down alien Men In Black” thing and we see some great moments in American history recreated to boot... including a nice series of moments in Andy Warhol’s factory (Andy Warhol, of course, turning out to be an undercover MIB). There were some nice little nods to the time and place the movie inhabits and I even, at one point, saw a blink and you’ll miss it cameo of a guy dressed up as a Metalunan Mutant from This Island Earth. That one really made me smile.

There’s some stuff towards the end of the movie when the two agents and their friend, who can see all the possible future events of the universe, are put in a situation when you realise there’s a good chance that nobody is going to get a very happy ending out of this one. You already know that the reason Agent K has looked miserable all these years is because of what happened the day that the movie is working itself up to and with both agents taking on a different version of Boris from two crossing time streams at once, the chances of them both surviving don’t look very good... and I’m happy to say that my best guess on this one was wrong. I expected this to be an exit for one of the characters, and not necessarily the one who it’s all set up to be the last exit for... so I was really glad that the movie wasn’t as obvious as I’d expected it to be in this area... although that outcome would have been a pretty bleak proposition. There’s also a bit I didn’t really understand with a little bump/bounceback in time happening with no apparent explanation... can anybody who’s seen the movie please explain that one to me?

I can, however, reveal one tiny thing without actually spoiling your viewing experience of the film. All I’m going to say is that Boris isn’t the only person who shares some simultaneous timeline with a younger version of himself... and I’ll leave it at that. You might have a suspicion from that but I’m guessing you’ll be wrong. There’s a nice little surprise before Agent J returns back to his own time stream. And when I say nice I mean the moment is tragic and dark and explains just why K is not the most cheerful person whenever we see him... and I really can’t say anymore. Suffice it to say that the movie is quite moving towards the end and gives a nice understanding of certain things that happened in the first movie... although I’m going to have to check that first movie again now to ensure that the third movie hasn’t created some glaringly new, timey-wimey continuity errors in the trilogy.

This film is well shot, well acted, has some nice visual effects, some gentle comedy, a villain you really won’t like too much... plus music by Danny Elfman riffing on his original baseline for the series, so what’s not to like on that “score”? It’s not a perfect movie, by any means. I would have liked to see more of Tommy Lee Jones in the movie, since he gets kind of jettisoned from the film about 20 - 30 minutes of the way in and then only comes back for about a minute or two at the end... that was a shame... but it’s not about the cast it’s about the overall effect and Men In Black 3 is a nice, respectful companion piece to the previous two movies and certainly doesn’t let the high standard set in the first one drop any. The 3D in this one wasn’t nearly as distracting either, I would say. Completely pointless and unnecessary, of course, specifically because of that reason... but not distracting.

If Men In Black is your thing then you shouldn’t find yourself disappointed by the third installment... it’s a really solid piece of movie making. Go see it.