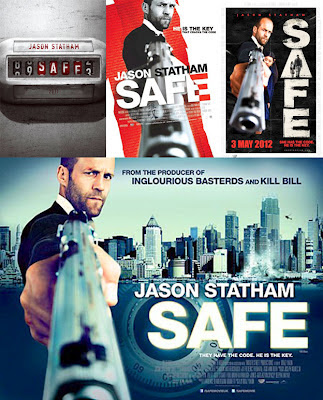 Safe is another in the series of in-yer-face action thrillers which have successfully, and deservedly, turned Jason Statham into a household name. Those of you, however, who are expecting the over-the-top silliness of The Transporter and Crank movies blended in with the high octane car chases and blisteringly unsurvivable body hits kind of action these characters shrug off so lightly may be best advised to alter their expectations.

Yeah, of course it’s over the top. The majority of action movies are. There’s no way anybody would be able to survive stunts and action like this in real life... but it hasn’t got that way-beyond-reality sense of humour that often accompanies a Jason Statham vehicle. Statham himself is, of course, as charming as he always is in these things... but you won’t find him stripping himself topless and covering himself in black oil so people can’t grab onto him in a fight... nor will you see him kick a gun up out of a man’s hand and then kill a gazillion people with his breathless martial arts skills and do three somersaults in the time it takes for the gun to fall back down so he can catch it and shoot somebody else.

To be sure, he does do quite a lot of kicking, punching and jumping in this one... but the stupidity of the action choreography has been pared back quite a bit in this case so the audience don’t have to suspend their collective disbelief quite so much. The action sequences all still pack a fair amount of wallop though and action-fest fans won’t regret taking a look at this one.

Like I said, however, the humour is mostly eradicated in this movie...

The set up starts with a point when Statham is just about to come into contact with the little girl he spends the rest of the movie protecting. We then get a series of reverse flashbacks like somebody is cinematically opening a stack of Russian Dolls. Each of the two character’s back stories are revealed and they’re both extremely dark for this kind of seemingly light-hearted Hollywood fare. For example, Statham’s wife and unborn child are brutally murdered and he is forced to live his life with no money and no friends for a year before the little girl inadvertently stops him from taking his own life and gives him a sense of purpose to go and kick some ass. Luckily for them both, the ass-kicking involves “bad guys” from both his and her past, as rivals to the possession of a Safe combination memorised by the girl with her photographic memory and, also, the police (who also have reason to hate Statham’s character)... and, of course, Statham gets to go at it like an avenging angel to kill the evil antagonists from his past as he redeems himself by becoming a guardian to the child who everybody wants to either extract the information from or kill.

The plot is that simple... but appears complex, at first, because of the initial narrative structure... which then packs the Russian dolls of the cinematic flashback  back up into the right order before the action kicks off properly. This must take a good 20 minutes of running time and it’s unusually dense in detail for a modern action movie but certainly does no harm to the basic entertainment value of the piece and helps give a focussed motivation for the characters.

Statham is ably supported by a really excellent cast including some heavyweight character actors such as Blade Runner’s James Hong and the always excellent Robert John Burke (as he’s billed here) who was so great in the Hal Hartley movies The Unbelievable Truth, Simple Men, Flirt and No Such Thing... not to mention Dust Devil (and possibly his action credentials playing the title character in Robocop 3). Everybody is really excellent in this film and, because everyone is so credible in it, it allows the director to deftly pad some of the bone crunching, bullet play sequences with a matter-of-fact layer of pseudo-truth which is of immense help when carrying off some of the more unbelievable set pieces... as I said before, most people wouldn’t be able to just walk away from the kind of physical punishment depicted in these kinds of stories.

Also... the action sequences are, for the most part, not as badly edited as a lot of these kinds of sequences have been in the balletic world of modern action cinema. A distinct lack of confusing juxtapositions means that I can tell just who is shooting or punching who, who is being kicked or chopped and the rough geographic location of these shots (although there was a little sleight of hand practiced in a sequence where Statham has to throw someone out of a car where the shots didn’t quite match up... luckily, they’ve cunningly distracted or softened this with an “outraged” sound edit which implies a visual link where the visual continuity has failed... I’ll let ‘em get away with it because action movies are so hard to shoot and edit).

If you like modern day action movies and don’t mind them infused with a certain amount of dark and, in the case of a lot of the characters in this one, a more ambiguous moral sensibility, then you’ll probably enjoy this movie for what it is. It’s not the best of Statham’s action movies by a long chalk, but it’s certainly not the worst and the pounding, driving rhythm of the movie will probably pull you in and take you on the kind of ride you might like. It won’t be to everyone’s taste but there are a lot worse action entertainments out there and this one has a certain heart to it (something which Statham always delivers) and a certain honesty to it which won’t leave you feeling the movie lacks a solid base. Give it a go. This one’s pretty Safe!