Doctor Who: The Invisible Enemy 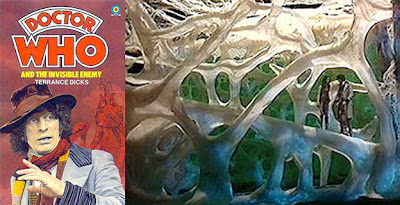 All of us kids were Star Wars’d up, you see?

That is to say, the average younger viewer of Doctor Who back in 1979 was pretty much still primarily discussing the first installment of The Mighty Lucas’ epic sci-fi serial at the time... and many people ended up riding the Star Wars bandwagon. Some people used the opportunity of the public’s obsession with all things “space opera” to resurrect and fund projects which might not otherwise have been green lit in the past, such as Luigi Cozzi’s "Sinbad in space" variant Star Crash or the first of the Star Trek films... while others found themselves having to temporarily scrap planned projects in order to retool their next movie into something with some “full-on” space and laser gun action, such as the Bond film Moonraker, usurping the planned “adaptation” of For Your Eyes Only and putting it on ice for a little longer. The box office clout of Star Wars could not be ignored by the various studios who produced their own attempts at similar space n’ action oriented films such as The Black Hole, The Humanoid, Battlestar Galactica, Battle Beyond The Stars and so on. Everybody was looking at trying to get similar plot elements into their own movies... and the kids all loved it.

Now don’t get me wrong... I’m not (outright) saying that the invention of the robotic dog K9 was a direct result of the droid R2D2 in Star Wars. I understand that the idea to have him become a new companion (aka robotic sidekick) in the show was not decided upon until quite late in the day... but I really think there must have been some of that kind of thinking going on with his creation somewhere down the line.

The Invisible Enemy, starring Tom Baker as The Doctor and Louise Jameson as his primitive assistant/companion Leela, is a story which seems very caught up in the time of the upsurge in science fiction of heroics with laser guns, having already recently seen off a direct competitor scheduled by ITV to battle The Doctor in his very own timeslot (that’d be Space 1999) and now responding to the changing playing field of big budgeted sci-fi movies. Perhaps that’s why there seem to be a fair few “ray gun” style battles in Doctor Who around this time... this four part story being no exception.

However, Bob Baker and David Martin’s script for the story shows not just the influence of the Star Wars crowd in its make-up and, to be fair, the trappings injected into the story to compete at some level with what the younger segment of the audience had come to expect from their recent cinema trips are, after all, only trappings. Laser guns and robotic companions are merely set dressing which can be added or subtracted after the fact to pretty much any story written for the show. What’s also apparent is that the story also shows the tremendous influence of the movie Fantastic Voyage. Written by Jerome Bixby & Otto Klement for the movie and not, as is commonly believed, by Isaac Asimov who actually only wrote a novelisation from the script, which was released a fair bit before the movie premiered... Fantastic Voyage tells the story in which a nuclear submarine crewed by a team of scientists is miniaturised to roam the insides of a patient and clear his blood clot by blasting it with a laser beam (if memory serves).

This Doctor Who story, in particular, suffers from the fact that, although it’s quite intelligent in premise, it’s padded out with a lot of unnecessary fighting and action which is fairly badly choreographed (I mean, I like to see a scantily clad Louise Jameson tumbling about on the floor shooting at people in the hopes that her cleavage won’t always defy physics as much as the next person... but it gets tiresome after a while) and the special effects, while good in a few spots, are mostly quite terrible it has to be said. Normally I wouldn’t expect this to detract from the writing, but it kinda does on this one. I think this story would have been much better served cutting it down to a three parter but there weren’t that many three parters made in the history of the show.

People taken over/infected by an alien virus called the Nucleus battle against the uninfected for control of a facility to breed their swarm of alien creatures and take over the universe. After infecting The Doctor it’s up to Leela, Professor Marius and the good professor’s faithful robot dog, K9, to distract the Nucleuses telepathically linked subordinates while miniaturised clones of The Doctor and Leela are inserted into the brain and walk around The Doctor’s head to eject the alien creature. They do this but the Nucleus uses their escape route (through The Doctor’s tear duct) and so the last episode becomes about even more gun battles as The Doctor and Leela try to blow up the alien and assorted bad guys. At the end of the story, Professor Marius is all set to return to earth but worries about taking his invention, K9, with him so he asks The Doctor to allow K9 to accompany them on their travels... something many a regular Doctor Who actor and film crew would regret over the years. It’s said that an actor should never work with animals and children and K9 proved that the old adage could also be extended to mechanical creatures... since he hardly ever worked and usually screwed up 9 out of 10 takes, by all accounts. Stories that Tom Baker kicked him clear across the set at least once can be well believed, I think.

The Invisible Enemy is not unpleasant to watch but, if truth be told, it is quite dull on the whole. Despite the good chemistry between Baker and Jameson, this particular story doesn’t seem to have the charm of the Pertwee years about it and, while entertaining in places, it’s not something I would call a fun watch and it’s not one I would have normally chosen to part money with to visit again, had it not made up part of the boxed edition of K9 Tales which housed the K9 And Company TV spin off I wanted to revisit. If you’re not used to Doctor Who from this specific period and want to see a good story with both The Doctor and Leela in it, I think I’d have to recommend something like The Talons Of Weng Chiang as a better starting place than this. This one, I feel, is more for completists only... which is something I am not.