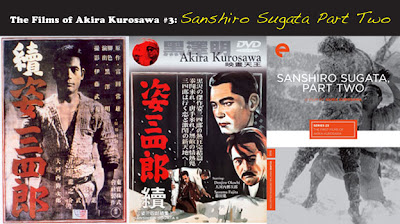 I was getting all ready to write the lead in to this review and I quickly looked on the IMDB to see if there was anything extra important I should know about it which I wasn’t going to cover, when I saw a review which really panned this movie, saying that Kurosawa’s heart wasn’t in it etc. It’s true, I would say, that Kurosawa’s heart wasn’t really in this, but I would have to say that this doesn’t stop this movie being another absolute masterpiece from an absolute “directing emperor” and I’ll highlight some of the reasons why I believe that as I go through.

It did make me angry though!

Okay, so my favourite director made this sequel only two years after his directorial debut with the first movie Sanshiro Sugata (reviewed here), which he had followed up with a wartime propaganda film called The Most Beautiful (reviewed here). It was here that Kurosawa, in his capacity as a director, first became the victim of his own popularity. Sanshiro Sugata was so successful, you see, that the studio practically forced Kurosawa to write and direct a sequel to the movie... something he would do only twice in is career, both times under studio pressure because his original movie scored hugely at the box office (the other sequel he made was Sanjuro, the sequel to his popular film Yojimbo).

And so he reassembled the cast of his original movie and went at it, perhaps a little less enthusiastically but no less diligently (I believe) than he did with any other of his films. There are possible flaws here, in that the action jumps around a little, but that could just be Kurosawa experimenting with a format that cut needless explanatory dialogue from the movie... and it’s not like anything is any less understandable or worse off for it. It’s a tad jarring in a couple of the transitions but, then again, it might be the effect he wanted to achieve.

The film is a double storyline, which leads up to two fight scenes which again show the simplistic, child-like intellect of the title character gaining a little wisdom and expansion while at the same time focusing on the purity of his naive point of view, which often leads him to the truth of the matter. One fight is the culmination of a set up in which Sanshiro is offered money to represent Japan against America in a fight to demonstrate that martial arts (such as Sanshiro’s expertise with Judo) are a match for the “art” of American boxing, by pitting him against a boxer in the ring for money and to profit the promoters. It’s a show match, purely for commercial reasons, and he wants no part of it.

The second storyline is of the two brothers of the man that Sanshiro fights at the end of the first movie, who want their revenge on him. The original character has been made very ill by the fighting and is dying. He comes to make his peace with Sanshiro but also warns him about his two, crazy, vengeance-hearted next of kin. In a brilliant piece of casting on Kurosawa’s part, the original actor playing this character also plays one of his two brothers in different make-up... something I didn’t even realise the first time I saw this movie at the cinema some ten years or more ago.

The set up to the first storyline is a classic piece of tension-and-release pre-action cinema staging and, considering the context of when this movie came out, is something which must have been really electrifying to the audiences on its initial release. Because an American Navy man is so tall and heavy, a rickshaw driver, on stopping, accidentally tips him out of the rickshaw... for which he begins to receive a beating by the brawnier US bully. After hitting and tossing him around a bit, the sailor brings his arm right back for another killer blow... when Kurosawa cuts to a close up of the same hand being grabbed from behind. Enter Sanshiro Sugata, who rescues the grateful Rickshaw driver by “taking care” of the bully and throwing him “in the drink”, so to speak. This unfortunate occurrence is what gets the Americans to notice the Japanese fighting style in the first place and so this incident is what sets off the US VS Japan theme of the plot. And, of course, it’s brilliantly staged by Kurosawa.

That “catching of the hand” shot has been used many times since and, due to the sheer inventiveness of silent movies, I’m guessing it had been used many times before this movie was made, but it’s a real interesting usage of something which has echoed down the years and which still keeps us watching this similar kind of dynamic interaction to the present day. Just think of the “entrance” of Jay and Silent Bob about 20 minutes into Kevin Smith’s Dogma, for example. Linda Fiorentino is about to be pummelled to death by the three minor, skateboarding, hockey-stick armed demons from hell when all of a sudden, just at the last second... Jay and Silent Bob arrive and despatch the three demons in a blare of heroic fanfare music (courtesy of composer Howard Shore). Kurosawa was doing this stuff a long time before that... powerful stuff and one of many visual master strokes in this film.

Another piece of brilliance is when the young rickshaw driver who was rescued by Sanshiro, and who has been pestering him to take him on as a Judo pupil, finally gets his wish. Instead of showing an action packed montage of the pupil going through his training, as many directors might choose to do, the director has one sequence where Sanshiro throws him about a lot to test his resolve, followed by a riveting montage with the camera locked in one place which shows the man entering from screen left and sitting down to begin a lesson. The same 6 - 10 seconds is repeated, each shot dissolving into the next, to show the way the attitude and confidence of the man changes and grows just by his demeanour and body language over time, lesson by lesson, as he enters and sits down in various ways in each of these silent shots. A brilliant and simple alternative to the obvious choice, of which a variation was used in a similar “locked camera” sequence with Charlotte Rampling, by Woody Allen in his greatest masterpiece, Stardust Memories. The montage of her repeating a phrase in different states to show her mental deterioration is, I think, something of a spiritual cousin to this sequence from the Kurosawa film, just used to reach a different conclusion.

Another piece of brilliance in the film is the fight where a Jujitsu man (who has stepped in because Sanshiro initially refuses to partake in the ballyhoo and commercialism of a “show fight”) is knocked down in the ring. Sanshiro already has a conscience about this as he has talked to the man prior to the beginning of the fight and is accused of making Judo so popular as a martial art, due to his prowess and status as a kind of figurehead for it, that the Jujitsu crowd are forced to perform for money. As the beaten man lays on the floor, the visuals are all about the audience going wild, then Sanshiro’s reaction to the audience, then a shot of the downed man failing to get up and then back to the crowd etc., in a cyclic montage which really presses the emotion buttons and pushes the point that Sanshiro is disgusted by the whole charade. This may be an old trick now, but it’s expertly done here and it’s always worth seeing a master director building sympathies like this.

The entrance of the two brothers in Sanshiro’s dojo is also amazing. Once of them is “touched in the head” and completely crazy... playing it in a very “in your face” (quite literally at one point) fashion in much the way I would imagine Toshiro Mifune would have played the role... if he wasn’t already busy at the time, before he became an actor, teaching Kamikaze pilots how to win the war. Similarly, his brother, has a laugh which is unexpected and creeps out unexpectedly, just the way in which Mifune would do it for his crazy samurai role in Seven Samurai, years later. It broaches and interesting question... where did “the Kurosawa” end and “the Mifune” begin, in terms of Mifune’s amazing acting prowess.

The final fight scene in the snow, where one of the brothers takes on Sanshiro, seems like two silhouettes fighting against the white and is a minor set piece intended, I believe, to echo the fight in the field at the end of the first movie. But it’s really only a prelude to the scene which comes after where Sanshiro in his sleep, simply by smiling in the midst of a dream, prevents his own death at the hands of the crazier of the two brothers... who is also seen to have become a little more enlightened, or at least agreeable, due to the good example of the title character.

So my final conclusion on Sanshiro Sugata Part Two, contrary to the drab condemnation of it on the IMDB, is that Kurosawa has indeed, through both sheer technical inventiveness and the invocation of some superb performances by the principal cast, managed to rend yet another celluloid masterpiece. If you’re not familiar with the work of Kurosawa then I would say that this film isn’t the best jumping on point (you really have to see his debut feature first to get the most out of this one) but it’s certainly another rich vein of textbook cinema at its best and should, perhaps, be treated a little with the level reserved for any great masterpiece. If you’ve seen the first movie though... seriously take a look at this astonishing sequel before the opportunity is no longer there. If the Criterion edition of this is anything to go by... that ropey old print isn’t getting any better as the years roll on.