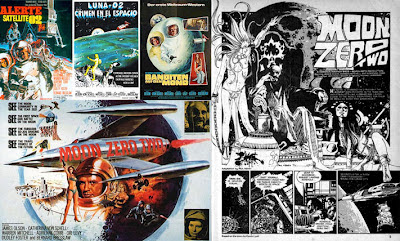 Woohoo! I still love this terrible, terrible movie. I think, next to the Quatermass remakes they did, it’s probably the greatest movie Hammer ever released. I’ve had a bit of a thing going for this one ever since I first watched the promise of the opening credits sequence evaporate into something... well... something “entirely unlike the opening credits sequence” when I was a kid.

Since it starts off with a jazzy, teeny bop pop song pitched against a Pink Panther meets It’s A Mad, Mad, Mad, Mad World cartoon sequence (someone’s kindly put the opening titles on YouTube here), in which an animated “funny American astronaut” and a “funny Russian cosmonaut” land on the moon and start getting into fights and chases across the lunar surface, you know you’re in for a madcap comedy of epic and inter-stellar portions. Just scan a few of the lyrics here to find out what a wild and swinging treat you’re in for with this movie...

“Ooh, take me soon.... riiiiiiiiiiide me to the Moon” and “We’ll love the world we land on, and love is what we’ll be making, you know the way we’re flying, me and you”...

... and then, of course, you have to start asking yourself how these kinds of sexy lyrics and grooved up arrangements are “in any way” appropriate to two funny spacemen chasing each other with their nation’s respective flags over the lunar surface... but anyway... sometimes you just have to go with it...

So there you are, you’re all set to enter the world of the movie and you’re fully prepared to watch a sexy riot of laughter and heavy humour as the cartoon moon transforms into the “live action” moon of the opening shot and you’re met with... cold, dead, vaccuous, humourless space. Wow. The pacing has definitely dropped here already. After a while a spaceman picks up some debris for his his spaceship, which gives the main protagonist the chance to prove that the delivery of his lines leaves him as dead and humourless (possibly vaccuous, but I kinda like the guy) as the interstellar constellations outside his beaten up old lunar spacecraft.

Billed as the “first space western” (which it ain’t), Moon Zero Two is actually, as far as I’m concerned, an unrecognised gem of british genre cinema. It’s slow and sluggish and that’s as much as it is to do with the editing and general speed of the camera movements as it is to do with the “trying to come off jokey and fun but ending up deadpan anyway” acting by the main leads. This is not exactly a sharp and funny film... even when you’ve got two well known comic actors playing villanous roles... Warren Mitchell as the evil and exploitational mastermind Mr. 100% Hubbard and his heavy/henchman played by Bernard “Well I only arsked” Bresslaw, perhaps as well known to genre fans for his role as an ice warrior in Doctor Who as he was for his comedy shenanigans.

James Olsen plays the deadpan but, in my opinion, quite watchable in a realistic kitchen sink kind of way, Captain Kemp who gets himself hired by the less than legal Mr. 100% Hubbard to ensure an asteroid made of sapphire is kitted out to land on the dark side of the moon. Along with his faithful Russian engineer/copilot, he also gets involved with a young lady played by Catherine Schell, engaged in trying to find her missing brother who was trying to file a claim for a discovery on a piece of the moon’s surface which also just happens to be where Mr. Hubbard wants our hero to control-crash the asteroid, by a strange coincidence... or is it?

And all the while our hero tries to juggle these two tasks while also keeping out of trouble from his casual sex-buddy, space cop lady played by Adrienne Corri. On the way there are dancing girls, a zero gravity saloon brawl, a skeleton in a space suit, a shoot out on the moon's surface and an excuse for Catherine Schell to strip down to her underwear in order to stay alive (I’m so not complaining about this, by the way). It even has a scene with Michael Ripper in it which, if you’re a Hammer fan, counts for a lot. And if you think this sounds like a great plot and a fun time... well, you’re half right, It does have a classic B-movie plot which is kinda wasted on the presentation, if truth be told, and if ever there was a movie ripe for remaking with a modern sensibility then Moon Zero Two would be it!

Is it fun? Well I find it kinda fun to watch but then again, I’m watching it with a certain amount of fondness that most audiences wouldn’t allow it. So I think, for the majority of people the answer would be a resounding “no”. But it tries so hard and I kinda like it.

Within six years of the movie, a live action TV show by Gerry Anderson started airing on British TV. The show, called Space 1999, had a certain look and feel to it which, frankly, is not a million miles away from what’s on screen here. It wouldn’t surprise me, in fact, if some of the props or costumes were later “procured” for the TV show... although I’m just guessing here. It even had Catherine Schell as a regular alien shape-shifter called Maya in the second series... again, whether they saw her in this movie is anybody’s guess.

For a film which is slow as treacle (which I actually like) and has flat delivery of a lot of the smart one liners... the score by jazz guy Don Ellis, who would go on to score The French Connection films for William Friedkin, is particularly interesting. It’s like the producers realised they had a slow movie on their hands and asked the guy to artificially speed the movie up by making the music more up tempo and exciting, in much the same way that Elmer Bernstein’s score for The Magnificent Seven functions. So right from the start, a shot of the hero just walking across a room becomes full of musical excitement with jazzy pulses and big musical stings on the soundtrack, playing completely innapropriately against the content of the shots. And don’t get me wrong here... I love this score and wish the damned thing was out on CD already... I just think that, for a lot of the running time, it just doesn’t work in the context of the film itself. Which is a shame because I would love to see the kinds of images that could have gone with the music in this movie... which is often feeling like it’s Mickey Mousing* stuff which just isn’t visually present.

All this makes for a very entertaining film as far as I’m concerned and I could watch it often... I just find it entertaining for reasons other than those intended by the producers, I’m afraid. Although I love it dearly, and lets face it, in what other movie do you see two classic comics playing villains who come to a violent end (yeah , right, as if you didn’t see that was coming... they’re the villains!)? I couldn’t bring myself to recommend it for those readers who are into the fine art of movie watching. If, however, you’re like me and you cherish these kinds of spectacular celluloid disasters as much as I do, then you might want to rocket on and catch Moon Zero Two before people forget about this movie completely. It’s a nicely downbeat remedy to a lot of the other stuff kicking around at the time and you might just find yourself smiling more often than you think.

*Mickey Mousing is the practice, often used by film composers even to this day, of catching specific actions in a film with specific notes and stings to further express the timing of an action or enhance it within the context of the movie.