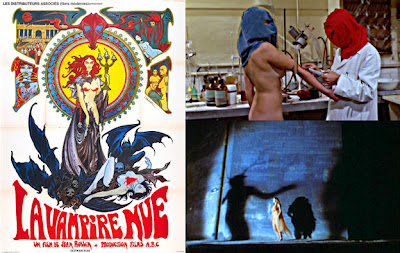 Given that he’s a director I have quite a lot of time for, I can’t quite believe I’ve been writing this blog almost two and a half years and not got around to reviewing any of Rollin’s films on here before. This probably stems from the fact that any UK editions of his movies are rarely worth buying because of censorship issues (at least that’s been the case in the past). Also because of the annoying issue that whenever a country releases any of his titles, and it’s usually Redemption Films releasing them in some incarnation or other, they usually always choose their releases from the same pot of about 10 or so of his movies, and leave most of the rest unseen.

Probably the best DVD treatments I’ve seen are the Dutch Region 2 boxed editions from Encore (which I think is Redemption again) which were mostly 2 or 3 disc editions with absolutely beautiful transfers and stunning packaging. If you’ve not seen any Rollin before then the seven titles they released are the ones to get. Saying that though, there were two new batches of DVD (and BluRay if that’s your kind o’ thing) releases from the US arm of Redemption just recently and, finally, there were two in this lot that I hadn’t seen before... this one, The Nude Vampire, and The Iron Rose (which I’ll be watching sometime soon.

How to describe the movies of Jean Rollin to anyone who hasn’t seen one before?

He also writes books of his obsession with nymph vampires, often involving the characters of a pair of sexy twins, living or undead, who often turn up in some form or another in quite a few of his movies. They’re in this one and at least one of the twins is one of the two introduced in the outrageous shooting clowns car chase scene which opens one of Rollin’s more well known films, Requiem For A Vampire (Vierges et vampires).

It would be true, I think, to say that the acting in most of Rollin's films is quite poor, to be honest. Usually, even though I don’t understand the French, the delivery often seems lacking and the scripts, although languishing perhaps within the realm of something that Michael Moorcock might write when he’s feeling particularly inscrutable, are usually quite dull too... not that there’s usually much pretence of a story in Rollin’s films.

All this is of absolutely no consequence if you’re watching a Rollin film, however, because it’s all about the sheer beauty and surrealism of the shots. You may be put off by a bad special effect (the guns being fired in this one are less technically competent, and their victims less believable, than the average three year old, for example) but you will at many points be startled by the sheer visual poetry and purity of some of the imagery... whether it be two lady vampires dancing to a phonograph, a vampire woman emerging from a grandfather clock to stab you through the chest with her spiky, augmented nipples or two young ladies making use of the whips and chains in an old castle. The imagery in a Rollin film is everything and you will, if you are a lover of the way images are designed in film, find yourself regularly gobsmacked by the richness of his creative and sometimes provocative palette when watching his films. I think his first film, the black and white Rape Of The Vampire (Le Viol Du Vampire) even caused a bit of a riot on its preview, although I can’t now find any evidence of that when I looked for it. I can never quite figure out if the Jason Schwartsman character in CQ is modelled after Rollin or Polanski (or possibly a mixture of the two).

Now I’d read somewhere that The Nude Vampire is not one of Rollin’s best films and, after having seen the thing for myself... I’d have to say that, actually, it is another Rollin classic which I’m sure I will watch as often as I have his other works. If only because of the first twenty minutes which is absolutely loaded with devastatingly gorgeous imagery such as naked blood transfusions and people wearing either colourful hoods or animal masks and also, and this is kind of unusual for Rollin, a fairly accessible storyline in the making which is, yeah okay, quite simple, but which is a lot more than you might get in many of Rollin’s other movies... his films tend to have great portions of their running times without any dialogue in them as a rule.

Seriously, the colours and lighting in this film,especially at the start, looks like Mario Bava has been let loose with a box of crayons and then Rollin has copied them but filtered them through the eyes of Max Ernst... there’s a visual opulence that almost defies description filling the frames and, to be honest, the story is the last thing on your mind as you watch the mystery of a captive vampire, a curious son and a suicide cult unfold.

As the film progresses, some of the story, what there is of it, drags a little and we are faced with the dilemma of a fair amount of nudity on display (true to form) but not by the title character. In fact, as the clash between the main male protagonist’s father, who is seeking the secret of eternal life through study and experimentation on the female vampire he has captive, and the clan of vampires who seek to rescue her from his (and his scientist friends) clutches reaches its zenith, you are then hit with the concept that really, they are not vampires at all and only appear so because of the way the human characters have viewed them.

So, yeah, there’s no way of getting around this but... for a film called The Nude Vampire... there really aren't any nude vampires actually in it, if truth be told. It has to be said, I think. Although you could obviously stretch a point and say that fang bearing, blood drinking creatures are, by definition, automatically vampires and the nudity in question is their naked soul at odds with the primitive superstitions and prejudices of mankind. You could say that, yeah... but someone might punch you in the mouth so you’re probably best keeping quiet on the metaphorical front on this one maybe.

Nevertheless... vampires or no, The Nude Vampire is one heck of a good Jean Rollin art piece, as you might expect from him, and if Rollin is your thing then I really don’t think you’ll be disappointed by this one. Don’t get me wrong, it’s not the most accessible in tone (although certainly in the pretence of a linear storyline, it is) and there are other Rollin movies I’d point you in the direction of first if you’ve never seen one before.. but this movie doesn’t seem to deserve the reputation it’s been left with in recent decades, it seems to me. Also, for fans of this artists cinema, it bridges the gap contextually for you between his first feature length production, the aforementioned Rape Of The Vampire (Le Viol Du Vampire) and his next one after this, The Shiver Of The Vampires (Le Frisson Des Vampires), being as it’s his second feature and his first shot in colour.

If you’re not familiar with the work of this French auteur then go watch something else like Le Viol Du Vampire or Fascination first. If, however, you’re already a Jean Rollin devotee, you really can’t go wrong in picking this one up.

Labels: Brigitte Lahaie, Emmanuelle 6, Fascination, Jean Rollin, Rape Of The Vampire, Requiem For A Vampire, Shiver Of The Vampires, The Iron Rose, The Living Dead Girl, The Nude Vampire