The Saint In New York 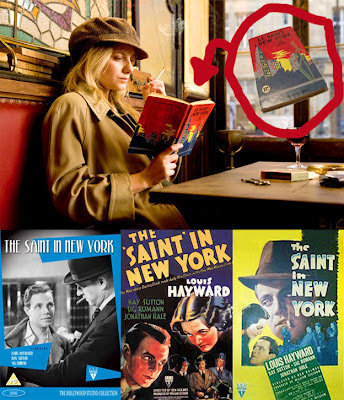 When I first went to see Tarantino’s excellent Inglorious Basterds at the cinema (the first of many cinema trips to see that shiny opus), I was delighted to notice that the main female protagonist, Shosanna, was sitting in a cafe in France reading a copy of Leslie Charteris’ novel The Saint In New York in one scene (I think that’s about the sixteenth in the long running series of books). Delighted because it took me back to my youth in two ways...

First to those old BBC2 5.40pm weekday showings of The Saint movies in the late 1970s/early 1980s. This was a popular dinner-time slot as they would have a regular series of films or serials at this time of night and we all used to watch them. Asides from serials like Daredevils Of The Red Circle, Hawk Of The Wilderness or Undersea Kingdom, Auntie Beeb also showed us as full runs as they were able to of Charlie Chan, The Saint and The Falcon movies from the 1930s and 1940s.

Secondly, it took me back to the discovery of a second hand book shop, about 25 minutes walk from my school, which I discovered a number of years after these movies. It was a great shop, a real treasure chest of gazillions of books in four or five rooms (a converted house), owned by a lady with whom I used to have many literary chats. But it was unusual in that it would only open its doors on a Thursday afternoon (most Thursdays... not all) and so you only had a small window of opportunity per week to visit. By then I also had a Saturday job so I had some small (very small income) but this was in the days when you could pick up some really great second hand books for 20p to 30p a pop. So, yeah, I used to take a carrier bag with me and go off, on a weekly basis with a half a dozen books or more... three of which, at least, would be read by the end of the week (I used to read a lot more than I do these days... sadly).

Here I would pick up literally dozens of Doc Savage novels (those brilliant, black spined Bantam reprints from the 60s and 70s) along with a helping of the Modesty Blaise novels, The Shadow novels, the “Harry Palmer” novels, the James Bond novels, the Quiller novels, the Boysie Oakes novels, the Conan novels, Michael Moorcock’s novels, Philip K. Dick’s novels... and around about 30 to 40 of the old editions of The Saint novels... all of which I loved.

Now I remembered watching the old Roger Moore series as a kid on telly, but these novels (and what I could remember of the films) were quite a bit different in style to those. I loved The Saint character in these books because he was so light hearted, thumbed his nose at all authority and talked absolute nonsense to people as he took the p*** out of the poor criminals he would go up against. Of course The Saint was a thief himself, but he only concentrated on plundering those who deserved it (criminals themselves, usually) or possibly the rich folk who wouldn’t really miss it (if memory served). I was (and still am), very much into The Marx Brothers at the time and the character as portrayed in the books had a very Groucho Marx/Bugs Bunny attitude to him... while still being a deadly fellow you wouldn’t want to come up against in a fight. He’d outsmart you.

Of all The Saint movies I saw as a kid, I remember this very first one, starring Louis Hayward as Simon Templar/The Saint (sometimes, he also used the alias Sebastian Tombs to get his St. designation from his initials) as being the absolute best of the bunch in terms of the actual character as read in the books up there on the screen. Hayward plays him as light and fluffy (and as deadly) as in the original stories, which were obviously contemporary literature of the time. Unfortunately, George Sanders would take over the role after this first one, followed later by Hugh Sinclair. Louis Hayward would return to the role once more in the fifties (although the DVD companies seem to be a bit shy about remembering that fact in their liner notes at the moment, for some reason) in The Saints Return aka The Saint’s Girl Friday (1953) in some kind of bizarre Hammer films/RKO co-production from what I can make out (the IMDB is even a bit sketchy on this... anyone know the full details?). I’m not sure if I’ve actually seen that one or not and, as far as I can tell, it’s never been released on home video... no doubt due to a rights issue, I would expect. This is, of course, much more criminal than the acts of the gangsters and thugs that Simon Templar would find himself crossing paths with and a commercially available DVD should be made available immediately, in my humble opinion.

Anyway, as I was saying, nobody quite captured the spirit of The Saint as Louis Hayward did in The Saint In New York. The film is typical of its era, although I believe it had a certain amount of trouble in the violence stakes at the time... there’s a lot of shooting in this one. But perhaps it’s the attitude towards the casual killing of ones enemies that may have rankled the censors and critics of the time... The Saint does cold bloodedly execute a criminal without warning... sniping him while disguised as a nun, no less. Also, at one point, The Saint uses a criminal’s body as a shield while he reaches for a gun to take down the other shooter himself... not very practical in terms of actually being a shield but the movie does have the little touch of realism that Templar takes a bullet in the shoulder for his trouble.

The dialogue is very true to the spirit of the novels too... the witty banter singing itself off the screen almost like a 1930s screwball comedy, which were also contemporaneous to this movie and novel, of course. From what I can remember, nobody does it better, and I shall see how the George Sanders movies hold up to this formula very soon as I have them all on a Warner Archives edition ready to watch.

Added to all this is the shadowy chiaroscuro stylistic element of a film noir... perhaps a bit early for this kind of darkened, shadowy style of lightning if you believe the text books on film history, but not so early, in my opinion, that the lightning lessons from those early German Expressionist cinematographers who I personally think helped build the foundations of “American Film Noir”, weren’t already in practice in the US. Either that or the ODEON DVD transfer and print are muddier than I was expecting. There’s even has a bit of a tragic ending in this one where... oh no, I’d better not tell you. You need to see this one for yourself.

If you’ve never seen any of The Saint movies before, then this one is definitely the one to start off with... it’s a doozy. If, however, you only know the character in film from the George Sanders sequels which carried the series forward, then you really owe it to yourself to see the original flick. The first in a long line of actors who would play the character on screen... Louis did it the best.